I am a designer 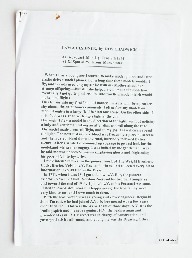 I am a designer

Transcript of a radio broadcast given by Lancaster bomber designer Roy Chadwick describing his early interest in aviation making aircraft models, joining Avro’s as personal assistant and early work of company. Notes that many early employees now have important positions in aviation. Continues about the aeroplanes he designed including a mention of the Lancaster, the details of which at that time were still secret.

When I was a youngster I started to make model gliders and later elastic driven model planes. For a long time these models wouldn't fly, and friends used to sympathise with my Mother about her strange offspring—but still she helped me to make the models— eventually I got quite good results, and finally a model which would make long flights.
This led me into my first "spot of bother" in Aviation: being rather shy about the neighbours [sic] comments, I often flew my models on moonlit nights in a large field behind our house. On the other side of this field was a road with a gas light at the end.
One night I flew a model in the direction of the light, without noticing a lady and gentleman taking an after dinner stroll along the road. The model made a record flight, and to my joy, I saw it circle round the light. The next instant, my blood was frozen by a piercing scream and the lady vanished down the road, hurriedly followed by her escort. After a while I summoned up courage to go and look for the model,and [sic] whilst thus engaged, was hailed by the gentleman: what he told me was nobody's business....playing ghosts and frightening his poor wife into hysterics.
I took intense interest in the pioneer work of The Wright Brothers, Cody, Bleriot, Voisin, A. V. Roe and others, and collected every bit of information I could find in the Press.
In 1911, when I was 18, I got to know A.V. Roe, the pioneer aviator. (Now Sir Alliott Verdon-Roe) and his brother Humphrey, and toward the end of 1911, I joined A.V. as his Personal Assistant.
Then followed strenuous but happy years; the Roe family were very kind to me, and I owe much to them.
With the Roe brothers was a young and clever engineer: Reginald John Parrott, who had joined A.V. before me and was a few years older than me. This was the Avro Team of those days: A.V. was the leading spirit and inventive genius; H. V. the businessman and provider of cash, R.J. Parrott was in charge of construction, and gave good advice all round, and young me was the Drawing Office

staff. Later, I was joined by H.E.Broadsmith, who is now The Managing Director of Saunders Roe Ltd.
We had a small staff of skilled and enthusiastic workmen, who produced a beautifully finished job from the minimum of drawings.
We all worked in the cellar of an old mill in Ancoats, Manchester. What a contrast between those few men and that poor cellar, and Avro's huge, modern works and thousands of employees today!
An interesting sidelight of those days is the fact that Avros [sic] bridged the gap from the earliest engineering to the most modern. Our power came from an old Beam Engine. I should think that Avros [sic] are the only aviation firm who have ever driven their machinery off an old beam engine.
In 1913 A.V. Roe and Co Ltd was formed, and we moved into a small works at Newton Heath, the finance being provided by Mr James Groves. Here the world famous Avro 504 was designed and built in 1913. I believe that until this war, the old "504" held the All Time record for numbers built of one type, and for length of time in service. I actually saw one flying quite recently at an R.A.F. aerodrome.
Our Test pilot in the early days was F.P.Raynham: certainly one of the finest pilots who ever new [flew?] an aeroplane, and he still flies. I made many flights as Observer with him, some of them more exciting than pleasant when things went wrong with experimental machines.
When the 1914-1918 war started, Avros [sic] suddenly became of national importance: the knowledge we had gained was then invaluable, and The Admiralty and War Office called for aeroplanes in large numbers. Our staff expanded enormously, and I soon found myself in charge of a hundred draughtsmen, none of whom knew anything about aeroplanes, and I had the job of teaching them all I knew in those days.
Many of these men stayed with us for years, and a number of them now hold important positions in the aircraft industry; amongst them my old friend R.H. Dobson, who has risen to become Managing Director of the Company.
In 1915 we conceived the idea of a large, twin-engined Bi-plane with a gun station in the nose of the fuselage, ahead of the pilot, and another gun station aft of the wings, on top of the fuselage. This aeroplane also had internal stowage for bombs. We placed the drawings before Captain Clark of the War Office, and we were instructed to proceed with the construction of an experimental aeroplane on these lines.

This machine was called The Avro Pike and was a forerunner of that arrangement of aeroplane which was used for many years by all countries. Unfortunately, the demand for our Type 504 was so enormous, that we could never put into production, this twin engined war type; although we did carry on with developments of it, producing about four experimental types, each an improvement on the last.
After the war, I designed the first of the modern, light aeroplanes: The "Avro Baby. [sic] This had a 35hp "Green" engine, and, flown by Bert Hinkler, made a non stop flight across the Alps to Turin in Italy.
In 1923 I designed the Avro Ava, which was the largest, all steel aeroplane to be built at that time, and for a good while afterwards. It had a span of 100 ft and was powered by two Napier Lion engines.
In 1926 I designed the first aeroplane to be fitted with a 1,000 Horse Power engine. This was the Avro Aldershot with a Napier "Cub" engine.
When Sen: Juan [sic] de la Cierva came to England with his Autogiro, Avros [sic] were greatly interested in this development, and I collaborated with him in the design of several types of this very interesting type of flying machine.
In 1926, after studying carefully the various types of aeroplane construction, then in vogue, I decided that the future way of constructing aeroplanes would be the All Metal, stressed skin
method. I incorporated this type of construction in the AVRO AVOCET an experimental type which we built for the Air Ministry and in a second type in 1927: The Avro Antelope. Unfortunately, I could not persuade anyone that this method of construction was the best, and I had to abandon it for about ten years, although as most of you know, this type of construction is now almost universally employed. So you will see that even in such a rapidly advancing department of engineering as Aviation, one mustn't try to go too fast
Altogether, I have been resposible [sic] for the design of over thirty types of aeroplane (Roy Chadwick was to design SIX more aeroplanes:The York, the Lincoln, The Lancastrian, The Shackleton The Tudor and the Vulcan, before his untimely death on a test flight in 1947 at the age of 54)
Ranging from a tiny machine with a 2 1/2 HP cycle engine, which actually flew to a height of over 14,000 ft: to a modern, multi engined monoplane of over 6,000 horse power.
Those types include Landplanes, Seaplanes, and ship borne planes, Monoplanes, Biplanes, Triplanes, Military machines, and Civil machines; it's all been very interesting.
The design features in which I am most interested, are Control and Flying characteristics, and methods of construction. Absolute speed has never greatly attracted me, although I strive to obtain the best possible all-round performance from each new type, [sic]
The design of the complex modern aeroplane calls for the efforts of a large number of design engineers, and I'm grateful for the unstinting help of my Team: Messrs Rogerson , Turner, Cameron, Willis and Atkin. Also our staff of technical assistants, draughtsmen,and [sic] tracers, and our Test Pilots, Captain Sam Brown, and Mr Thorn.
As a Lancastrian man, and particularly, a Mancunian, I've always striven to maintain Lancashire's position in the world of aviation, I hope with some success.
Avro aeroplanes in this War, are The ANSON, affectionately known as "Faithful Annie" the Manchester, which is our most powerful twin-engined bomber in service, and lastly The Lancaster, our newest four engined bomber, which the gallant pilots and air crews of the RAF, flew to Augsberg in that epic daylight raid. I cannot for reasons of secrecy give you any details of this new aircraft in which I, naturally, take great pride, and believe that it will prove to be a deadly weapon in the handa [sic] of The Royal Air Force.
I would say to young engineers, aeroplane design and construction is the most fascinating, absorbing, exciting, heartbreaking business in the world. "Go to it" and you will not really require any other hobby to keep you occupied in your spare time, as you won't have any!
GOODNIGHT.