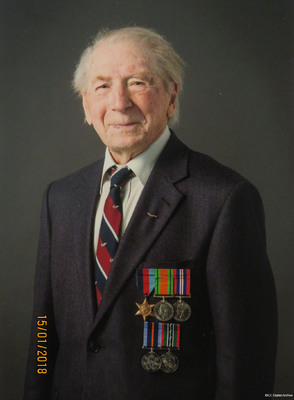 Maurice Askew volunteered for the RAF and began training as a flight engineer. He was posted to 207 Squadron at RAF Spilsby and his first operation was to Berlin. On his last operation his aircraft came under attack. He was knocked unconscious as he baled out of the aircraft and regained consciousness just before he landed on snow which he first thought was the sea because of the appearance of waves. After a varied post war career Maurice became a set designer for Granada television before emigrating to New Zealand. His memoirs were published under the title, “No Caviar for a Kingfisher.”