58 items. An album of photographs, newspaper clippings and papers relating to Mieczysław Stachiewicz's escape from Poland through Romania, Greece, and France to Great Britain, and his tour of operations as a pilot with 301 Squadron from RAF Hemswell. The album also contains photographs of his friends and family.

These items were digitised by a third-party using technical specifications and operational protocols that may differ from those used by the IBCC Digital Archive. 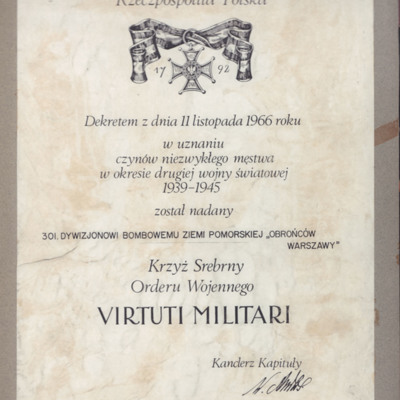 Mieczysław Stachiewicz Introduction to his album 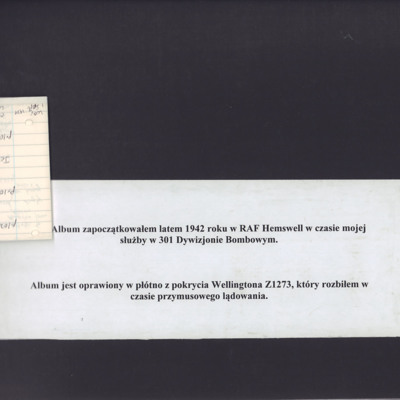 'Mieczysław Stachiewicz started the album in the summer of 1942 at RAF Hemswell during my service with 301 Squadron. The album is bound in a canvas from Wellington Z1273.' [translated]. There is also a handwritten note in English with page… 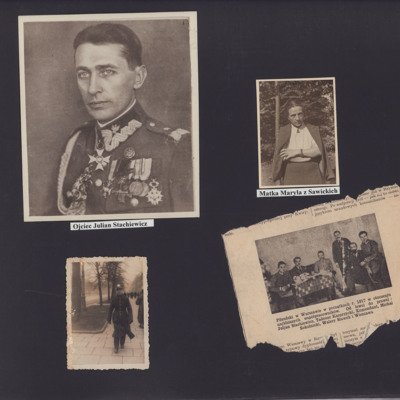 Photo 1 is a head and shoulders portrait of Ojciec Julian Stachiewicz. He is in uniform and is wearing many medals.
Photo 2 is a half length portrait of a woman, Matka Maryla z Sawickich with her arms crossed. Behind is a garden.
Photo 3 is a young…

Baptismal entry from the cathedral of St. John in Warsaw 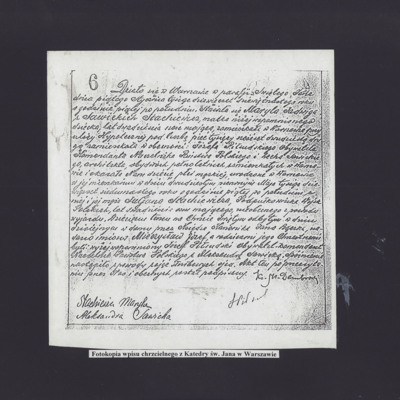 A written statement describing the christening of a child that took place in a family home in Warszawa. There had been a long delay as the Father had been away. The Godfather was Józef Piłsudski the Commander in chief of the Polish State. It is a… 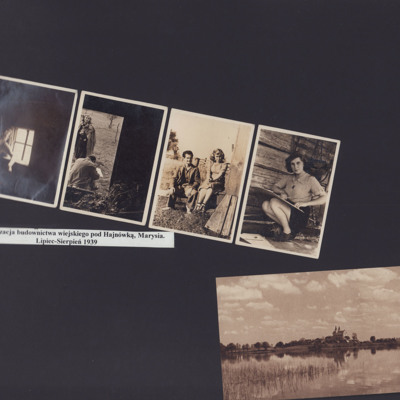 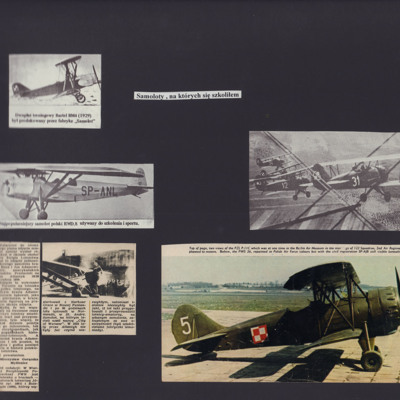 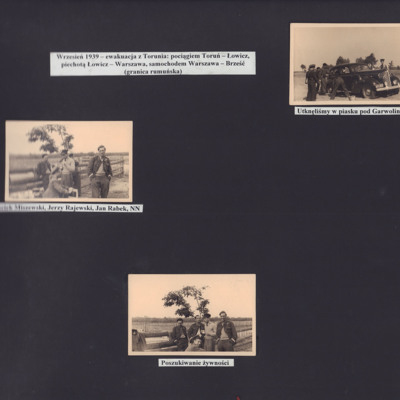 Photo 1 is a group of people round the back of a car, annotated:
We got stuck in the sand near Garwolin.
Photo 2 is five people with a caption with their names 'Maciek Miszewski, Jerzy Rajewski, Jan Rabek NN.
Photo 3 is the same group as photo 2… 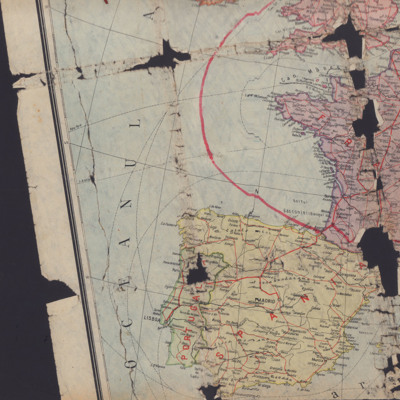 Two maps of Europe, the first is of France, Spain and the south of England. The second covers Poland to Greece and Italy. A red line has been added to mark some countries. 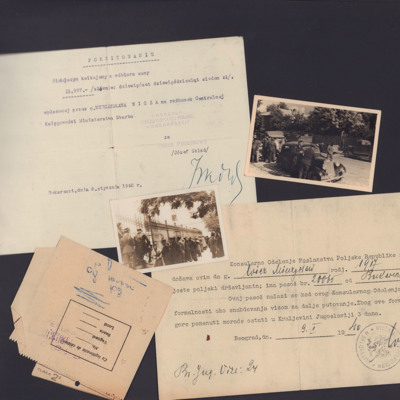 Items written in three different languages: Polish, Serbian and Romanian.
Item 1 is a receipt for money paid to the Treasury in Bucharest written in Polish, dated 8 January 1940.
Item 2 is a photo of a queue outside railings with soldiers… 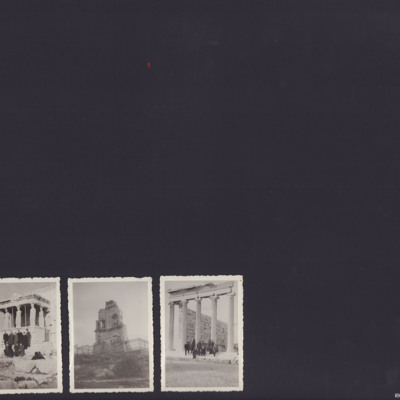 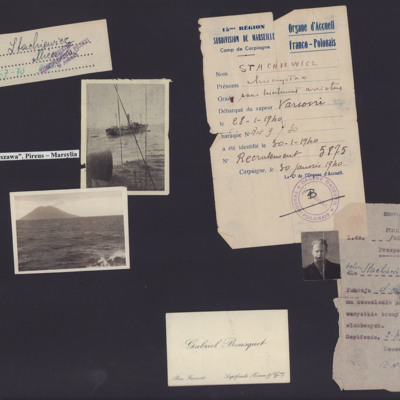 Documents relating to a sea voyage from Greece to Marseilles.
Item 1 is a ticket with a handwritten name and cabin number.
Item 2 is a ship taken from another ship.
Item 3 is a ticket referring to Mieczysław Stachiewicz and issued by Organe… 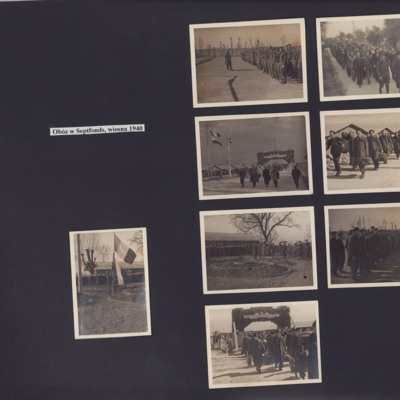 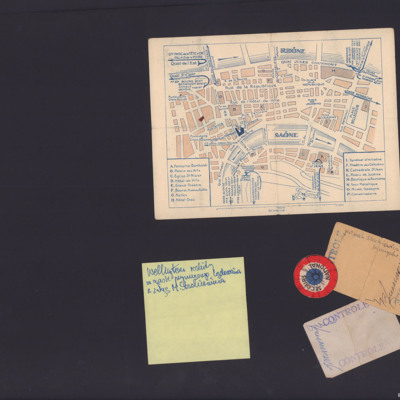 Item 1 is a map of the centre of Lyons.
Item 2 is a post it note in Polish.
Item 3 and 4 are small tickets marked 'Controle' with Mieczysław Stachiewicz name handwritten on.
Item 5 is a badge in red, white and blue with 'Secours National' -… 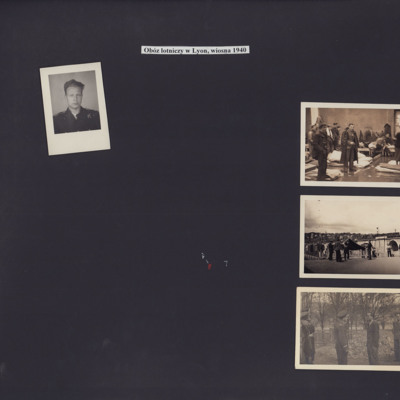 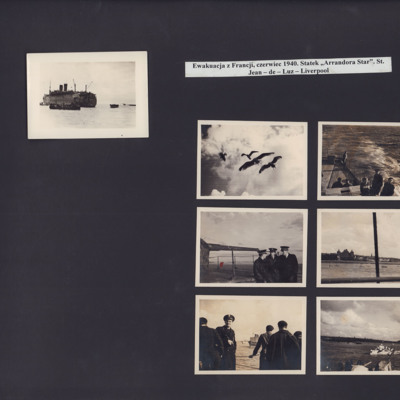 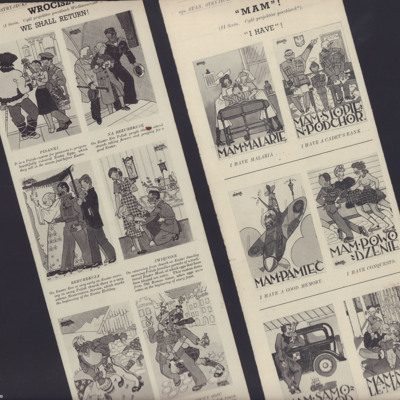 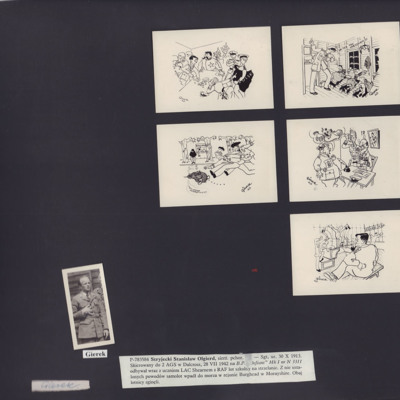 Item 1 is a half length portrait of Gierek
Item 2 is a political cartoon with Jo Stalin, Hitler, Nazis and a soldier with Poland under his arm. They appear to be gambling for Poland.
Item 3 is an officer shouting at three people on beds on the… 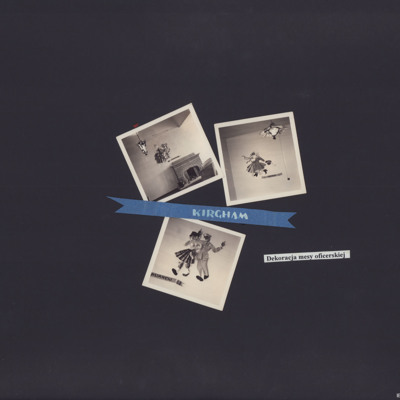 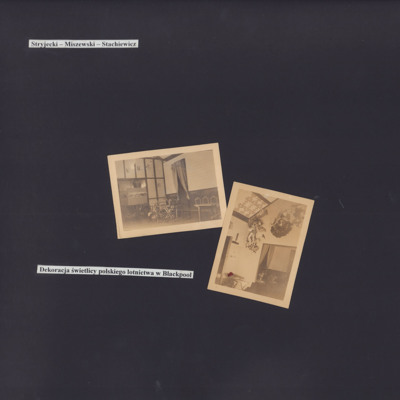 Two photographs of the interior of the Officer's Mess at Blackpool..

Blackpool Art and Airmen on the March 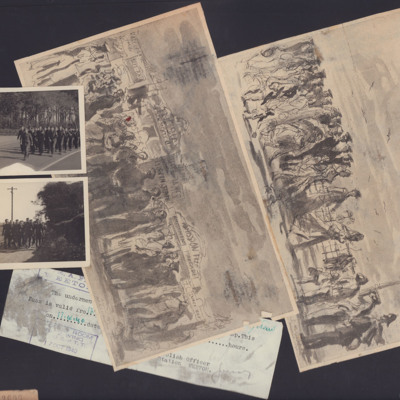 Items 1 and 2 are black and white paintings of Blacpool street scenes.
Items 3 and 4 are airmen marching.
Item 5 is a pass from RAF Weeton, dated 17 October 1940. 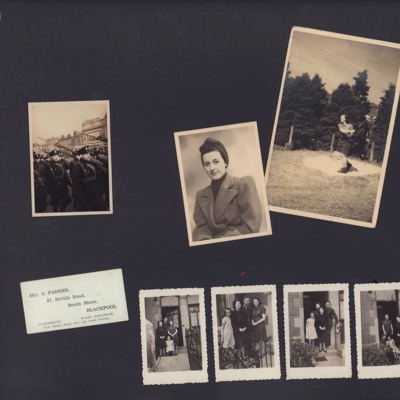 Photo 1 is a group of Polish airmen marching along the promenade at Blackpool. In the background is Tussauds.
Photo 2 is a half length portrait of a civilian woman in a coat. She has an RAF badge and is wearing a head scarf.
Photo 3 is a person in… 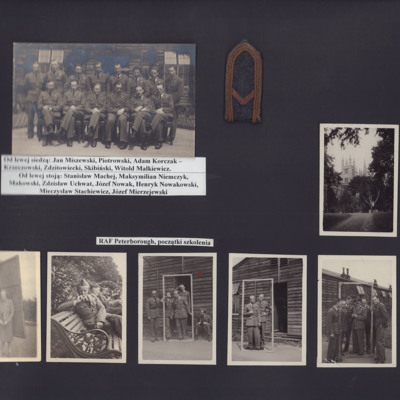 Photo 1 is 14 airmen arranged in two rows. Underneath each airmen is identified.
Photo 2 is Peterborough Cathedral.
Photo 3 is two women and a dog standing at the back of a van.
Photo 4 is a sergeant sitting on a bench, smoking. Behind are other…

Item 1 is a chit stating that Mieczysław Stachiewicz has applied for an Identity Card, dated 1.11.41
Item 2 is a photograph of a Wellington in flight.
Item 3 is a sketch for a flight from Bromcote to Yorkshire (Gool), Carlisle, Isle of Man, North… 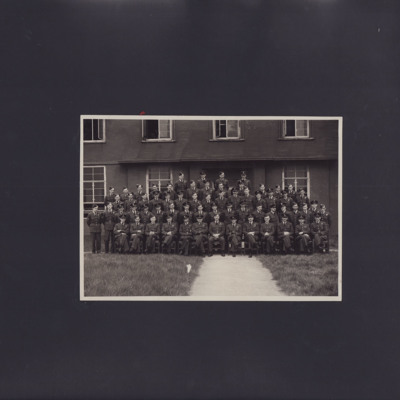 Group of airmen, arranged in five rows. Behind is a large building. 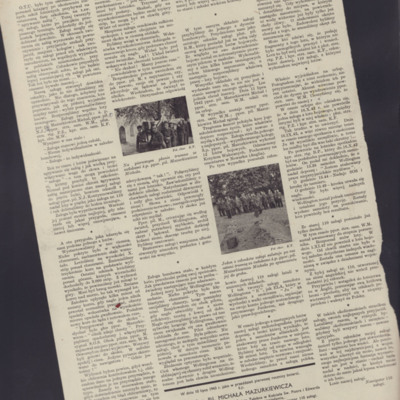 Newspaper cutting, in Polish, describing the activities of a Polish airman in the UK.
View all 58 items