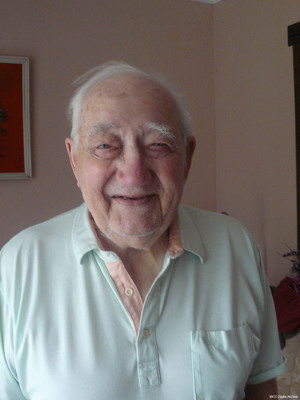 Jeff Hildreth grew up in a colliery village where his father was a miner. When he left school he started working at a tailor’s shop. He didn’t enjoy working in the shop and was happy to volunteer for the RAF and was accepted for to train as a pilot, navigator or bomb aimer. He considered the length of time for training and decided that being a wireless operator would get him operational quickly and would suit him best. When he crewed up he was happy that his pilot and two gunners were all instructors and so he admits happily that this increased his confidence. On one operation they were attacked by a Fokke Wulf 190 which they shot down. He recalls that during briefing they were told of the crews that had not returned and as they had returned they began to have a false sense of being lucky. After the war Jeff became an engineer with the East Midlands Electricity Board.