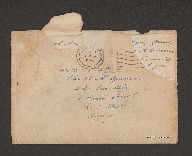 Stanley Norton comments on Geoffrey Norton's training, he describes his last leave and going to the cinema with Dorothy, to the theatre with Eve, to a dance with Dorothy, lots of domestic activity and news.

Dear Geoff,
Thanks a lot kid for your letter which was waiting for me when I arrived back home today.

I'm glad you are getting on O.K. with the course, and that it's not so difficult as the first. You are having some bad luck as regards the flying, but you will no doubt be able to get it all done when you get some good weather. I don't suppose you will worry about flying on Sunday as I expect you would rather be doing that than staying up all night

I hope you get on alright in the Harwell boxes, as they are the nearest thing to actual air operating.

I am getting on o.k. and am enjoying my leave. I managed to get away from camp on Sunday morning but owing to the rotten train service on Sundays I didn't get home until just before midnight, so I had to knock Mother up. On Monday morning I stayed in, and then went to town in the afternoon, but there wasn't anything to buy. At night I went to the cinema with Dorothy, and we went to the Savoy to see "Kings Row," and it was a very good show. On Tuesday morning I went to fetch Mother's train ticket, as she went on the lunchtime train. I stayed in during the afternoon, as I had quite a few things to do. [deleted] On [/deleted] At night Pete was playing at a dance, so Eve and I went to

the Theatre to see "Date in Tunis", the two principals being Leslie Fuller[?] and Maisie Weldon and it was a very good show. I was very busy on Wednesday morning, as I had to make the fire, make the beds, and clean the [deleted] beds [/undeleted] place up a bit. By the time I had done this and washed up, it was time to set the table for dinner. In the afternoon I went to the Ritz to see Abbott and Costello in "Money for Jam," and it was very good, although not as funny as they usually are. In the evening I went with Dorothy to a dance at the Assembly Rooms, and had a really good time. On Thursday morning I had to get up early to catch the 9.24 train to Derby, and I didn't have much time, not even time for breakfast. I got there about 11.30 and little Hilary was fast asleep. She is a lovely little thing and has been really good. I went into Derby in the afternoon to do some shopping, but the only thing I bought was this writing stuff, and I was lucky to get this. I stayed in at night and then went for a walk with Ray to the fish shop for [deleted]one indecipherableword[/deleted] our suppers. Ray and I slept upstairs and May Mother and Hilary

downstairs, and I never heard a murmur from baby all night. This morning we were dashing about and everyone was in in a flat spin. I had ordered a taxi, and it came at 10.15, so when we got to the station we had about twenty minutes to wait before the train came in. Anyhow, we managed to get a seat, but Hilary didn't like all the noise on the station and she [deleted] didn't [/deleted] yelled quite a lot, but was much quieter when the train started. We had to change at Nottingham, and we got in an empty carriage, so we had a good journey. May had written and asked Mrs. Burrows if she would get a taxi to meet us, and when we got to Lincoln this great big car was waiting for us, so we weren't long being whisked home. Mrs. Burrows was at our house, and had got a cooked dinner waiting for us, so we were very thankful [deleted]one indecipherable word [/deleted] as we were nearly famished. This afternoon May and I had Hilary in the pram and we went to Giles and to the post

office, and baby was asleep all the time. We had just had tea when Eve came home, then Mrs. Collins popped in to see them. Auntie Eliza and Martha then came, and they were followed by Mrs. Burrows, so you may guess that we had a housefull.[sic] Everyone was delighted with Hilary, and I expect you will notice a difference in her when you come home again. After baby had been [deleted] ?one indecipherable word[/deleted] put to bed they all went, so we are nice and quiet now, and Eve and Pete have gone on their bikes to the fish shop. That is a complete diary of my activities since I came home, and I hope it hasn't bored you.

If it is fine tomorrow I may go to Nottingham for the day as I want to do some Xmas shopping. There is also a match on, as the County are playing Forest, so it should be good. If I don't go, I shall go to

the match here, as City are playing Grimsby. The latter are hoping to have the services of Ronald Dix, the international inside forward, so it should be a good game. City are fielding practically the same team that beat Mansfield last week, so Lello who scored four last week may put up another good show.

I shall be returning to camp on Monday, so write to me there.

Everyone sends their love, and Mother will be writing at the weekend.

I managed to get a new valve from Woodheads, and the radio goes quite well now.

Well kid, I guess thats [sic] all the news from home, so cheerio, keep smiling, and safe flying