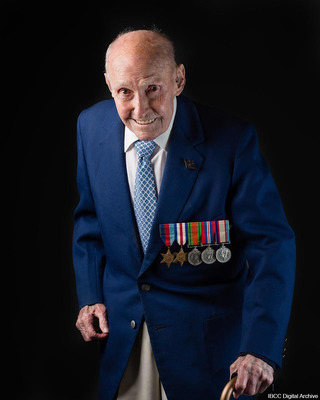 James Calman was born in New Zealand but grew up in Australia. After training as a pilot he spent four years as an instructor. He flew three operations as a pilot with 106 Squadron from RAF Metheringham.

JM: Well, fortunately, you didn’t have to —
JC: No, I did not.
JM: [?]
JC: I think due to the navigator being engaged with his legal duties, we didn’t do as many operations as we should have, that kept me alive, I think [laughs].
JM: Well, that’s the other side of it, because there was an enormous amount of loss of life —
JC: Oh, wasn’t there. Fifty percent wasn’t it?
JM: Injury and all the rest of it. In fact, the Australians ended up, some of the highest —
JC: Yes —
JM: Proportionally was the highest rate of injury and death.
JC: I used to go to London on leave, and I’d see aircrew with no nose, just two nostrils, like a pig, been burnt by fire. Bloody terrible.
JM: So, when, when you, how did — how many times would you have gone to London?
JC: Oh, quite a while. I was in favour of, of the manager of the Strand Palace Hotel, and where ordinary people were restricted to five days there because of the congestion, he let me stay on, you know, and er, and the girls used to come down from Nottingham and Doncaster, where they worked in factories and they’d leave in five days and new batch would come in you know. It was very convenient [laughs].
JM: So, the manager of the Strand Hotel was, became a good friend?
JC: Yes, he did, I forget his name, but he gave me privileges there yeah.
JM: Did you keep any contact with him after the war?
JC: No, no I did not, I did not. I was a lousy letter writer. My mum had to write to Fairburn, the minister for air, to find out if I was still alive, because I didn’t correspond with her. I was just bad at letter writing. I er. Just didn’t have any desire to do it.
JM: Oh, well. Each, each person has their own little —
JC: {laughs} and idiosyncrasies {laughs}
JM: And interests, and interest, that, that, err. So, how did you find London, did you have lots to do, when you — did you have any official—
JC: I used to go to the show, you know, err, they had the ‘Dancing Year’ on, I forget the actor that was in it. And they had the Windmill Theatre which never closed. You had the girls that were naked on stage. They were allowed to be naked if they didn’t move, you know. And we used to get in there and jump across the seats to get the front row view [laughs]. The Windmill Theatre.
JM: Many —
JC: Have you heard of it?
JM: I have heard of it. Many happy times, I think probably, were spent, by many service men that were there —
JC: Yeah.
JM: I’m sure. And what other sights did you used to —
JC: Well, well er, they used to take Australian air crew to visit people you know. To accommodate them in their homes, and I was sent to a place called Lyme Regis, near Cornwall to a Doctor Cook’s residence. He used to go out doing his daily chores, and he would come back with something good like a chicken or a pheasant, you know, it was very good there, I was there for about a fortnight, yes. Lyme Regis was the name of the place. South of England, near Cornwall yeah.
JM: Very good. That would have shown you a bit of country life.
JC: Yes, and I also, also put me uniform in dock and went to Ireland for five days, as a civilian, because they were neutral, as you know, and you weren’t allowed to be in uniform in Ireland. And er, I went over there, and I, I met quite, few people, one particular fellow, Bill Willis, was his name, he was, he stayed there after the first world war, and er, he opened a restaurant called the Green Rooster, and I went in there one day to have something to eat, and he came up and he said, ‘there’s a smell of Australians about here’, he recognised my Australian accent and he made a friend of me. He took me home to his place, and taught me to drink Irish Whiskey and he, he took me to Beldoyle race course, where the held the Irish sweepstakes, you know. He befriended me very much did Bill Willis. Yeah. I haven’t seen him. I didn’t contact him, no.
JM: Well, that’s a bit of a variety of experiences.
JC: Yeah, they used to burn peat there to keep warm. In winter, peat, P E A T.
JM: That’s right. Absolutely. What other sorts of places did you go to?
JC: Mostly London. Mostly London.

JM: Mostly London. Always staying at the Strand?
JC: Yeah, yeah, yeah, yeah. Always stayed at the Strand cos’ I was okay with this manager. He used to play golf, and I was a golfer, and err, you know, we got on well together.
JM: So, did you have a few rounds somewhere?
JC: Er, I think so. I can’t remember, vaguely. There used to be a place called Chingwood, Chinkwood, and I used to go out there and practice, you know, practice. You weren’t allowed, er, there were wheat fields, besides the course, and er, they wanted them protected, you weren’t allowed to go in there, but I used to jump the bloody fence and go in there and find balls, golf balls, yeah. Chingwood, yeah.
JM: I’m sure there would have been a few balls in the —
JC- Yeah, yeah —
JM: Wheat paddock.
JC: You weren’t allowed to go in there.
JM: Alright, interesting. Perhaps we stop a minute, while you have your cup of coffee there.
JC: Are you going to have something?
JM: No, I’m fine, fine. {recording ceases], Okay, so we’ll pick up now —
JC: Well, I was a flying instructor, a pilot instructor at Southam, Southam, in Warwickshire and I was teaching er, air crew to be pilots, and on this occasion, I was a bit bored, you know, taking off and landing, and I lost a bit of concentration, and the aircraft took off and it didn’t get airborne, instead of the air flow going around the wings, it was all jumbled and they called it an incipient spin off the deck and the bloody thing landed, and the exhaust pipe was a long one and it was red hot, being an exhaust pipe and the plane caught on fire. The pupil and I scrambled out of it with a few blisters through the heat, and that was the only injury that we had, and er, the bloody aircraft was damaged, completely burnt out.
JM: I was going to say —
JC: Er, I got bored, and lost concentration. I shouldn’t have done it, I was responsible, I was the instructor and he was the pupil, and he agreed to keep flying with me after all, you know, he might have said ‘I don’t want to go with him anymore’, but he agreed to keep flying with me. That’s the story, is that the one you want?
JM: Uh huh. Good, that’s very good.
JC: I think I was very lucky to, to, not to get hurt, you know, with the aircraft catching on fire.
JM: Yes, indeed. And what, um, — when you came back to Australia and you err, um, had your MG’s and all the rest of it, where you selling them or?
JC: Yes, I had a car yard, MG’s and Austin Healeys, all sports cars, Jaguars, yeah.
JM: How, how long did you have that?
JC: For about five years I think? Yes.
JM: And after that?
JC: Well then, then, I, I, moved up the road a bit, that was at 600 Prince’s Highway. I had another car yard, just up the road at 614. The Good Guys have bought the land now, and they’re going to start a store there although I see they’re going to be taken over the Good Guys, by err, someone else.
JM: [?] hi fi.
JC: Yeah, hi fi, yeah. Err, what am I getting at?
Other: So, what did you do after the car yard?
JM: So, you had the second car yard. How long did you have the second car yard for?
JC: About four years, five years. I built a shed there. I built a great big workshop. Forty feet by twenty feet. I built it meself.
JM: Goodness.
JC: And I rented it from the council for twenty dollars a week, and I was there there until the fire came and destroyed it all.
JM: And what, what did you do after that?
JC: I, I went to TAFE and I did a course on spray painting and panel beating. And, er, I was pretty good there, they made me a part time instructor, on er, colour matching, and spray painting. I forget his name now, the boss man that got me the job, Jim, Jim Devlin, that was his name, Devlin. He was the boss of the spray painting joint, and I was casual instructor there, you know. Yeah.
JM: How long did you do that for?
JC: Er [pause], was that, er, did I, just escapes me at the minute, escapes me. I think I did that until I got called up from pilot instructing to operational training. I think, yeah.
JM: Right, so um, you mentioned, when we weren’t recording there, about your great interest in golf, when did you start playing golf?