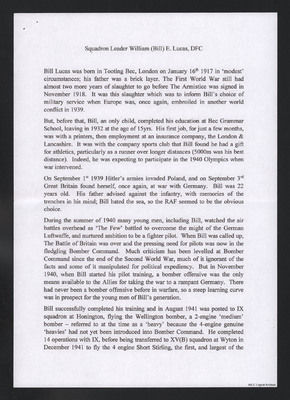 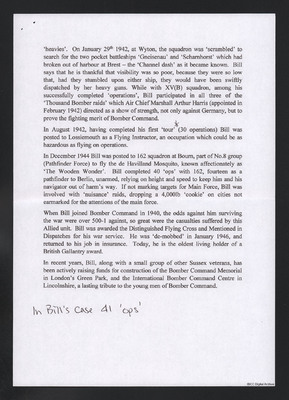 A little about his pre service life and his time on 9, 15 and 162 Squadrons. It mentions his interest in the Green Park Bomber Command Memorial and the IBCC.

Squadron Leader William (Bill) E. Lucas, DFC
Bill Lucas was born in Tooting Bee, London on January 16th 1917 in 'modest'
circumstances; his father was a brick layer. The First World War still had
almost two more years of slaughter to go before The Armistice was signed in
November 1918. It was this slaughter which was to inform Bill's choice of
military service when Europe was, once again, embroiled in another world
conflict in 1939.
But, before that, Bill, an only child, completed his education at Bee Grammar
School, leaving in 1932 at the age of 1Syrs. His first job, for just a few months,
was with a printers, then employment at an insurance company, the London &
Lancashire. It was with the company sports club that Bill found he had a gift
for athletics, particularly as a runner over longer distances (5OOOm was his best
distance). Indeed, he was expecting to participate in the 1940 Olympics when
war intervened.
On September 1st 1939 Hitler's armies invaded Poland, and on September 3rd
Great Britain found herself, once again, at war with Germany. Bill was 22
years old. His father advised against the infantry, with memories of the
trenches in his mind; Bill hated the sea, so the RAF seemed to be the obvious
choice.
During the summer of 1940 many young men, including Bill, watched the air
battles overhead as 'The Few' battled to overcome the might of the German
Luftwaffe, and nurtured ambition to be a fighter pilot. When Bill was called up,
The Battle of Britain was over and the pressing need for pilots was now in the
fledgling Bomber Command. Much criticism has been levelled at Bomber
Command since the end of the Second World War, much of it ignorant of the
facts and some of it manipulated for political expediency. But in November
1940, when Bill started his pilot training, a bomber offensive was the only
means available to the Allies for taking the war to a rampant Germany. There
had never been a bomber offensive before in warfare, so a steep learning curve
was in prospect for the young men of Bill's generation.
Bill successfully completed his training and in August 1941 was posted to IX
squadron at Honington, flying the Wellington bomber, a 2-engine 'medium'
bomber - referred to at the time as a 'heavy' because the 4-engine genuine
'heavies' had not yet been introduced into Bomber Command. He completed
14 operations with IX, before being transferred to XV(B) squadron at Wyton in
December 1941 to fly the 4 engine Short Stirling, the first, and largest of the
'heavies'. On January 29th 1942, at Wyton, the squadron was 'scrambled' to
search for the two pocket battleships 'Gneisenau' and 'Scharnhorst' which had
broken out of harbour at Brest - the 'Channel dash' as it became known. Bill
says that he is thankful that visibility was so poor, because they were so low
that, had they stumbled upon either ship, they would have been swiftly
dispatched by her heavy guns. While with XV(B) squadron, among his
successfully completed 'operations' , Bill participated in all three of the
'Thousand Bomber raids' which Air Chief Marshall Arthur Harris (appointed in
February 1942) directed as a show of strength, not only against Germany, but to
prove the fighting merit of Bomber Command.

In August 1942, having completed his first 'tour' (30 operations) Bill was
posted to Lossiemouth as a Flying Instructor, an occupation which could be as
hazardous as flying on operations.
In December 1944 Bill was posted to 162 squadron at Bourn, part ofNo.8 group
(Pathfinder Force) to fly the de Havilland Mosquito, known affectionately as
'The Wooden Wonder'. Bill completed 40 'ops' with 162, fourteen as a
pathfinder to Berlin, unarmed, relying on height and speed to keep him and his
navigator out of harm's way. If not marking targets for Main Force, Bill was
involved with 'nuisance' raids, dropping a 4,000lb 'cookie' on cities not
earmarked for the attentions of the main force.
When Bill joined Bomber Command in 1940, the odds against him surviving
the war were over 500-1 against, so great were the casualties suffered by this
Allied unit. Bill was awarded the Distinguished Flying Cross and Mentioned in
Dispatches for his war service. He was 'de-mobbed' in January 1946, and
returned to his job in insurance. Today, he is the oldest living holder of a
British Gallantry award.
In recent years, Bill, along with a small group of other Sussex veterans, has
been actively raising funds for construction of the Bomber Command Memorial
in London's Green Park, and the International Bomber Command Centre in
Lincolnshire, a lasting tribute to the young men of Bomber Command.