Letter to Wally Layne's wife from the Air Ministry 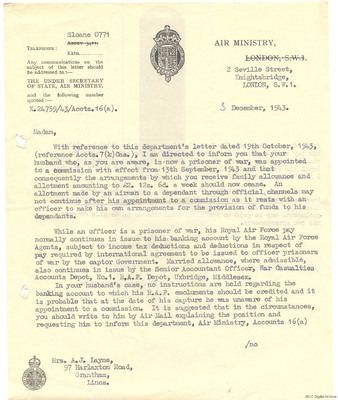 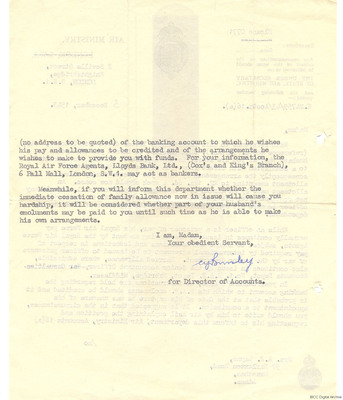 Letter to Wally Layne's wife from the Air Ministry

Informs her that her husband now a prisoner of war was appointed to a commission and goes on to explain resulting financial matters. Writes that as an officer he needs a bank account and suggests how they go about arranging this.

With reference to this department’s letter dated 19th October, 1943, (reference Accts.7(k)Cas.), I am directed to inform you that your husband who, as you are aware, is now a prisoner of war, was appointed to a commission with effect from 13th September, 1943 and that consequently the arrangements by which you receive family allowance and allotment amounting to £2. 12s. 6d. a week should now cease. An allotment made by an airman to a dependant through official channels may not continue after his appointment to a commission as it rests with an officer to make his own arrangement for the provision of funds to his dependants.

While an officer is a prisoner of war, his Royal Air Force pay normally continues in issue to his banking account by the Royal Air Force Agents, subject to income tax deductions and deductions in respect of pay required by international agreement to be issued to officer prisoners of war by the captor Government. Married allowance, where admissible, also continues in issue by the Senior Accountant Officer, War Causalities Accounts Depot, No.1. R.A.F. Depot, Uxbridge, Middlesex.

In your husband’s case, no instructions are held regarding the banking account to which his R.A.F. emoluments should be credited and it is probable that at the date of his capture he was unaware of his appointment to a commission. It is suggested that in the circumstances, you should write to him by Air Mail explaining the position and requesting him to inform this department, Air Ministry, Accounts 16 (a)

(no address to be quoted) of the banking account to which he wishes to pay and allowances to be credited and of the arrangements he wishes to make to provide you with funds. For your information, the Royal Air Force Agents, Lloyds Bank, Ltd., (Cox’s and King’s Branch), 6 Pall Mall, London, S.W.1. may act as bankers.

Meanwhile, if you will inform this department whether the immediate cessation of family allowance now in issue will cause you hardship, it will be considered whether part of your husband’s emoluments may be paid to you until such time as he is able to make his own arrangements.

I am, Madam,
Your obedient Servant,
[Signature]
for Director of Accounts.