100 items. The collection concerns Walter 'Wally' Layne (b. 1916, 963012, 40348 Royal Air Force) and contains his log book, prisoner of war diary, personal and official correspondence and photographs. He flew operations as a wireless operator with 97 Squadron and became a prisoner of war after being shot down.

The collection has been donated to the IBCC Digital Archive by D Layne and catalogued by Nigel Huckins.

Starts with a letter to him after she finds out he is a prisoner telling how she felt when he was missing and how happy she was with the news that he was a prisoner. After a day by day diary of her feelings, activities, news of friends and… 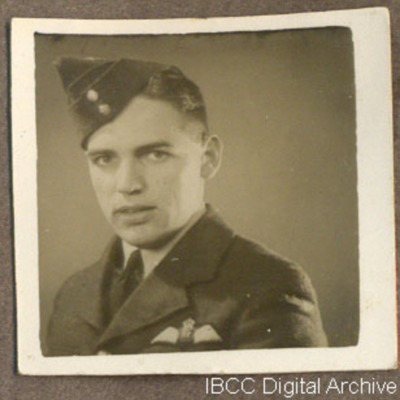 Head and shoulders portrait of an airman wearing uniform tunic with pilot's brevet and side cap. Submitted with caption 'Vic Wilson, Like Twilley and Campling, Victor Wilson was a Grantham boy. He was lost at an OTU in Scotland'. 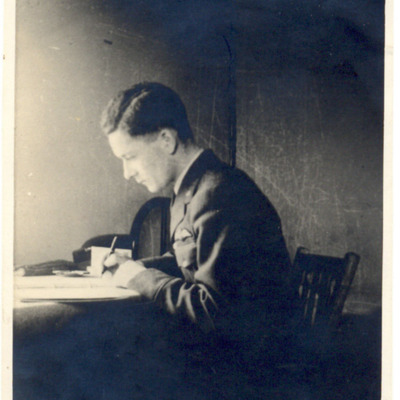 Half length portrait of an RAF officer wearing uniform tunic with pilot's brevet sitting at a desk writing. Submitted with the caption 'Twilly '. 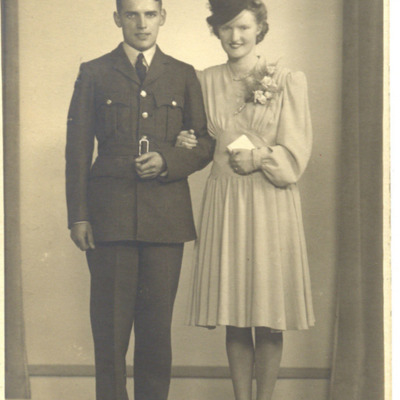 Full length portrait of a man and woman. man on the left wears uniform tunic and the woman on the right a dress and hat. Submitted with caption 'Shirley and Vic'.

An airman in front of wooden huts 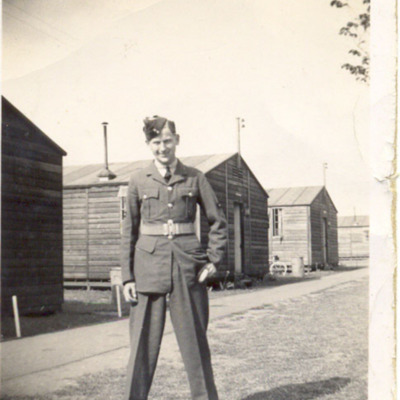 Full length portrait of an airman wearing uniform tunic and side cap standing on grass with a pathway and four wooden huts behind. Submitted with caption 'Dick Campling, Campling on left was best man to my Uncle Charles Andrewartha. My mother on… 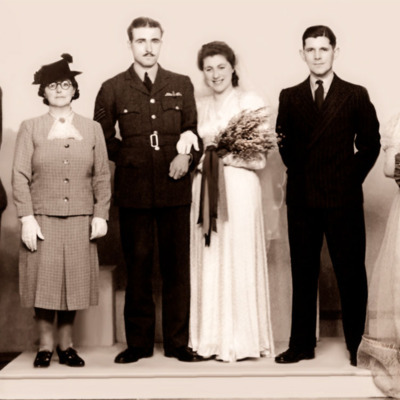 Three men and three women standing in line. Two men are wearing RAF uniform tunic with pilot's brevet, The woman in the middle wearing wedding dress and the man next to her a civilian suit. 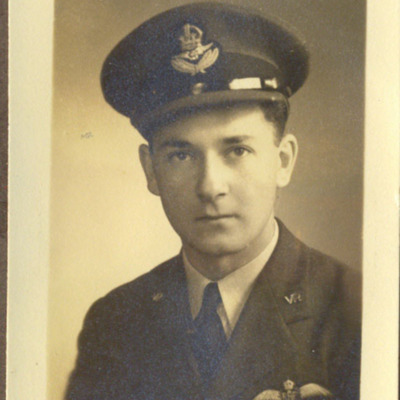 Head and shoulders portrait of n RAF officer wearing uniform tunic with pilot's brevet and peaked cap. Submitted with the caption 'Bernard Twilley, From my mother’s photograph album. Bernard was a Grantham boy and a friend of my parents. You… Thirty-five airmen wearing greatcoats and side or peaked caps sitting and standing in four rows.

Submitted with caption 'Back row left to right. Edward Pullen, became a Wing Commander, killed in action 20 December 1943 when serving with 50… 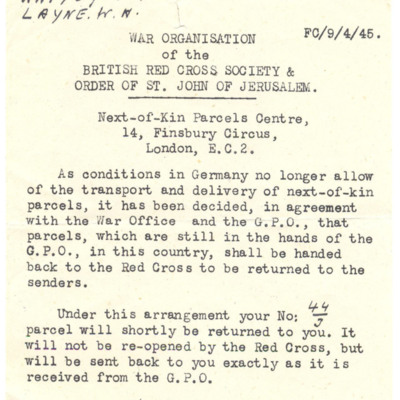 Due to conditions in Germany no longer allow transport and delivery of next of kin parcels, those still in hands of GPO would be handed back to Red Cross and returned to sender. 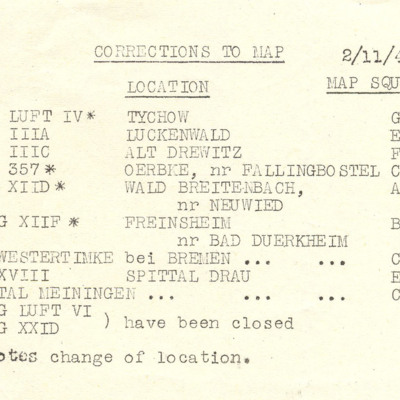 Table with names of prisoner of war camps, location and map square. 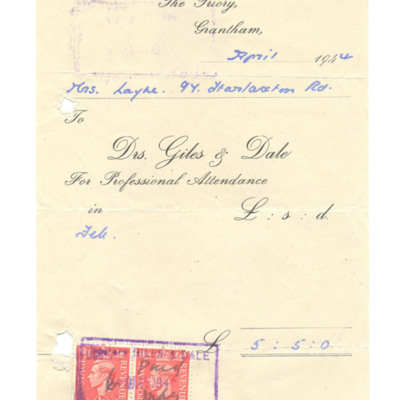 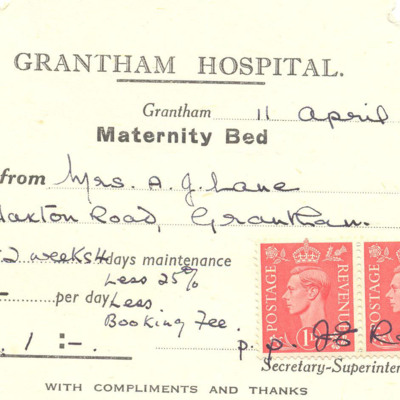 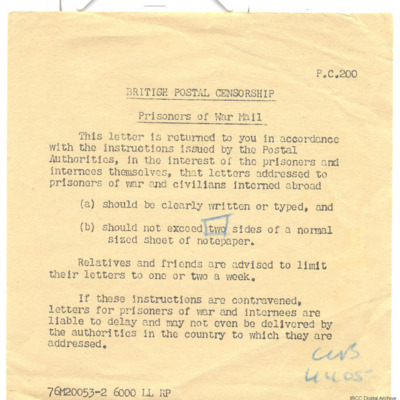 Notes that letter was returned and gives reasons that they should not exceed two sides of normal sized paper. 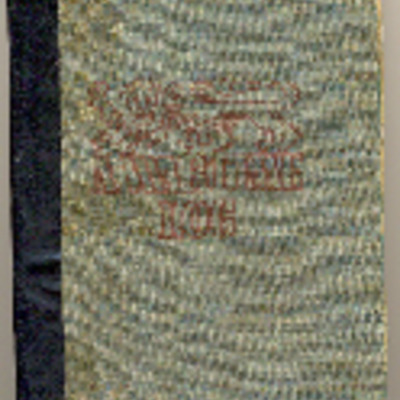 Observer’s and air gunner’s flying log book for Walter Henry lane, wireless operator/air gunner, covering the period from 19 October 1940 to 23 September 1943, when he was shot down and became a prisoner of war. He was stationed at RAF Penrhos,… 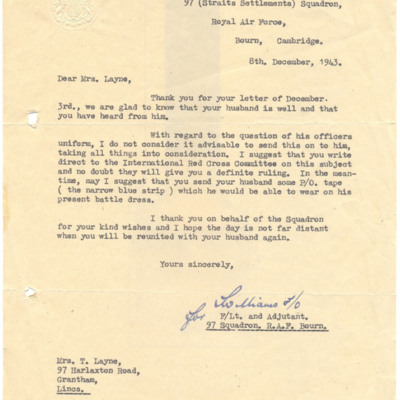 Suggest that she does not send officers uniform to him direct but should write to the international Red Cross committee to get a definite ruling. 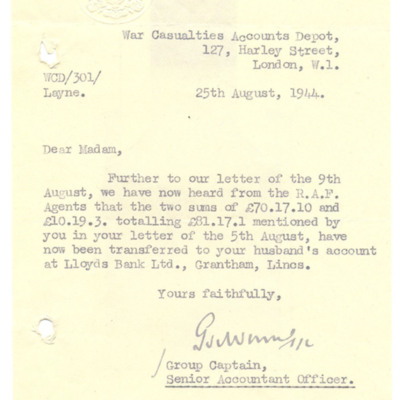 Notifies her of transfer of funds to her husbands account at Lloyds Bank Grantham. 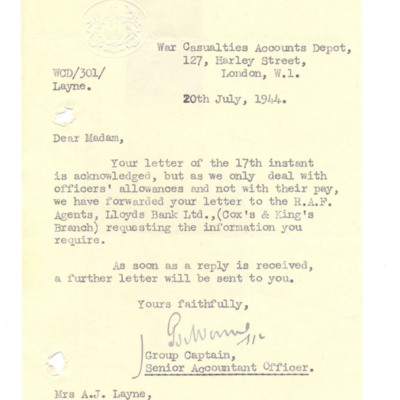 Notes that as they only dealt with officers' allowances not pay. Her enquiry had been passed to the RAF Agents - Lloyds Bank (Cox's & King's Branch). 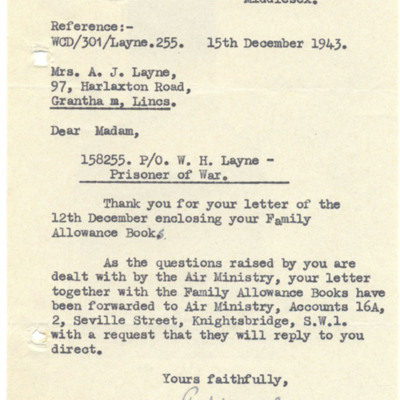 Thanks her for letter and returning family allowance book and informs her that the questions raised in her letter have been forwarded to the Air Ministry as they would be dealing with the matter. 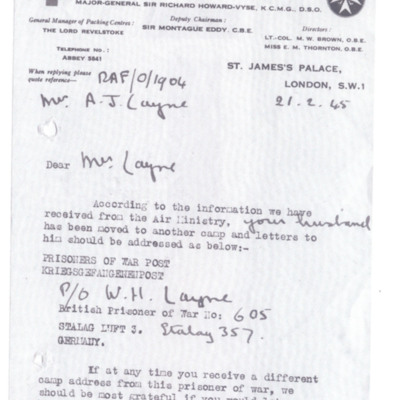 Informs her that her husband had been moved to another camp and she should sent mail to Stalag Luft 3 Stalag 357. 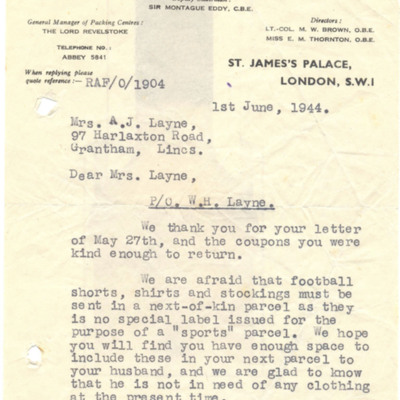 From Red Cross prisoner of war department. Explains that football items of clothing must be sent in next of kin parcel as there was no special label for a sports parcel. 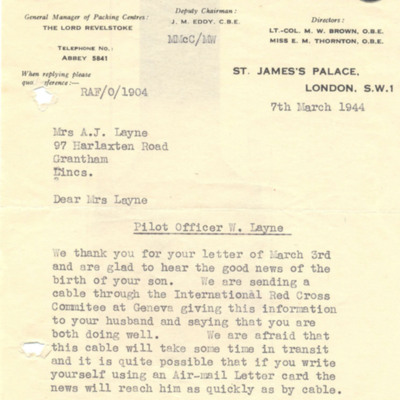 From Red Cross prisoner of war department congratulating her on birth of her son and that they would cable through Geneva giving information about the birth to her husband. 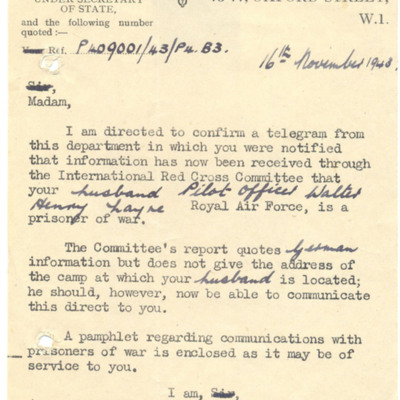 Informs her that information had been received through the Red Cross that her her husband was a prisoner of war. 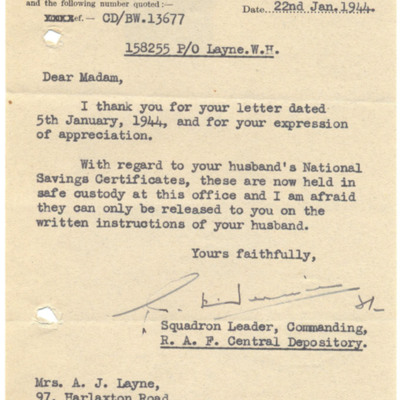 Notes her husbands national saving certificates were held in safe custody at their office and could only be released to her on written instructions of her husband. Confirms that her husband was promoted to warrant officer with effect from 1 August 1943.
View all 100 items