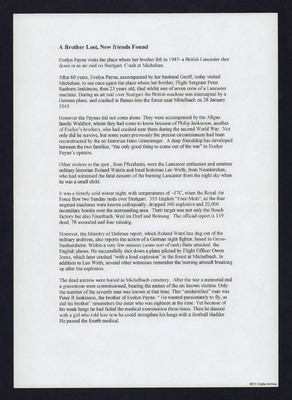 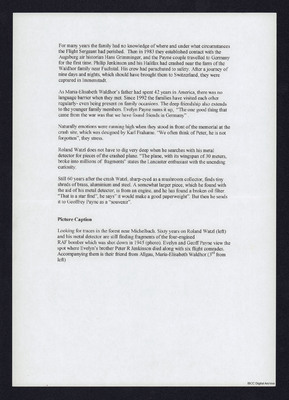 Account of Evelyn Payne (sister to Philip and Peter Jenkinson visiting Germany to see the place where her brother Flight Sergeant Peter Jenkinson's Lancaster was intercepted and crashed. Describes visit and being joined by German acquaintances and amateur historian. Describes operation to Stuttgart, attach by German night fighter and burial of crew. Gives history of other attendees.

Evelyn Payne visits the place where her brother fell in 1945 - a British Lancaster shot down in an air raid on Stuttgart. Crash at Michelsee.

After 60 years, Evelyn Payne, accompanied by her husband Geoff, today visited Michelsee, to see once again the place where her brother, Flight Sergeant Peter Raeburn Jenkinson, then 23 years old, died whilst one of seven crew of a Lancaster machine. During an air raid over Stuttgart the British machine was intercepted by a German plane, and crashed in flames into the forest near Mittelbach on 28 January 1945.

However the Paynes did not come alone. They were accompanied by the Allgau family Waldhor, whom they had come to know because of Philip Jenkinson, another of Evelyn’s brothers, who had crashed near them during the second World War. Not only did he survive, but some years previously the precise circumstances had been reconstructed by the air historian Hans Grimminger. A deep friendship has developed between the two families, “the only good thing to come out of the war” in Evelyn Payne’s opinion.

Other visitors to the spot, from Pforzheim, were the Lancaster enthusiast and amateur military historian Roland Watzln and local historian Leo Wirth, from Neunkirchen, who had witnessed the fatal descent of the burning Lancaster from the night sky when he was a small child.

It was a bitterly cold winter night, with temperatures of -17C, when the Royal Air Force flew two Sunday raids over Stuttgart. 353 English :Four-Mots”’ as the four engined machines were known colloquially, dropped 300 explosive and 20,000 incendiary bombs over the surrounding area. Their target was not only the Bosch factory but also Feuerbach, Weil I’m Dorf and Botnang. The official report is 119 dead, 78 wounded and four missing.

However, the Ministry of Defence report, which Roland Watzl has dug out of the military archives, also reports the action of a German night fighter, based in Gross Sachsenheim. Within a very few minutes (some sort of rank) Bahr attacked the English planes. He successfully shot down a plane piloted by Flight Officer Owen Jones, which later crashed “with a loud explosion” in the forest at Michelbach. In addition to Leo Wirth, several other witnesses remember the burning aircraft breaking up after the explosion.

The dead aircrew were buried in Michelbach cemetery. After the war a memorial and a gravestone were commissioned, bearing the names of the six known victims. Only the number of the seventh man was known at that time. This “unidentified” man was Peter R Jenkinson, the brother of Evelyn Payne. “He wanted passionately to fly, as did his brother” remembers the sister who was eighteen at the time. Yet because of his weak lungs he had failed the medical examination three times. Then he danced with a girl who told him how he could strengthen his lungs with a football bladder. He passed the fourth medical.

For many years the family had no knowledge of where and under what circumstances the Flight Sergeant had perished. Then in 1983 they established contact with the Augsberg air historian Hans Grimminger, and the Payne couple travelled to Germany for the first time. Philip Jenkinson and his Halifax had crashed near the farm of the Waldhor family near Fuchstal. His crew had parachuted to safety. After a journey of nine days and nights, which should have brought them to Switzerland, they were captured in Immenstadt.

As Mria-Elisabeth Waldhor’s father had spent 42 years in America, there was no language barrier when they met. Since 1992 the families have visited each other regularly - even being present on family occasions. The dee friendship also extends to the younger family members. Evelyn Payne sums it up, “The one good thing that came from the war was that we have found friends in Germany”.

Naturally emotions were running high when they stood in front of the memorial at the crash site, which was designed by Karl Frahame. “We often think of Peter, he is not forgotten”, they stress.

Roland Watzl does not have to dig very deep when he searches with his metal detector for pieces of the crashed plane. “The plane, with its wingspan of 30 meters, broke into millions of fragments” states the Lancaster enthusiast with the unending curiosity.

Still 60 years after the crash Watzl, sharp-eyed as a mushroom collector, finds tiny shreds of brass, aluminium and steel. A somewhat larger piece, which he found with the aid of his metal detector, is from an engine, and he has found a broken oil filter. “That is a star find”, he says “it would make a good paperweight”. But then he sends it to Geoffrey Payne as a “souvenir”.

Looking for traces in the forest near Michelbach. Sixty years on Roland Watzl (left) and his metal detector are still finding fragments of the four-engined RAF bomber which was shot down in 1945 (photo). Evelyn and Geoff Payne view the spot where Evelyn’s brother Peter R Jenkinson died along with six flight comrades. Accompanying them is their friend from Allgau, Maria-Elisabeth Waldhor (3rd from left)