56 items concerning Leslie Philip Jenkinson who served as a mid-upper gunner on 10 Squadron Halifax and was shot down on 6 September 1943 and taken prisoner. Collection contains documents, research, memoirs, maps, correspondence and photographs. 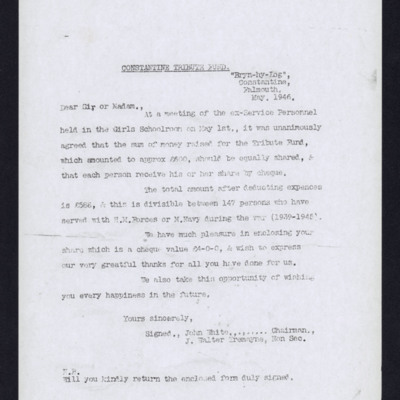 Notes that fund was to be shared between 147 people who served with H M forces. Encloses cheque for £4.0.0 for addressee share.

Translation of German articles that appeared in German newspapers 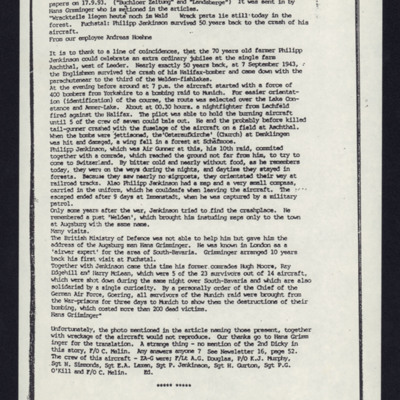 Translation of two articles about Philip Jenkinson aircraft being shot down and after the war trying to find the location of the crash. Notes that he was amongst party of prisoners of war taken to view damage by bombing in Munich. Annotated 'From 10… 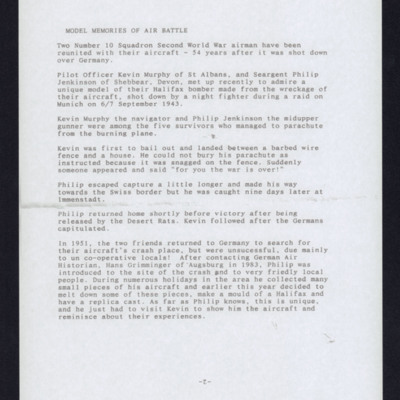 Account of two 10 Squadron airmen being reunited with their aircraft after 54 years. Kevin Murphy and Philip Jenkinson met to admire a model of their Halifax made from wreckage of their aircraft. Gives account of their bail out and evading. Notes…

Philip Jenkinson's journey in Germany after being shot down 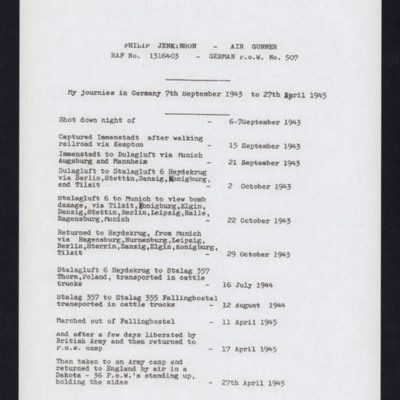 Gives itinerary of journey from being shot down, captured, and various prisoner of war camps (Dulag Luft, Stalag Luft 6, Stalag 357 and 355) and eventual repatriation. 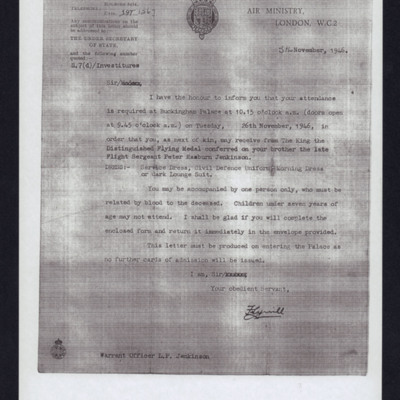 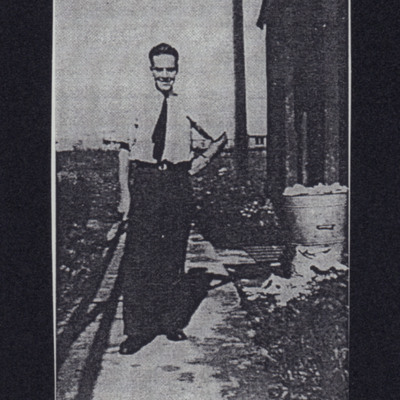 Full length image of a man in shirt and tie standing on a path in a garden. To the right part of a building. Captioned 'Just after coming home from POW camp'. 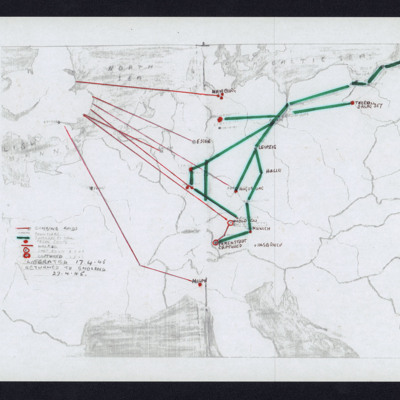 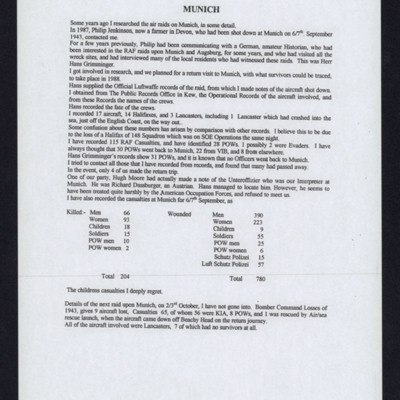 Details of research into air attacks on Munich including contact with Philip Jenkinson whose aircraft was shot down on the operation and German amateur historian. Noted number of aircraft lost, casualties RAF and German, prisoners of war. Both for… 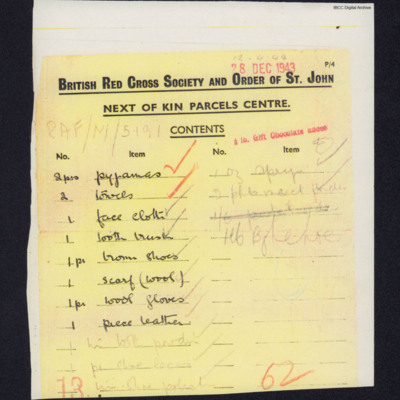 Eight aircrew in front of a Halifax 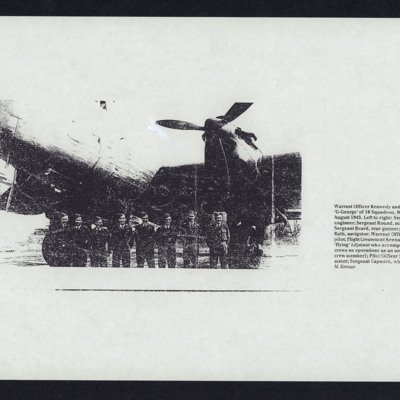 Copy of photograph of eight aircrew all wearing battledress and side caps standing in line in front of a Halifax. Text alongside states 'Warrant Officer Kennedy with the crew of JD166 "G-George" of 10 Squadron, Melborne, August 1943'. Then provides… 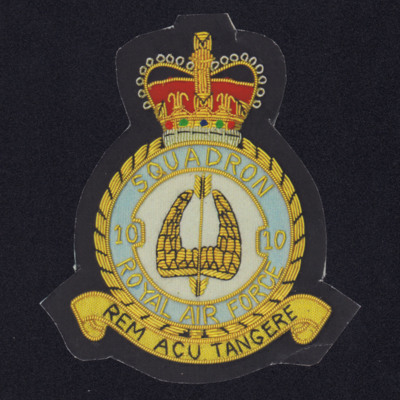 Correspondence with prisoners of war 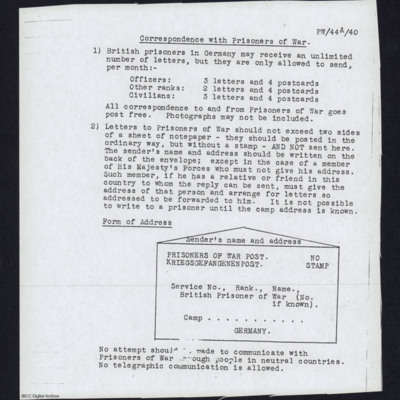 Gives instructions on numbers of letters allowed , number of pages, how to post, return address, lay out of envelope. No communication through neutral countries or telegraphic communication allowed.

Letter to all prisoners of war 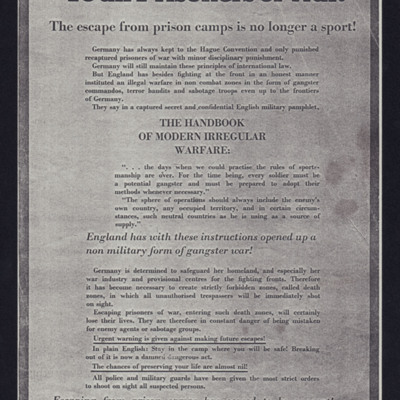 Letter stating that escaping is no longer a sport. Accuses England of opening a non military form of gangster war due to information found in captured English military pamphlet on irregular warfare. States shoot on sight orders. 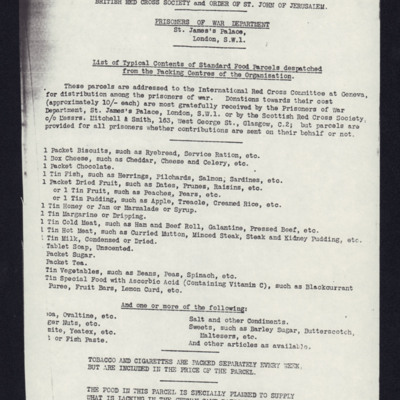 List of food items. Gives account of how distributed, donations gratefully received, but parcels are provided for all prisoners whether contributions sent or not.

Prisoners of war - some questions answered Instructions about sending food parcels. How, food, what could be sent, costs, donations, addressing. Concludes with reasons why parcels not addressed to individual prisoners. 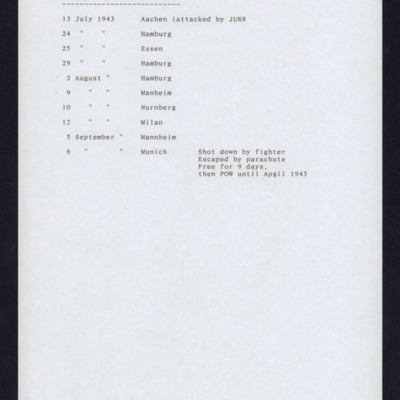 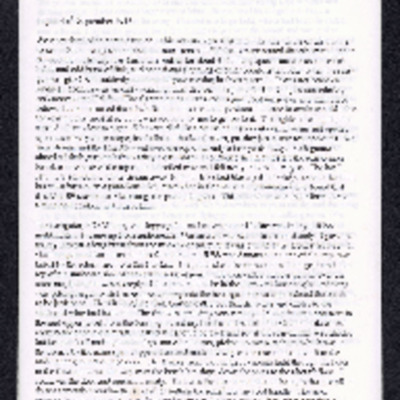 Recounts details of operation and being attacked by Me 109s which were driven off and then by a Ju 88 which set them on fire. Bombs jettisoned and he baled out. Continues with account of evading and attempt to reach Switzerland. Describes capture and…

Article on destruction of a church 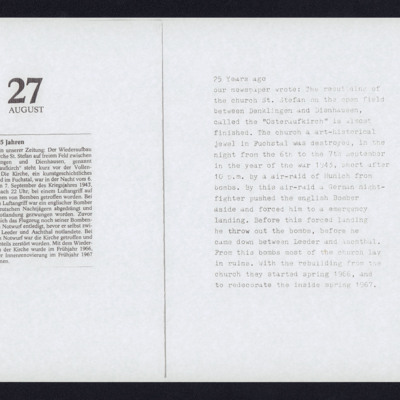 Copy of a German article with translation on next page about the destruction of church St Stefan between Denklingen and Dienhausen. Account of bomber on operation to Munich being shot down by fighter and jettisoning bombs before crashing. 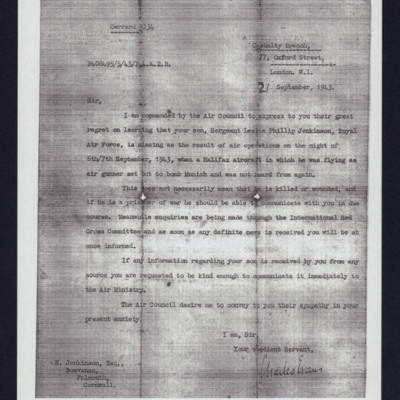 Expresses regret that his son was reported as missing in action as result of operations 6/7 September 1943 to Munich. 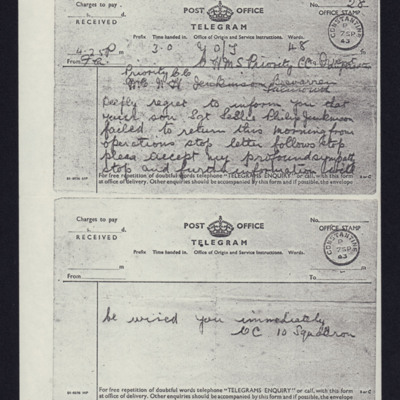 Informs them that their son failed to return from operations. 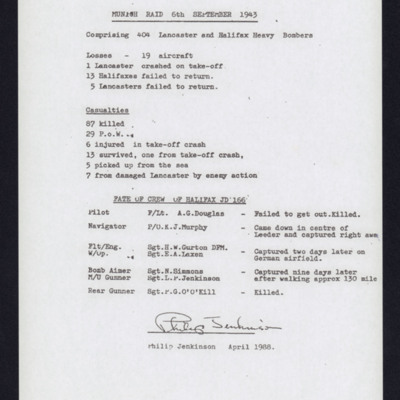 Lists losses, casualties and the fate of his Halifax crew. 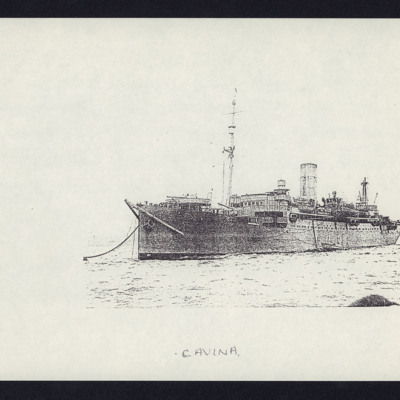 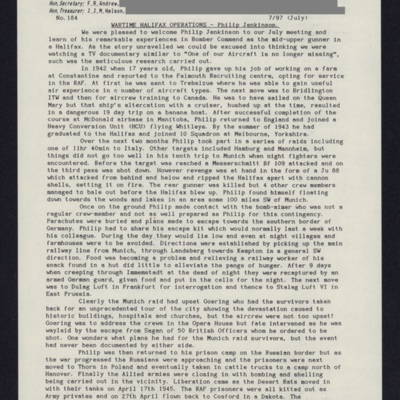 Written for Cornish aviation society. Welcomes Philip Jenkinson and gives account of his training and operations on 10 Squadron Halifax. Describes being shot down and baling out. Mentions evading, capture and as a prisoner being on a tour of his… 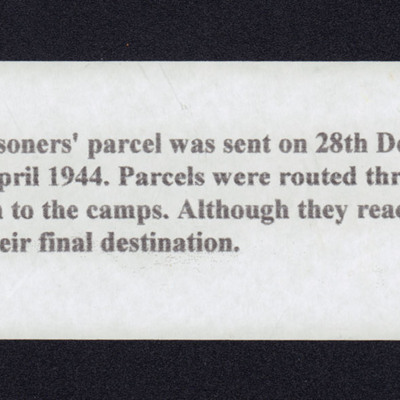 States parcel sent on 28 December 1943 did not arrive until 12 April 1944. Routed through Portugal and many never arrived.

Map of part of Germany 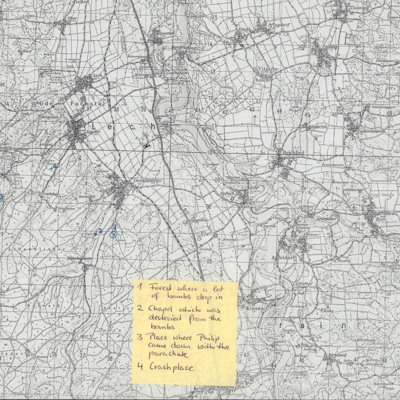 Copy of map with several small villages. Marked with numbered crosses. Annotated '1 Forest where a lot of bombs dropped, 2 Chapel which was destroid [sic] form bombs, 3 place where Philip came down with the parachute, 4 Crash place'.
View all 56 items