Stirling QS-Y of No 620 Squadron on -Day 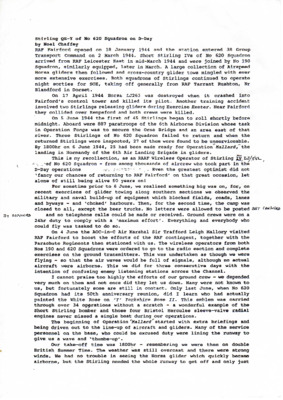 Stirling QS-Y of No 620 Squadron on -Day

Describes opening of RAF Fairford as part of 38 Group and arrival of Stirlings of 620 and 190 Squadons. Mentions training accident of Horsa glider. Goes on to describe 620 Squadrons operations paratrooper drops on D-Day and events leading up to the day. Praises groundcrew and gives detailed account of operation including the parting of their Horsa tow which had then to land in the sea. List his crew. Author was RAF wireless operator.

Stirling QS-Y of No 620 Squadron on D-Day
by Noel Chaffey
RAF Fairford opened on 18 January 1944 and the station entered 38 Group Transport Command on 2 March 1944. Short Stirling IVs of No 620 Squadron arrived from RAF Leicester East in mid-March 1944 and were joined by No 190 Squadron, similarly equipped, later in March. A large collection of Airspeed Horsa gliders then followed and cross-country glider tows mingled with ever more extensive exercises. Both squadrons of Stirlings continued to operate night sorties for SOE, taking off generally from RAF Tarrant Rushton, Nr Blandford in Dorset.

On 17 April 1944 Horsa LJ263 was destroyed when it crashed into Fairford's control tower and killed its pilot. Another training accident involved two Stirlings releasing gliders during Exercise Exeter. Near Fairford they collided over Kempsford and both crews were killed.

On 5 June 1944 the first of 45 Stirlings began to roll shortly before midnight. Aboard were 887 paratroops of the 6th Airborne Division whose task in Operation Tonga was to secure the Orne Bridge and an area east of that river. Three Stirlings of No 620 Squadron failed to return and when the returned Stirlings were inspected, 27 of them were found to be unserviceable. By 1800hr on 6 June 1944, 25 had been made ready for Operation “Mallard,” the landing in Normandy of the 6th Air Landing Brigade in gliders.

This is my recollection, as an RAAF Wireless Operator of Stirling IV, LJ/592, of No 620 Squadron – from among thousands of aircrew who took part in the D-Day operations. Even the greatest optimist did not 'fancy our chances of returning to RAF Fairford' on that great occasion, let alone of still being alive 50 years on !

For sometime prior to 6 June, we realised something big was on, for, on recent exercises of glider towing along southern sections we observed the military and naval build-up of equipment which blocked fields, roads, lanes and byways – and 'choked' harbours. Then, for the second time, the camp was closed to all, except the beer trucks. No letters were allowed to be posted [inserted] but censored by officers [/inserted] and no telephone calls could be made or received. Ground crews were on a 24hr duty to comply with a 'maximum effort'. Everything and everybody who could fly was tasked to do so.

On 4 June the AOC-in-C Air Marshal Sir Trafford Leigh Mallory visited RAF Fairford to boost the efforts of the RAF contingent, together with the Parachute Regiments then stationed with us. The wireless operators from both Nos 190 and 620 Squadrons were ordered to go to the radio section and complete exercises on the ground transmitters. This was undertaken as though we were flying – so that the airwaves would be full of signals, although no actual aircraft were airborne. This we did for three consecutive days with the intention of confusing enemy listening stations across the Channel.

I cannot praise too highly the efforts of our ground crew – we depended very much on them and not once did they let us down. Many were not known to us, but fortunately some are still in contact. Only last June, when No 620 Squadron had its 50th anniversary reunion, did I learn who had actually painted the White Rose on 'Y' Yorkshire Rose II. This emblem was carried through over 34 operations without a scratch – a wonderful example of the Short Stirling bomber and those four Bristol Hercules sleeve-valve radial engines never missed a single beat during our operations.

The beginning of Operation “Mallard” started with extra briefings and being driven out to the line-up of aircraft and gliders. Many of the service personnel on the base, who could be excused duty were lining the runway to give us a wave and 'thumbs-up'.

Our take-off time was 1800hr – remembering we were then on double British Summer Time. The weather was still overcast and there were strong winds. We had no trouble in seeing the Horsa glider which quickly became airborne, but the Stirling needed the whole runway to get off and only just

[page break]
cleared the hedge. Although the Stirling was renowned to swing on take-off, I can never remember it happening to us. The special strength of Derek, our pilot, was always welcome and much appreciated.

Safely airborne we climbed to gain our position in the streams of similar aircraft and gliders from both Fairford and neighbouring airfields. We crossed the coast at Bournemouth and, on a special signal, turned onto our final leg for the Normandy coast. Our glider pilots – Staff Sergeant Turvey and Sgt Stanley were in the 'high tow' position. They were experiencing a roughish ride because of the turbulent air, not only from the weather but from the many four engined bombers in the stream ahead. These were at different heights and the mixing slip streams caused considerable difficulties. We were flying over what can best be described as a carpet, a patterned carped, of grey-blue with dark boats trailing white wakes. Air sea rescue launches were making diagonal patterns across the convoys.

We must have looked an impressive sight from sea level with the continuous flow of the huge Stirlings – all black on the underside interrupted by the newly painted triple white bands on the fuselage and wings, the invasion markings. The gliders had also been painted with the white stripes.

We were coming up to the French coastline, which we could barely see. Word came from our glider, via a cable plaited into the towrope, requesting permission to descend into the 'low tow' position. This was to be the best positioning for the release over the Dropping Zone (DZ). As we were soon to be near the DZ our pilot retrimmed the Stirling and gave permission for the Horsa to change position. Just then a strong gust of air swung us aside and we heard a loud bang. We shot forward and upwards with the engines screaming – the tow rope had broken.

Our Horsa had broken the rope when he came down through our slipstream, together with the down-draught of turbulent air. Having broken loose he was committed to head for the sea, about one mile off the French coast.

George Neal, another No 620 Sqn pilot two aircraft behind us noted our predicament and warned his crew to keep a sharp lookout. Basil Crocker, our navigator, quickly passed me our position and I broke radio silence to alert the air-sea rescue service. Our [inserted] flight engineer Frank [/inserted] then got the Stirling's rubber raft ready to throw out when we flew over the ditched glider.

Still floating on the rough sea we could observe five soldiers on the wing of the Horsa as we continued to circle overhead. Above us the constant stream of aircraft and gliders continued to their destination near Caen. After glider release we were to fly to their supply dropping zone, and then out as quickly as possible en route to base.

By this time, the air sea rescue launches had arrived and the five were in the life raft. But the glider began to sink and quickly went under. We still had our supplies to drop so we climbed back up to a lower position in the oncoming stream – this time mostly Dakotas towing Waco Hadrian gliders. We also observed increasing activity of enemy AA fire and could not help wondering why so many of the smaller aircraft were being hit and damaged – whilst we, in the larger four-engined bombers, at a lower altitude were just flying through the enemy fire.

The DZ was clearly visible and our bomb aimer gave us a slight alteration to course, straight in over the field. With a quick trip of the switch the 24 containers were released. With a lower weight the Stirling had increased burst of speed and we quickly headed back to the coast. After returning over the Channel, Bognor Regis was our allotted crossing point and then direct home to Fairford.

When we arrived at base we were 'stacked' up for a considerable time whilst wounded and damaged aircraft had preference for landing. By the time it was our turn to land, we had been airborne for 4 1/2 hours.

On landing we quickly inspected the Stirling to ascertain any damage – we had not sustained a single scratch ! Into the trucks back to SHQ as our

dispersal was the furthest away from all the buildings. There was a special de-briefing that day. No enemy aircraft had been sighted – nor had we seen any Allied fighter aircraft. We gave details of our gliders plunge and Derek went to the office to ascertain the fate of its crew. We soon learnt that the five army lads were back in Portsmouth, but with regret heard that both the pilot and co-pilot had been killed on impact with the water.

After our meal we returned to our hut, only to discover that two Stirling crews had not returned. The MPs were already packing up their belongings. This was a scene repeated in many huts, on many squadrons that had taken part in the D-Day Overlord operation. This was the price that had to be for that success.