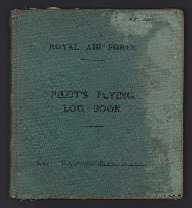 Pilots flying log book for G H Dryhurst, covering the period from 29 August 1941 to 27 August 1942, when he was shot down and became a prisoner of war and from 20 July 1945. He was stationed at RAF Peterborough (17 EFTS), RAF Cranwell (RAF College FTS), RAF Wing and Cheddington (26 OTU), RAF Elsham Wolds (103 Squadron), RAF Driffield (10 ANS), and RAF Topcliffe (1 ANS). Aircraft flown in were Tiger Moth, Oxford, Wellington, Halifax, Lancaster and Anson. He flew a total of 5 operations with 103 squadron. Targets were Essen, Duisburg, Hamburg, Kassel, and Nuremberg.