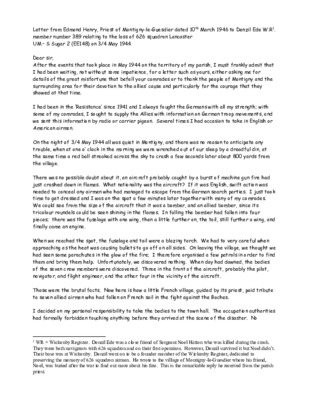 The letter refers to the crash of Lancaster EE148 in May 1944. The priest was in the Resistance and organised the collection of the bodies of the airmen and their funeral.

Letter from Edmond Henry, Priest of Montigny-Ie-Guesdier dated 10th March 1946 to Denzil Ede W.Rl.
member number 389 relating to the loss of 626 squadron Lancaster UM - S Sugar 2 (EE148) on 3/4 May 1944
Dear sir,
After the events that took place in May 1944 on the territory of my parish, I must frankly admit that
I had been waiting, not without some impatience, for a letter such as yours, either asking me for
details of the great misfortune that befell your comrades or to thank the people of Montigny and the
surrounding area for their devotion to the allies' cause and particularly for the courage that they
showed at that time.
I had been in the 'Resistance' since 1941 and I always fought the Germans with all my strength; with
some of my comrades, I sought to supply the Allies with information on German troop movements, and we sent this information by radio or carrier pigeon. Several times I had occasion to take in English or American airmen.
On the night of 3/4 May 1944 all was quiet in Montigny, and there was no reason to anticipate any
trouble, when at one 0' clock in the morning we were wrenched out of our sleep by a dreadful din, at the same time a red ball streaked across the sky to crash a few seconds later about 800 yards from the village.
There was no possible doubt about it, an aircraft probably caught by a burst of machine gun fire had
just crashed down in flames. What nationality was the aircraft? If it was English, swift action was
needed to conceal any airmen who had managed to escape from the German search parties. I just took time to get dressed and I was on the spot a few minutes later together with many of my comrades. We could see from the size of the aircraft that it was a bomber, and an allied bomber, since its tricolour rounders could be seen shining in the flames. In falling the bomber had fallen into four pieces; there was the fuselage with one wing, then a little further on, the tail, still further a wing, and finally came an engine.
When we reached the spot, the fuselage and tail were a blazing torch. We had to very careful when
approaching as the heat was causing bullets to go off on all sides. On leaving the Village, we thought we had seen some parachutes in the glow of the fire; I therefore organised a few patrols in order to find them and bring them help. Unfortunately, we discovered nothing. When day had dawned, the bodies of the seven crew members were discovered. Three in the front of the aircraft, probably the pilot, navigator, and flight engineer, and the other four in the vicinity of the aircraft.
Those were the brutal facts. Now here is how a little French village, guided by its priest, paid tribute
to seven allied airmen who had fallen on French soil in the fight against the Boches.
I decided on my personal responsibility to take the bodies to the town hall. The occupation authorities had formally forbidden touching anything before they arrived at the scene of the disaster. No
1WR = Wickenby Register. Denzil Ede was a close friend of Sergeant Noel Hatton who was killed during the crash. They were both navigators with 626 squadron and on their first operation. However, Denzil survived it but Noel didn't. Their base was at Wickenby. Denzil went on to be a founder member of the Wickenby Register, dedicated to preserving the memory of 626 squadron airmen. He wrote to the village of Montigny-le-Guesdier where his friend, Noel, was buried after the war to find out more about his fate. This is the remarkable reply he received from the parish priest.


[page break]
matter, I listened only to my own conscience and patriotism and detailed one of mycomrades, a farmer, to go and find a car, in which the bodies were carried to the town hall.
Then I informed the mayor of what had happened and of the responsibility I had assumed. To begin
with, he criticised the steps I had taken, which he considered dangerous as there might be reprisals,
but in the end he was to agree that I had done the right thing.
A burial permit had then to be obtained. It was granted for the following Saturday. As soon as I
knew this, I got out my bicycle and went off on a little propaganda trip through the region to tell
people when the burial would take place, and to get as many people as possible to come. I had ordered seven coffins, and some of the young people of Montigny had dug graves in the communal cemetery.
Montigny-Ie-Guesdier has 250 inhabitants. Well, there were more than 1000 people at the burial.
Never since I have been here had I seen so many people around. Never has the church been so full. There were people everywhere; at the doors, on the three flights of steps leading up to them, and I have never seen so many flowers in the church. What followed was even finer; it brought tears to everyone's eyes. The seven coffins were carried on the shoulders of twenty-eight young people who I had selected; they were all in, or sympathised with the Resistance.
The church was all draped in black. I had brought out the most beautiful hangings for the occasion.
One of my friends, a neighbouring priest, was at the harmonium, and the young people of the parish sang 'The Office for the Dead' whilst I presided over the service.

As we came out of the church, my comrade played 'God Save the King', the American Anthem and 'the Marseillaise' on the harmonium.
You must not forget that all this took place 4 km from Bray-sur-Seine where Gestapo agents were
permanently stationed.
All the personal items found on the dead men were collected by the British Red Cross.
That, quite simply, is the unhappy story I have undertaken to tell you.
I should be very happy for the British people to learn that it was at Montigny-Ie-Guesdier that its
airmen, killed whilst on a mission, were paid the finest homage. Indeed I am sure that in no other region did allies receive a finer burial during the Occupation.
I should be very happy to know if this information has been of use to you.
In the meantime, I remain,
Yours faithfully,
Edmond Henry,
Priest of Montigny-Ie-Guesdier,
par Bray/Seine,
Seine et Marne
France