52 items. The collection concerns Jack Marsden (1591984 Royal Air Force) and contains documents, objects and photographs. He flew operations as a flight engineer with 626 Squadron and was shot down 3/4 May 1944.

The collection has been donated to the IBCC Digital Archive by Janet Marsden and catalogued by Barry Hunter. 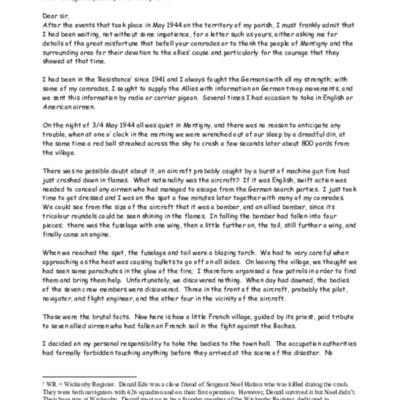 The letter refers to the crash of Lancaster EE148 in May 1944. The priest was in the Resistance and organised the collection of the bodies of the airmen and their funeral. 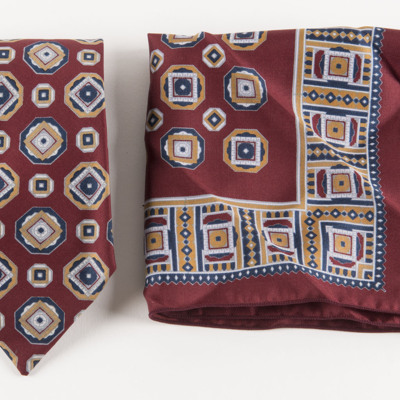 A matching maroon tie and cravat. Both have octagonals and geometric designs. 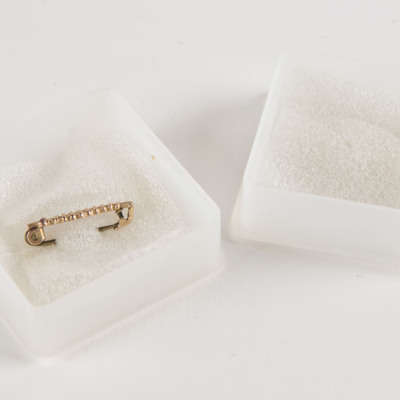 A plastic box with a metal Caterpillar Club badge. 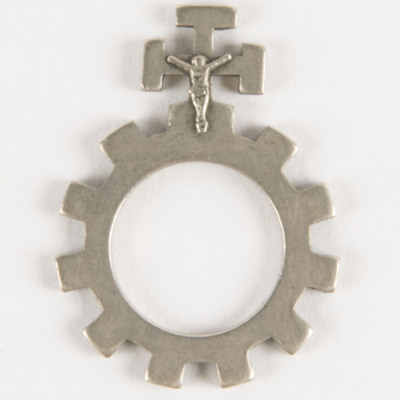 Two sides of a metal badge. On the top is a symbolised Christ on a cross. Under is a circle with 11 notches. 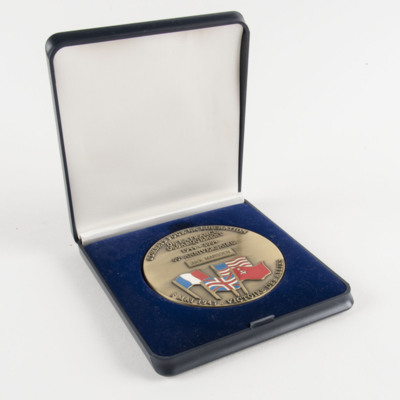 A medal with Jack's name. It commemorates the 60th anniversary of the liberation of France.
A second image has a magazine cutting with a photograph of a memorial to a Lancaster lost in 1944. 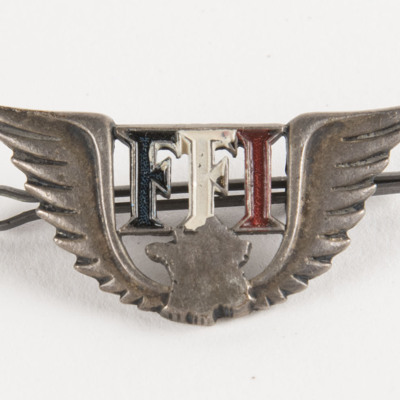 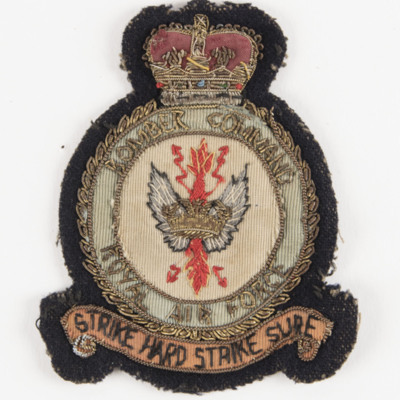 An embroidered cloth badge of the Bomber Command crest. 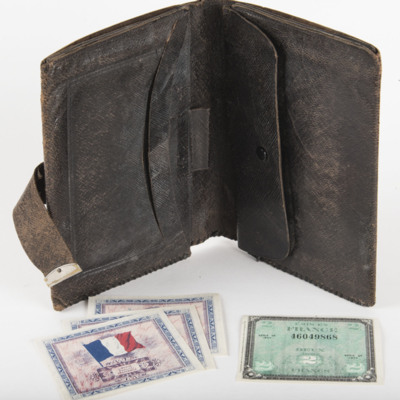 A leather wallet and four cards. Three cards have a French tricolour and the fourth card has a value of two francs. 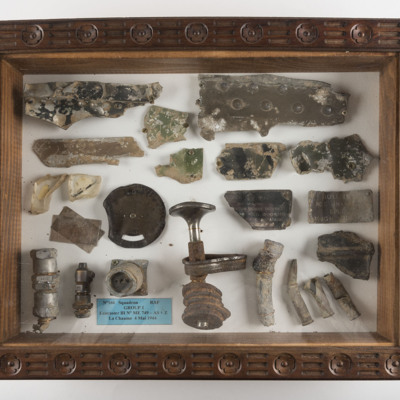 A collection of pieces recovered from the crash site of Lancaster ME 749. They are presented in a wooden case with a description 'No 166 Squadron RAF Group 1 Lancaster B1 No ME749 AS-Z La Chaume 4 Mai 1944'.
A second photograph taken from the side… 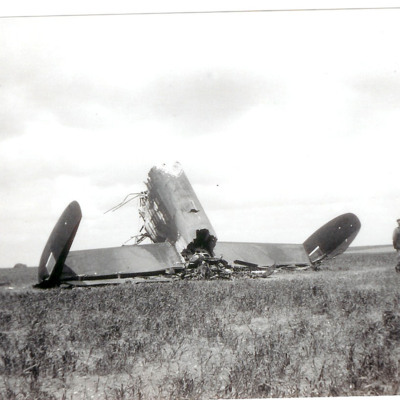 The tail of a crashed Lancaster, identified in accompanying documentation as EE148 UM-S squared. 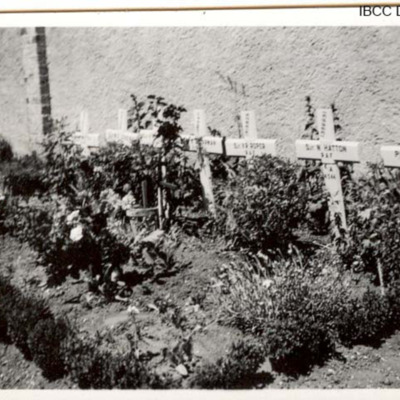 Seven graves of the crew of Lancaster EE148 UM-S squared. 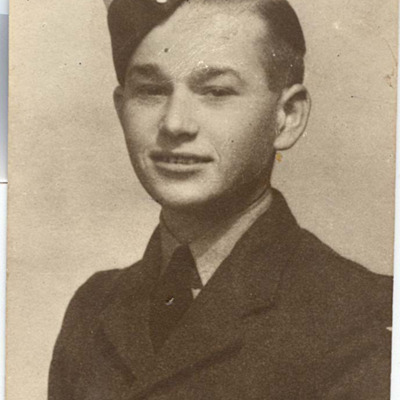 A half-length portrait of a trainee airman. 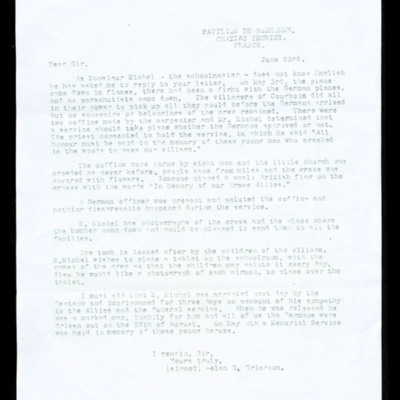 A letter referring to the crash of the Lancaster at Courboin. Two coffins were made and the airmen were buried in the graveyard with a full ceremony. 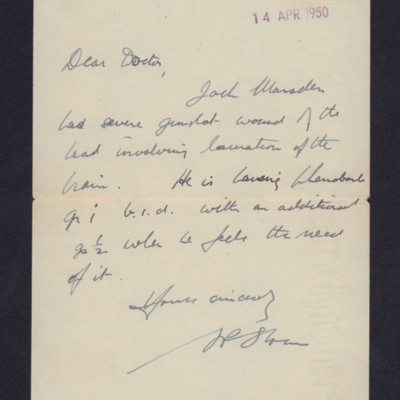 The letter advises the doctor that Jack Marsden has severe gunshot wounds to his head.

Telegram to William Marsden from his Son 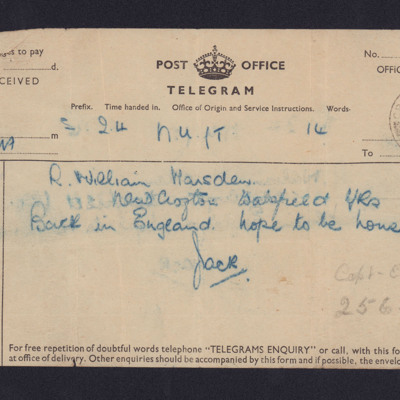 The telegram advises Jack's father that he is back in England. 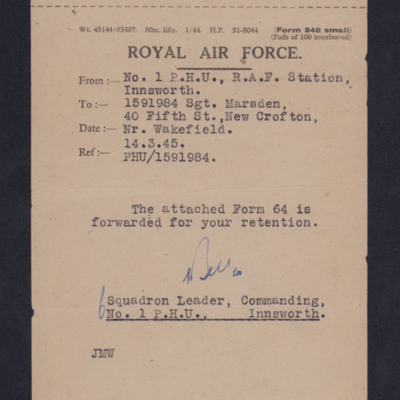 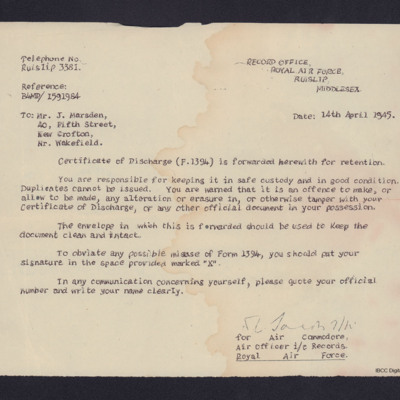 The letter includes his Certificate of Discharge and instructs Jack on how to keep it safe.

Cessation of Pay and Allowances Note 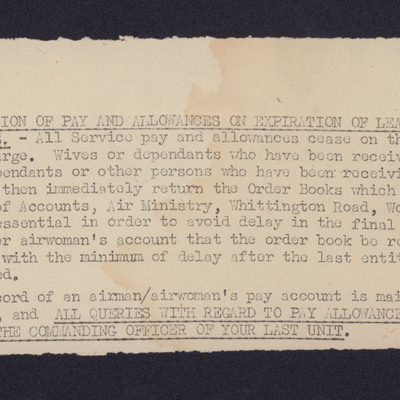 A note instructing personnel to return Order Books on their discharge. 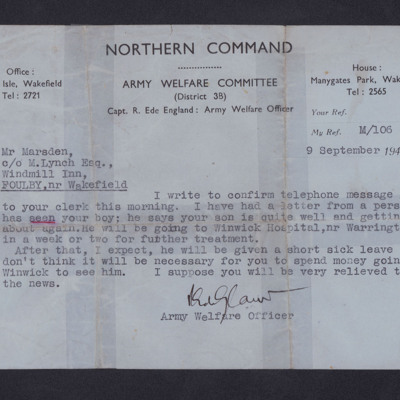 The letter advises that his son is well and 'getting about again'.

The Crew of Lancaster ME749 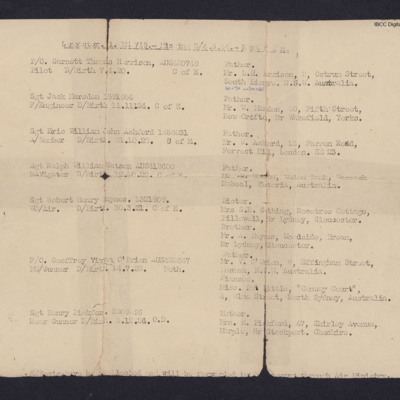 The crew of the Lancaster are named with their date of birth and next of kin. The aircraft was missing on the night of 3/4 May 1944. 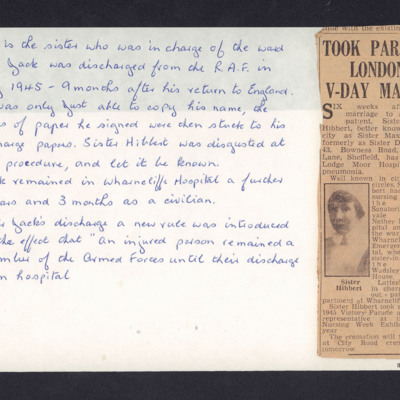 A newspaper cutting referring to the death of Sister Nellie Hibbert. There is also a handwritten note about the nurse's support for Jack and his discharge from the RAF whilst in hospital. 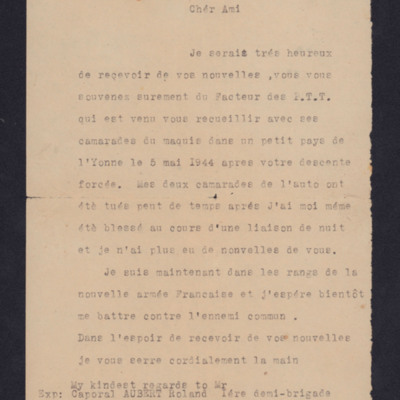 A letter in French with an English translation from a French reistance fighter. 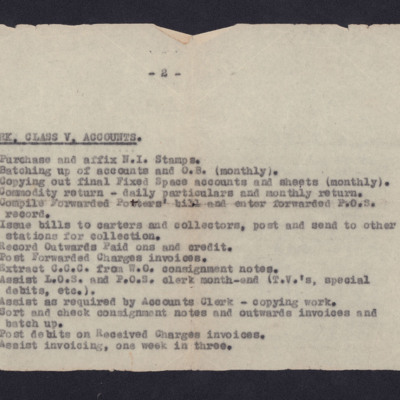 A list of jobs expected of a Clerk, Class V. Accounts. 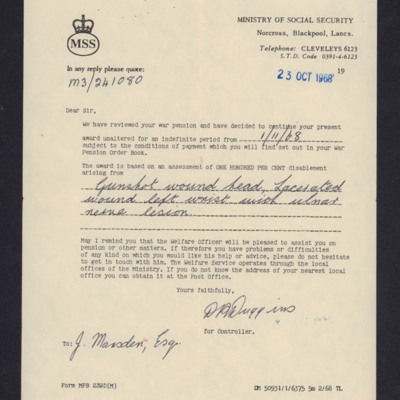 The letter advises Jack that his pension will continue indefinitely. 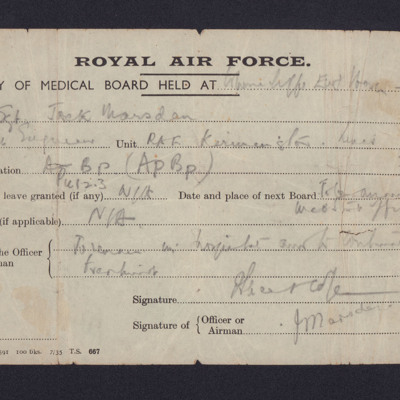