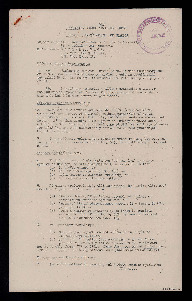 Covers officers who may hear charges, officers punishable summarily, charges against officers, charges against W.O.s, charges against N.C.O.s and aircraftsmen, use of forms for hearing charges, orderly room procedures, civil offences committed by service personnel, necessity for investigating charges promptly and change of arrest or release without prejudice to re-arrest. Followed by two appendixes, the first lists offences punishable summarily on active service without reference to higher authority and the second on orderly room procedures.

1. (a) Commanding Officer – normally the Station Commander; but on certain stations the officer commanding a unit is specifically authorised by the Air Council to exercise the full disciplinary powers of C.O.

(b) Subordinate Commander – Officer commanding a unit or section who is subordinate to C.O. for disciplinary purposes and to whom C.O. has delegated powers of punishment.

2. There are only certain offences which C.O. (or subordinate commander) can dispose of summarily without permission of A.O.C. These offences are shown in K.R. 1129, and for convenience are set out in App. “A” to this precis. This power of summary disposal does not prevent C.O. from sending accused charged with any of these offences for trial by C.M. when sufficiently serious to warrant punishment beyond his powers.

3. Other offences under A.F.A. normally tried by C.M., but C.O. may in appropriate circumstances apply to A.O.C. to permit summary disposal by C.O.

4. When C.O. learns of circumstances that may lead to charge against an officer, he will investigate them to decide whether:-
(a) To prefer charge; or
(b) To administer reproof (K.R. 1154) or
(c) Refer matter to superior authority; or
(d) No foundation for further action.

5. If charge preferred, C.O. will investigate by hearing witnesses’ evidence in presence of accused and:-

(a) Dismiss charge, if satisfied accused not guilty, or insufficient evidence against him; or
(b) “reprove” him if circumstances warrant it – (see A.P. 837, para. 734 (iv)); or
(c) Order a summary of evidence to be taken to consider whether to apply for trial by C.M. or summary disposal by A.O.C. for which see K.R. 1153.

(a) Confidential reports on and courts of inquiry into misconduct by officers.
(b) Administrative action (not amounting to an air force punishment) which may follow misconduct by an officer;
See A. P. 837, paras. 733 to 735A. (Note that C.O. cannot [underlined] punish [/underlined] an officer, “[indecipherable]” not being classed as a punishment under A.F.A.)

7. Procedure outlined in paras. 4 and 5 above applies equally to

warrant officers, except that, if charge preferred (whether by C.O. or other officer), case first heard formally by subordinate Commander but must always be remanded after investigation to C.O.

8. Charge to be investigated in first instance by subordinate commander who will decide whether:-

(a) To remand case to C.O. where offence sufficiently serious or beyond Subordinate Commander’s powers, or where charge sent by authority outside station, or
(b) To award a punishment within his powers, subject where applicable to accused’s right to elect trial by C.M. (A.F.A. Sect. 46 (8), or
(c) To dismiss the charge.

9. Charges remanded by subordinate commander are heard by C.O., who may:-

(a) Dismiss charge if insufficient evidence or case trivial, or as a matter of discretion for any reason, e.g. good character of accused; or
(b) Award punishment within his powers, subject where applicable to right to elect trial, or
(c) Order Summary of Evidence to be taken with a view to trial by C.M., or
(d) If offence not punishable summarily, apply to A.O.C. for permission to deal with case.

[Underlined] Use of Forms for Hearing Charges [/underlined]

10. Charge Form 252, for written statement of charge against airman. Raised by person preferring charge and sent to accused’s subordinate commander (via Guard Room, if close arrest).

(a) Subordinate Commander when hearing charges.
(b) Adjutant for P.O.R. and documentary action.
(c) C.O. for reviewing punishments by subordinate commanders.

(a) For recording details of airmen in close arrest.
(b) By C.O. when hearing charges remanded to him.

13. “Orderly Room” – term used to denote procedure by which C.O. or subordinate commander disposes of charges and also hears applications and complaints. Should be held each day if any cases (no objection in war-time on Sunday). Hour for C.O.’s Orderly Room should be laid down in Station Standing Orders, to allow subordinate commanders to investigate in all cases first.

14. Orderly Room procedure, described in App. “B” to this Precis, applies not only to C.O. but also to Subordinate Commander who must thoroughly investigate all matters even if beyond his powers to deal with. Junior Officers should be detailed to attend C.O.’s Orderly Room under instruction.

15. Civil authorities decide whether to deal with such cases or request C.O. to do so. Certain offences, listed in A.M.O. A.532/42, have to be reported to the civil police.

16. When charges referred by civil power to C.O. to deal with,

17. Commanders should ensure that all charges brought against persons under their command are dealt with as promptly as possible. Considerations include:-

(a) Accused, who may be in arrest, is in a state of suspense.
(b) Delay in disposal contributes to lowering of morale.
(c) Evidence of witnesses become less reliable as time passes.
(d) Witnesses may be posted overseas.

18. C.O. has discretion to change arrest from close to open or to release from arrest without prejudice to re-arrest.

[Underlined] Amendments to this Precis : [/underlined]

[Underlined] APPENDIX “A” TO PRECIS ON INVESTIGATION OF CHARGES. [/underlined]

10 (2) Assaulting escort
10 (3) Resisting escort
10 (4) Breaking out of camp
11 Neglecting to obey any general, local, or other orders.
14 Assistance of or connivance at desertion
15 Absence without leave
18 (1) Malingering or feigning or producing disease or infirmity.
18 (3) Producing or aggravating disease or infirmity, or delaying its cure.
19 Drunkenness (aircraftmen only)
20 Permitting prisoner to escape (except if act is wilful).
21 Irregular arrest or confinement
22 Escape from confinement
Deficiency in and injury to equipment.
27 (4) False statement as to leave
33 False answers or declaration on enlistment (except enlistment from R.A.F. reserve).
34 General offences in relation to enlistment.
39A (1) (a) and (b) Damage to aircraft, etc., where the damage is small and the act or neglect is not wilful.
39A (2) (a) Signing a certificate in relation to an aircraft without ensuring the accuracy thereof.
40 Minor irregularities contrary to good order and air force discipline.

[Underlined] Amendments to this Appendix [/underlined] :-

[Underlined] APPENDIX “B” TO PRECIS ON INVESTIGATION OF CHARGES. [/underlined]

1. Adjutant, having satisfied himself all in order, enters C.O’s office, salutes and reports: “Orderly Room present and correct, Sir”, handing him Guard Report F.160 and charge F.252. C.O. Orders “March In” and puts on his cap. Adjutant passes order to S.W.O., and stands to left and just behind C.O. Subordinate Commander and any officers under instruction enter and stand to right of C.O.

2. S.W.O. then marches airmen in one by one for applications and complaints, which should come first. Then comes the accused. S.W.O. outside orders “Accused, cap off”, and then marches in escort, accused and all witnesses. C.O. reads from Guard Report F.160 the charge, beginning with accused’s service particulars; e.g. “No.345679 LAC Blank, H; is that your correct number, rank and name? . . . You are charged on . . . (date) at . . . (place) with, when on active service . . .”

3. If accused demands, evidence to be given on oath.

4. S.W.O. marches out all witnesses except the first.

5. First witness gives evidence. C.O. asks accused if he wishes to question (i.e. cross-examine) witness. C.O. questions witness further if any points require clearing up. Witness then to be marched out.

6. Same procedure with other witnesses against accused, one by one.

8. C.O. after considering evidence, adopts one of the courses indicated in para. 9 of precis. If decides guilty, calls for conduct sheet F. 121, which must not be looked at earlier by C.O. under any circumstances so as not to prejudice case.

9. C.O. examines F.121 to consider what punishment in light of accused’s record. If proposing to award punishment involving loss of accused’s pay, asks :- “Will you accept my punishment, or do you elect to be tried by Court Martial?”

10. If accused does not elect, C.O. awards punishment; if accused elects, remands for summary of evidence; in both cases entering details on F.160 and F.252.

12. If necessary to remand for further evidence, charge to be brought forward daily (on F.160 or F.281) to C.O. or Subordinate Commander as applicable; not necessary for accused to be brought in person.

[Underlined] Amendments to this Appendix [/underlined] :-

19. At the summary hearing of a charge against an A.C.1, the C.O. being dissatisfied with the evidence of the first witness ordered the evidence of all witnesses to be given on oath. Comment on this. [Inserted] NO. [/inserted]

20. A F/Lt. Subordinate Commander remands a L.A.C.W., charged with improper possession, to the C.O. Is this right? [Inserted] NO [/inserted]