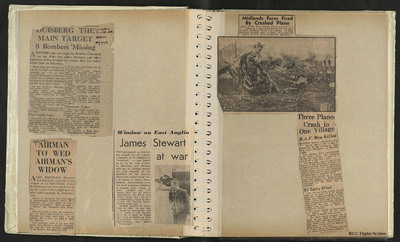 ANOTHER raid was made by Bomber Command on the Ruhr last night, Duisberg and other objectives being attacked in weather that was rather better than on Thursday.
Fires were left burning by our force, eight of which are missing, as well as two Coastal Command machines which hit a tanker during an attack on enemy shipping off the Norwegian coast.
An Air Ministry communique stated today:
“Last night our heavy bombers attacked Duisberg and other objectives in the Ruhr.
“Yesterday evening aircraft of Coastal Command attacked enemy shipping off the Norwegian coast. A tanker was hit with a torpedo.
“Eight bombers and two aircraft of Coastal Command are missing.”

Not a Large Force

The force over Germany was not a large one, writes a Press Association air correspondent, and the weather experienced, although very cloudy, showed a slight improvement upon conditions encountered the previous night.
Pilots saw fires break out in the target area.
Duisberg, largest inland port in Europe, was last attacked on March 26 when a strong force of heavy bombers caused fires and explosions.
Last night’s was the 58th attack on this important target.
British bombers last night dropped H.E. and incendiary bombs on several localities in Western Germany, says German radio.
“The population suffered casualties,” it adds. A number of enemy bombers were shot down by A.A. fire and night fighters.

The large enemy tanker torpedoed off the Norwegian coast was anchored in a Norwegian fjord.
It was attacked by a Hampden of a Coastal Command New Zealand Squadron. A second smaller vessel is also believed to have been hit and damaged, says Air Ministry News Service.
The captain, a flight lieu-
(Continued in Column 4.)

ALEX HENSHAW, 27-years-old test pilot, is to marry the widow of his best friend, Count de Chateaubrun, who was killed in an air crash in Paris eight months after his marriage in December 1937.
Notice of marriage has been given at Southampton Register Office. The wedding will take place at Westminster Cathedral. “But the date is a secret,” Mr. Henshaw said yesterday.
Alex Henshaw a year ago yesterday set out from Gravesend to win the England-to-Cape-and-back flying record. He is now test pilot of Spitfire fighters.
The countess, who is 24, was formerly Miss Barbara Maude Wenman. She was the only British competitor in the Sahara Air Rally of 1938.

THIS photograph – interesting enough and old enough, I suppose, to be classified as “historical” – was loaned to me by Mr. John Archer, of Earsham, near Bungay, who has an abiding passion for and interest in the activities of the U.S.A.F. during the second world war.
It shows, of course, James Stewart, disembarking from his B-24 Liberator following a mission from Hethel in 1944. Stewart was well known then for his screen appearances, but he is even better known now. He paid a sentimental return to some of his old Norfolk haunts several years ago.
Stewart arrived at Tibenham in 1943. He was then a Squadron Commander, and after being at Old Buckenham for a spell he finally took over at Hethel as Wing Commander. His Liberator, incidentally, was named “Ten-of-vus.”
[Photograph]

One of the three planes which crashed in a Midlands village lying among the wreckage of farm buildings which it set ablaze. A large building housing cattle, a Dutch barn, and ten stacks of corn were completely destroyed.
[Photograph]

Three Planes Crash in One Village

THREE planes crashed with heavy loss of life to R.A.F. personnel at the village of Hatfield, near Doncaster, on Monday night.
The crashes were unconnected with each other, and occurred within an hour and a half in a radius of a mile and a half.
The first plane hit the end of the house of Mr. and Mrs. T. Platt, in Coppice-avenue, Hatfield, sending a shower of bricks over the bed where two young daughters were sleeping, but the girls and the other occupants of the house all escaped injury.
The plane landed on a poultry farm and caught fire. Some of the men were dragged from the blazing wreckage by Mr. Platt and a neighbour.

The second plane struck buildings on the farm of J. C. Wright and Son. A large building in which cattle were housed was set on fire, and a Dutch barn and 10 stacks of corn also became involved, all being destroyed by fire. Twenty-five cattle were burned to death or otherwise killed.
The plane missed the farmhouse by inches. One of the crew [missing letters]ped, suffering from shock.
The third plane crashed into a field on the farm of Mr. George Brown and killed six sheep sheltering under trees. None of the crew escaped. There was no damage to the farm in this case.
There were no civilian injuries in either of the three accidents.