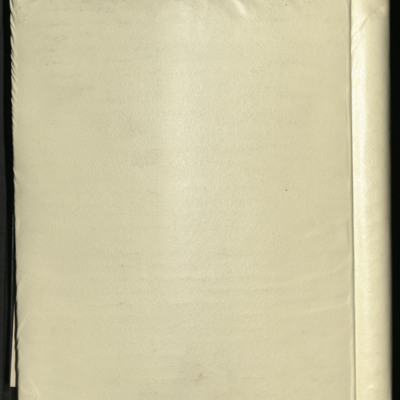 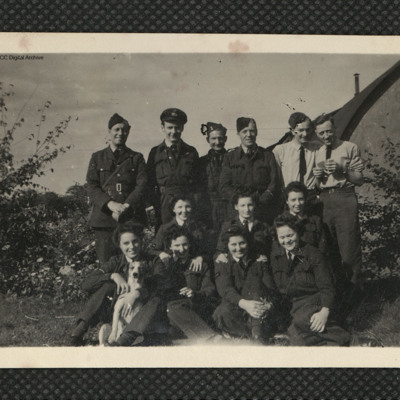 Six servicemen wearing variety of uniform standing and six members of the Women's Auxiliary Air Force sitting in front. Left front has a dog. In the background right, part of a hut. On the reverse 'MT Section, Sandtoft Aug 1944'. 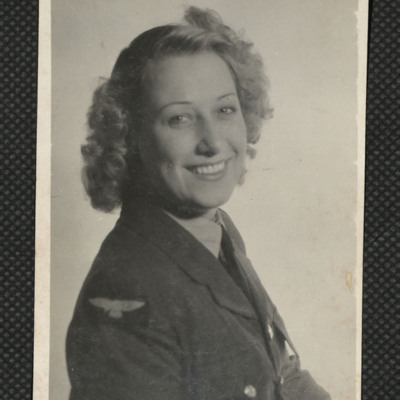 Head and shoulders portrait of a member of the Women's Auxiliary Air Force wearing tunic. On the reverse 'Remember this night darling, W, 13/9/44'. 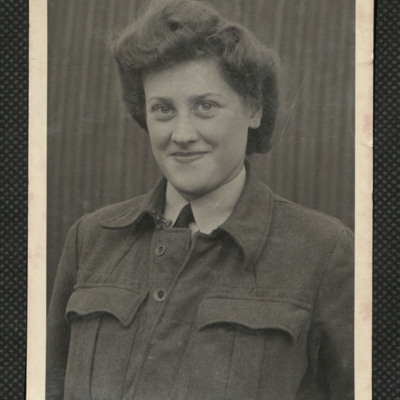 Head and shoulders portrait of a member of the Women's Auxiliary Air Force wearing battledress. On the reverse 'To Nicky with best wishes from one of good old TT scroungers, Sylvia'. 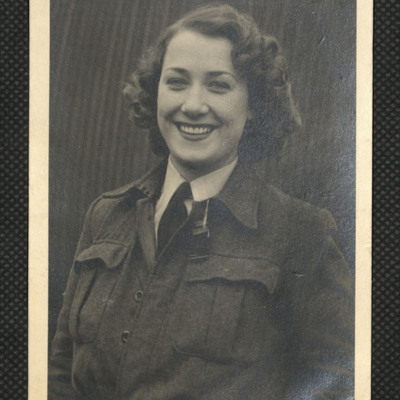 Head and shoulders portrait of a member of the Women's Auxiliary Air Force wearing battledress. On the reverse 'To Jill, the sweetest friend I have, Aileen'. 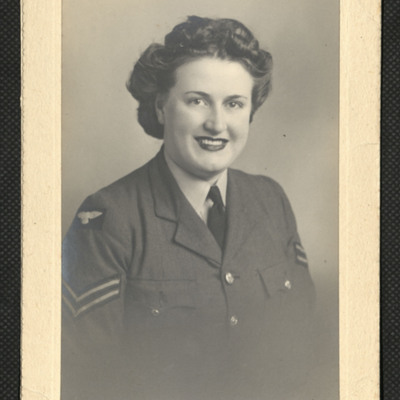 Head and shoulders portrait of a member of the Women's Auxiliary Air Force wearing tunic with corporal rank, On the reverse 'To Jill, one of the best from Betty 1943 xxxxxx'. 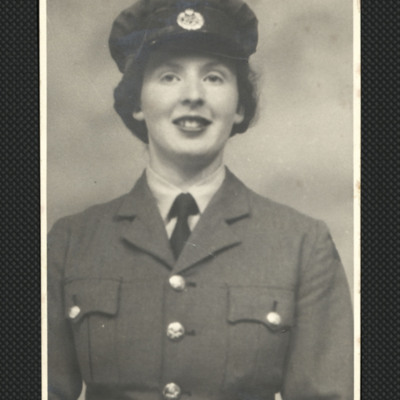 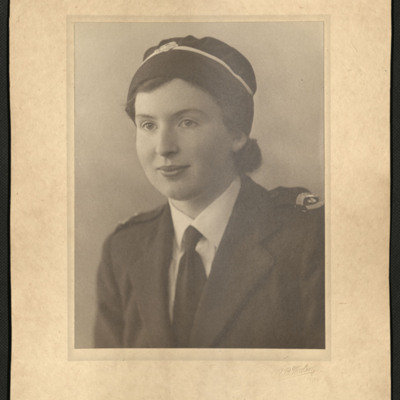 Head and shoulders portrait of a woman wearing uniform tunic and hat. 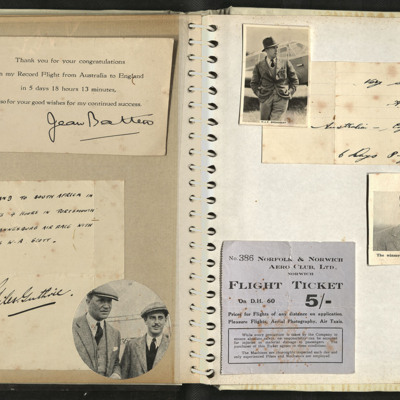 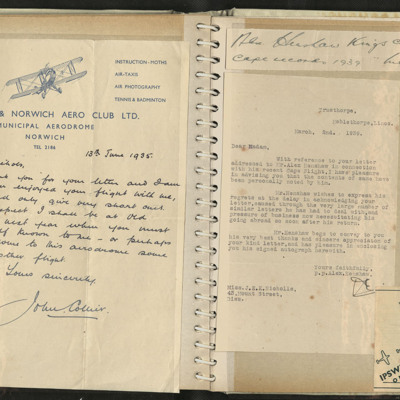 Left page - letter from John Collier on Norfolk and Nowich Aero Club headed paper, thanking Jill Nicholls for her letter which thanked him for the flight she took with him. Right page - Title at top - 'Alex Henshaw Kings Cup 1938 and Cape records…

Aircraft and a letter 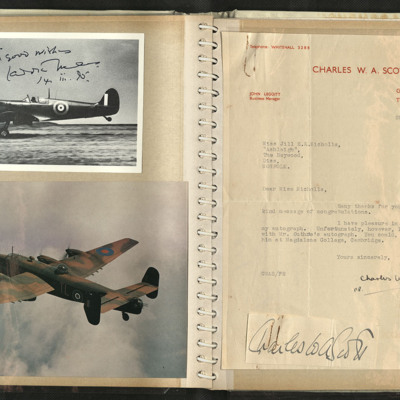 Left page. Top - side view of a Spitfire taking off. Signed 'To Jill with wishes [….]'. Bottom - air-to air view looking down on a Halifax.
Right page - a letter from Charles W A Scott thanking Jill Nicholls for her congratulatory letter and… 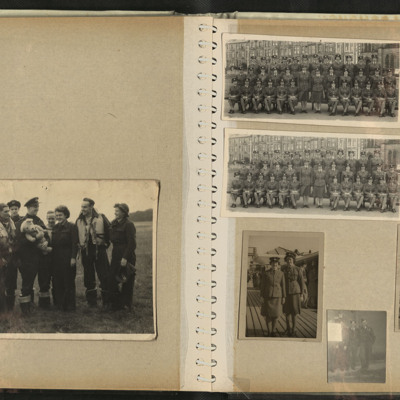 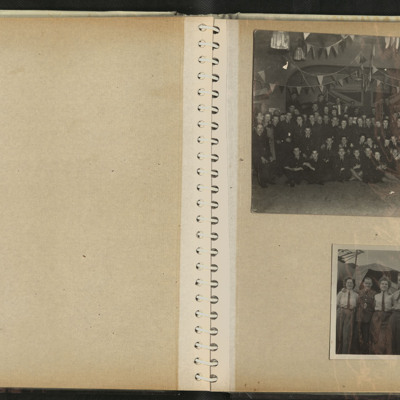 Right page. Top a large group of servicemen and women, some sitting on the floor and other standing in a room decorated with bunting.
Bottom - two servicemen one wearing tunic and two members of the Women's Auxiliary Air Force in shirtsleeves… 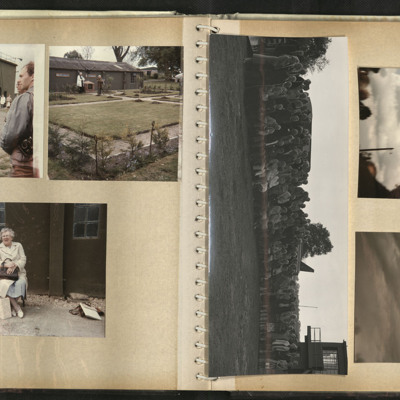 Left page. Top left - group of men and women outside a control tower. Two men closer to camera on right hand edge.
Top right - a clergyman wearing white surplus standing behind a man at a lectern. Both in front of a single story green wartime hut… 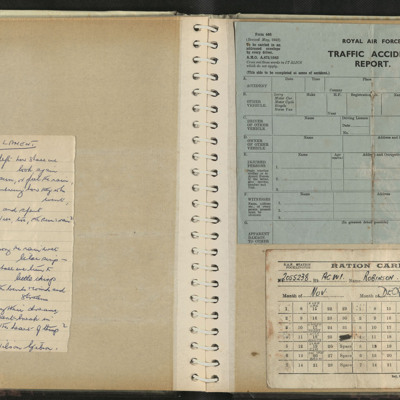 5-Nazi 'Cobber' was only turned down by RAF 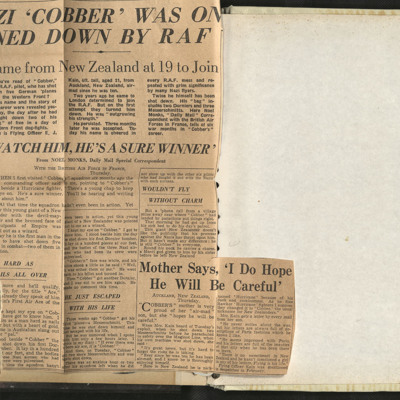 Newspaper cutting account of Flying Officer E J Kain a New Zealander turned down on his first attempt to join the RAF. He had now been shot down twice but himself shot down two Dornier and three Messerschmitt. Includes photograph. 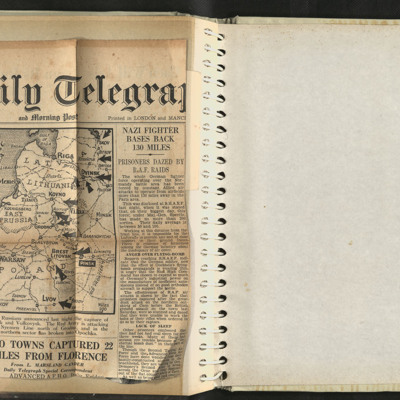 Newspaper cutting. The whole German fighter force operating over Normandy forced to operate from bases more that 130 miles away. Report that German propaganda about flying bombs wearing thin. Problems of German soldiers with lack of sleep in… 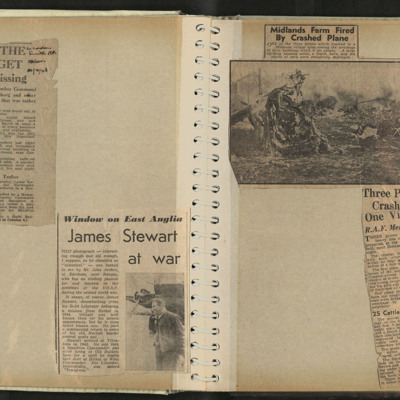 Photographs of people and aircraft and newspaper cutting Left page. Top - Ground operations. Photograph of farm workers piling hay on a rick with a Halifax bomber behind.
Bottom - a large group of airmen, some with brevet standing in three rows wearing variety of uniform and caps.
Right page. Top left… 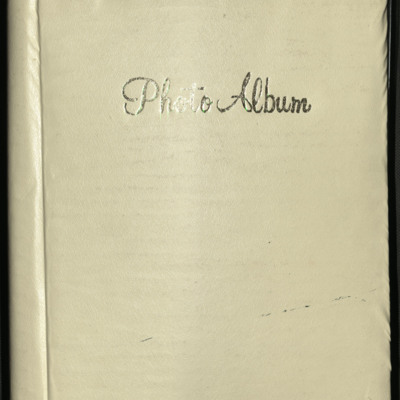