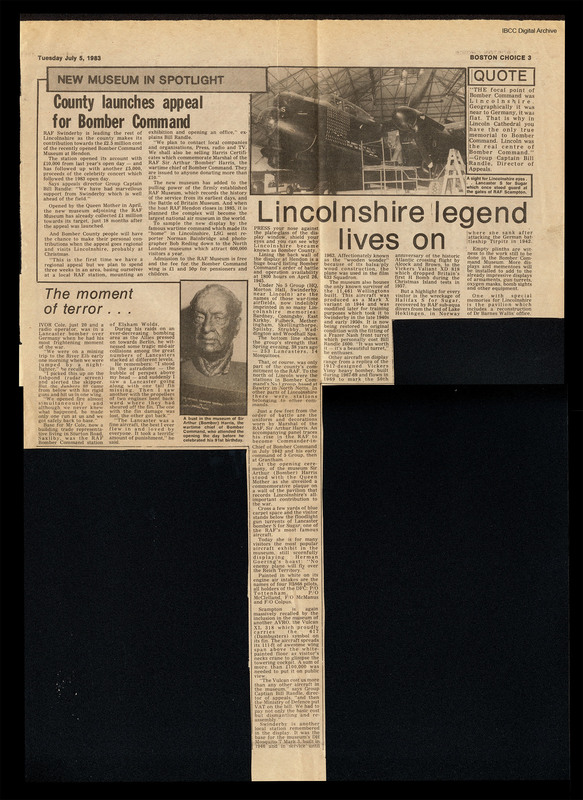 Article 1 refers to funding for the Bomber Command museum at Hendon from RAF Swinderby.
Article 2 is a wartime memoir by Ivor Cole, 103 Squadron.
Article 3 describes some of the exhibits at the new Hendon museum.

One newspaper cutting from an album

Tuesday, July 5, 1983
BOSTON CHOICE 3
NEW MUSEUM IN SPOTLIGHT
[Bold] County launches appeal for Bomber Command [/bold]
RAF Swinderby is leading the rest of Lincolnshire at the county makes it contribution towards the £2.5 million cost of the recently opened Bomber Command Museum at Hendon.
The station opened its account with £10,000 from last year’s open day – and has followed up with another £5,000, proceeds of the celebrity concert which followed the 1983 open day.
Says appeal director Group Captain Bill Randle: “We have had a marvellous support from Swinderby which is well ahead of the field.”
Opened by the Queen Mother in April, the new museum adjoining the RAF Museum has already collected £1 million towards its target, just 18 months after the appeal was launched.
And Bomber County people will have the chance to make their personal contributions when the appeal goes regional and visits Lincolnshire, probably at Christmas.
“This is the first time we have a regional appeal but we plan to spend three weeks in an area, basing ourselves at a local RAF station, mounting an exhibition and opening an office,” explains Bill Randle.
“We plan to contact local companies and organisations, Press, radio and TV. We shall also be selling Harris Certificates which commemorate Marshall of the RAF Sir Arthur ‘Bomber’ Harris, the wartime chief of Bomber Command. They are issued to anyone donating more than £10.”
The new museum has added to the pulling over of the firmly established RAF museum, which records the history of the service from its earliest days, and the Battle of Britain Museum. And when the host RAF Hendon closes in 1985, it is planned the complex will become the largest national air museum in the world.
To sample the new display by the famous wartime command which made its “home” in Lincolnshire, LSG sent reporter Norman Bainbridge and photographer Bob Reding down to the North London Museums which attract 600,000 visitors a year.
Admission to the RAF Museum is free and the fee for the Bomber Command wing is £1 and 50p for pensioners and children.

[Heading] Quote [/heading]
“The focal point of Bomber Command was Lincolnshire. Geographically it was near to Germany, it was flat. That is why in Lincoln Cathedral you have the only true memorial to Bomber Command. Lincoln was the real centre of Bomber Command.” – Group Captain Bill Randle, Director of Appeals.

[Heading] The moment of terror… [/heading]
[Photograph of a bust of Sir Arthur Harris – inscription reads: A bust in the museum of Sir Arthur (Bomber) Harris, the wartime chief of Bomber Command, who attended the opening day before he celebrated his 91st birthday.]

IVOR [sic] Cole, was just 20 and a radio operator, was in a Lancaster bomber over Germany when he had his most frightening moment of the war.
“We were on a mining trip to the River Elb early one morning when we were jumped by a night-fighter.” he recalls.
“I picked this up on the fishpond (radar screen) and alerted the skipper. But the Junkers 88 came from below with his rigid guns and hit us in one wing.
“We opened fire almost simultaneously and although we never knew what happened, he made only one run at us and we got safely back to base.”
Base for Mr Cole, now a building trade representative living in Sturton Road, Saxilby, was the RAF Bomber Command station of Elsham Wolds.
During his raids on an ever-decreasing bombing area as the Allies pressed on towards Berlin, he witnessed some tragic mid-air collisions among the great numbers of Lancasters stacked at different levels.
He remembers; “I stood in the astrodome – the bubble of Perspex above my head – and suddenly I saw a Lancaster going along with one tail fin missing. Then I saw another with the propellers of two engines bent backward where they had sheared off the fin. The one with the fin damage was lost, the other got back”
“The Lancaster was a fine aircraft, the best I ever flew in and loved by everyone. It took a terrific amount of punishment,” he said.

[Heading] Lincolnshire legend lives on [/heading]
[Photograph of a Lancaster Bomber – inscription reads – A sight for Lincolnshire eyes… Lancaster S for Sugar which once stood guard at the gates of RAF Scampton.]
Press your nose against the plate-glass of the display window, shield your eyes and you can see why Lincolnshire became known as Bomber County.
Lining the back wall of the display at Hendon is a huge board listing Bomber Command’s order of battle and operation availability at 1800 hours on April 26, 1945.
Under No 5 Group (HQ, Morton Hall, Swinderby, near Lincoln) are the names of those war-time airfields, now indelibly imprinted in so many Lincolnshire memories: Bardney, Fulbeck, Metheringham, Skellingthorpe, Spilsby, Strubby, Wadington and Woodhall Spa.
The bottom line shows the groups strength that Spring evening 38 yars [sic] ago – 253 Lancasters, 14 Mosquitoes.
That, of course was only part of the country’s commitment to the RAF. To the north of Lincoln were the stations in Bomber Command’s No 1 group, based at Bawtry in North Notts, in other parts of Lincolnshire there were stations belonging to other commands.
Just a few feet from the order of battle are the uniform and decorations worn by Marshal of the RAF, Sir Arthur Harris. An accompanying panel traces his ride in the RAF to become Commander-in-Chief of Bomber Command in July 1942 and his early command of 5 Group, then at Grantham.
At the opening ceremony, of the museum Sir Arthur (Bomber) Harris stood with the Queen Mother as she unveiled a commemorative plaque on a wall of the pavilion that records Lincolnshire’s all-important contribution to the war.
Cross a few yards of blue carpet space and the visitor stands below the floodlight gun turrets of Lancaster bomber S for Sugar, one of the RAF’s most famous aircraft.
Today she is for many visitors the most popular aircraft exhibit in the museum, still scornfully displaying Herman Goering’s boast: “No enemy plane will fly over the Reich Territory.”
Painted in white on its engine air intakes are the names of four R5868 pilots, all holders of the DFC: P/O Tottenham, P/O McClelland, F/O McManus and F/O Colpus.
Scampton is again massively recalled by the inclusion in the museum of another AVRO, the Vulcan XL 318 which proudly carries the 617 (Dambusters) symbol on its fin. The aircraft spreads its 111-ft of awesome wingspan above the white painted floor as visitor’s necks crane to glimpse the towering cockpit. A sum of more than £100,000 was needed to put it on public view.
“The Vulcan cost us more than any other aircraft in the museum,” says Group Captain Bill Randle, director of appeals, “and then the Ministry of Defence put VAT on the bill. We had to pay not only the basic cost but dismantling and re-assembly.”
Swinderby is another local station remembered in the display. It was the base for the museum’s DH Mosquito T Mark 3, built in 1946 and in service until 1963. Affectionately known as the “wooden wonder” because of its balsa/plywood construction, the plane was used in the film 633 Squadron.
The museum also houses the only known survivor of the 11,461 Wellingtons built. This aircraft was produced as a Mark X variant in 1944 and was modified later for training purposes which took it to Swinderby in the late 1940s and early 1950s. It is now being restored to original condition with the fitting of a Frazer Nash front turret which personally cost Bill Randle £600. “It was worth it – it’s a beautiful turret,” he enthuses.
Other aircraft on display range from a replica of the 1917- designed Vickers Vimy heavy bomber, built during 1967-69 and flown in 1969 to mark the 50th anniversary of the historic Atlantic crossing flight by Alcock and Brown, to the Vickers Valiant XD 818 which dropped Britain’s first H Bomb during the Christmas Island tests in 1957.
But a highlight for every visitor is the wreckage of Halifax S for Sugar, recovered by RAF sub-aqua divers from the bed of late Hoklingen, in Norway where she sank after attacking the German battleship Tirpitz in 1942.
Empty plinths are witness to the work still to be done in the Bomber Command Museum. More displays and mementoes will be installed to add to the already impressive displays of armaments, gun turrets, oxygen masks, bomb sights and other equipment.
One with special memories for Lincolnshire is the pavilion which includes a reconstruction of Dr Barnes Wallis’ office.