I went back, saw Duisburg die 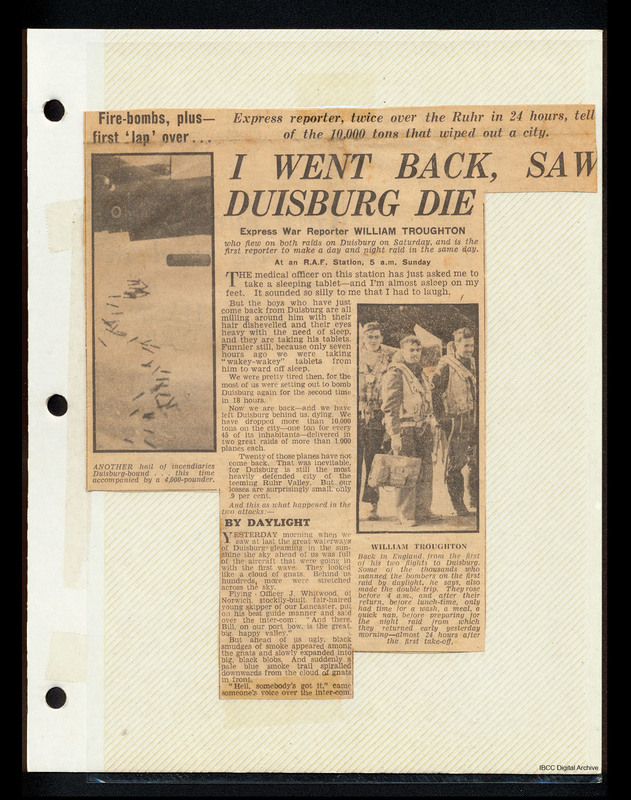 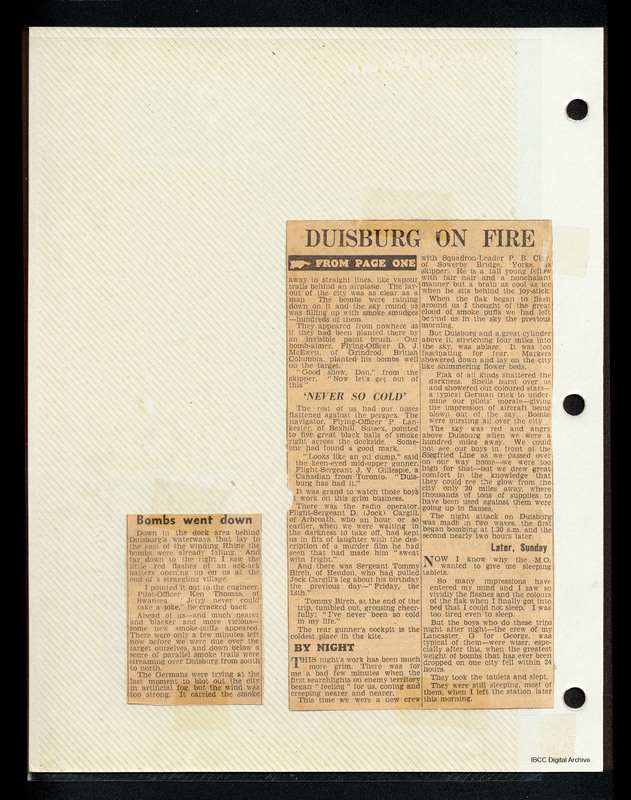 I went back, saw Duisburg die

An article describing daylight and night time operations on Duisburg. There is a photograph of a Lancaster dropping a 4000 pound bomb and incendiaries and a photograph of an aircrew. The crew is Flying Officer J Whitwood, pilot and Ken Thomas navigator.. Flying Officer D J McEwen is the bomb aimer. Flying Officer P Lankester is a navigator. Flight Sergeant JV Gillespie is a mid-upper gunner. Flight Sergeant D 'Jock' Cargill is the radio operator. Sergeant Tommy Birch is the rear gunner.
The second flight crew was captained by Squadron Leader P B Clay. The aircraft was Lancaster G for George.

Fire-bombs, plus-first ’lap’ over…
Express reporter, twice over the Ruhr in 24 hours, tells of the 10,000 tons that wiped out a city.
I WENT BACK, SAW DUISBURG DIE
Express War Reporter WILLIAM TROUGHTON
Who flew on both raids on Duisburg on Saturday, and is the first reporter to make a day and night raid in the same day.
At an R.A.F. Station, 5 a.m. Sunday
The medical officer on this station has just asked me to take a sleeping tablet – and I’m almost asleep on my feet. It sounded so silly to me that I had to laugh.
But the boys who have just come back from Duisburg are all milling around him with their hair dishevelled and their eyes heavy with the need of sleep, and they are taking his tablets. Funnier still, because only seven hours ago we were taking “wakey-wakey” tablets from him to ward off sleep.
We were pretty tired then, for the most of us were setting out to bomb Duisburg again for the second time in 18 hours.
Now we are back - and we have left Duisburg behind us. Dying. We have dropped more than 10,000 tons on the city - one ton for every 45 of its inhabitants - delivered in two great raids of more than 1,000 planes each.
Twenty of those planes have not come back. That was inevitable, for Duisburg is still the most heavily defended city of the teeming Ruhr Valley. But our losses are surprisingly small, only .9 per cent.
And this is what happened in the two attacks:-
BY DAYLIGHT
Yesterday morning when we saw at last the great waterways of Duisburg gleaming in the sunshine the sky ahead of us was full of the aircraft that were going in with the first wave. They looked like a cloud of gnats. Behind us hundreds more were stretched across the sky.
Flying-Officer J. Whitwood, of Norwich, stockily-built, fair-haired young skipper of our Lancaster, put on his best guide manner and said over the inter-com: “And there Bill, on our port bow, is the great big happy valley.”
But ahead of us ugly, black smudges of smoke appeared among the gnats and slowly expanded into big, black blobs. And suddenly a pale blue smoke trail spiralled dowmwards from the cloud of gnats in front.
“Hell, somebody’s got it,” came someone’s voice over the inter-com.
[picture left]
Another hail of incendiaries Duisburg-bound … this time accompanied by a 4,000-pounder.
[picture left]
WILLIAM TROUGHTON
Back in England from the first of his two flights to Duisburg. Some of the thousands who manned the bombers on the first raid by daylight, he says, also made the double trip. They rose before 4 a.m., and after their return, before lunch-time, only had time for a wash, a meal, a quick nap, before preparing for the night raid from which they returned early yesterday morning – almost 24 hours after the first take-off.


DUISBURG ON FIRE
FROM PAGE ONE
Bombs went down
Down in the dock area behind Duisburg’s waterways that lay to the east of the winding Rhine the bombs were already falling. And far down to the right I saw the little red flashes of an ack-ack battery opening up on us at the end of a straggling village.
I pointed it out to the engineer, Pilot-Officer Ken Thomas, of Swansea. ‘Jerry never could take a joke.” he cracked back.
Ahead of us – and much nearer and blacker and more vicious – some new smoke-puffs appeared. There were only a few minutes left now before we were due over the target ourselves, and down below a score of parallel smoke trails were streaming over Duisburg from south to north.
The Germans were trying at the last moment to blot out the city in artificial fog, but the wind was too strong. It carried the smoke away in straight lines, like vapour trails behind an airplane. The lay-out of the city was as clear as a map. The bombs were raining down on it and the sky round us was filling up with smoke smudges – hundreds of them.
They appeared from nowhere as if they had been planted there by an invisible paint brush. Our bomb-aimer, Flying-Officer D.J. McEwen, of Grindrod, British Columbia, planted his bombs well on the target.
“Good show, Don,” from the skipper. “Now let’s get out of this”
‘NEVER SO COLD’
The rest of us, had our noses flattened against the Perspex. The navigator, Flying-Officer P. Lankester, of Bexhill, Sussex, pointed to five great black balls of smoke right across the dockside. Someone had found a good mark.
“Looks like an oil dump” said the keen-eyed mid-upper gunner, Flight-Sergeant J.V. Gillespie, a Canadian from Toronto. “Duisburg has had it.”
It was grand to watch those boys at work on this grim business.
There was the radio operator, Flight-Sergeant D. (Jock) Cargill, of Arbroath, who an hour or so earlier, when we were waiting in the darkness to take off, had kept us in fits of laughter with the description of a murder film he had seen that had made him “sweat with fright.”
And there was Sergeant Tommy Birch, of Hendon, who had pulled Jock Cargill’s leg about his birthday the previous day – “Friday, the 13th.”
Tommy Birch, at the end of the trip, tumbled out, grousing cheerfully: “I’ve never been so cold in my life.”
The rear gunner’s cockpit is the coldest place in the kite.
BY NIGHT
This night’s work has been much more grim. There was for me a bad few minutes when the first searchlights on enemy territory began “feeling” for us, coning and creeping nearer and nearer.
This time we were a new crew with Squadron-Leader P.B. Clay, of Sowerby Bridge, Yorks, as skipper. He is a tall young fellow with fair hair and a nonchalant manner but a brain as cool as ice when he sits behind the joy-stick.
When the flak began to flash around us I thought of the great cloud of smoke puffs we had left behind us in the sky the previous morning.
But Duisburg and a great cylinder above it, stretching four miles into the sky, was ablaze. It was too fascinating for fear. Markers showered down and lay on the city like shimmering flower beds.
Flak of all kinds shattered the darkness. Shells burst over us and showered out coloured stars – a typical German trick to undermine our pilot’s morale – giving the impression of aircraft being blown out of the sky. Bombs were bursting all over the city.
The sky was red and angry above Duisburg when we were a hundred miles away. We could not see our boys in front of the Siegfried Line as we passed over on our way home – we were too high for that – but we drew great comfort in the knowledge that they could see the glow from the city only 30 miles away, where thousands of tons of supplies to have been used against them were going up in flames.
The night attack on Duisburg was made in two waves, the first began bombing at 1.30 a.m. and the second nearly two hours later.
Later, Sunday
Now I know why the M.O. wanted to give me sleeping tablets.
So many impressions have entered my mind and I saw so vividly the flashes and the colours of the flak when I finally got into bed that I could not sleep. I was too tired even to sleep.
But the boys who do these trips night after night – the crew of my Lancaster G for George, was typical of them – were wiser, especially after this, when the greatest weight of bombs that ever has been dropped on one city fell within 24 hours.
They took the tablets and slept.
They were still sleeping, most of them, when I left the station later this morning.