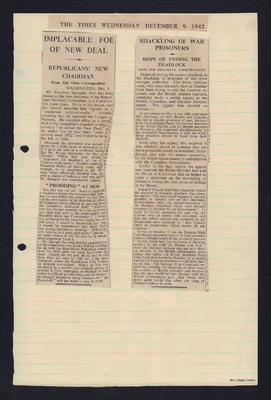 From Our Own Correspondent

Mr. Harrison Spangler, who has been chosen as the new chairman of the Republican National Committee, is a Conservative from Iowa. He is in his sixties, and his friends describe him vaguely as a “moderate internationalist” notwithstanding that he opposed the League o[missing letter] Nations. He accepted office, as it carrie[missing letter] with it the committee’s mandate to help [missing word] country “to defeat the New Deal,” a[missing letters] he added that he had been “after [missing words] animal since 1932,” and hoped to be [missing words] the kill in 1944.

HOPE OF ENDING THE DEADLOCK

FROM OUR DIPLOMATIC CORRESPONDENT

Hopes of ending the present deadlock in the shackling of prisoners of war grew stronger yesterday. The Swiss Government, who since the early days of October have been trying to end the German reprisals and the British counter-reprisals, yesterday made a public appeal to the British, Canadian, and German Governments. The appeal was worded as follows:-

In the conviction that it was with reluctance that Germany, as with Britain and Canada, was led to shackle prisoners of war, Switzerland, the protecting Power for German interests in the British Empire and for British interests in Germany, has suggested simultaneously to the interested Governments a date on which those prisoners should be freed from their shackles.

Soon after the appeal was received it was officially stated in London that the Swiss proposals would be examined immediately, and with the utmost sympathy, by the British Government in consultation with the Canadian Government.

Earlier in the day, before the appeal was received, the Prime Minister had told the House of Commons that he hoped to make a statement on the manacling of prisoners during the next series of sittings in the House.

Asked if Canada had been consulted before the decision to manacle prisoners was taken, he replied, “On account of urgency it was not possible to consult any of the Dominion Governments upon the counter-measures to the German shacklings which were deemed necessary in October by the Government.” In reply to further questions he said that the Cabinet were of course fully consulted, and that the fullest explanations tendered to the Dominions were accepted in “that friendly spirit of cooperation which marks all our relations.”

It was on October 7 that the German High Command announced that all British prisoners taken at Dieppe would be put in chains because “British troops had tied the hands of German soldiers in the raids on Dieppe and Sark.” After the German decision was put into effect on October 8, the British Government gave notice that unless the British prisoners were freed from their bonds by October 10, an equal number of German prisoners would have their hands tied. The German High Command replied by ordering the shackling of three times the number of British prisoners and declared that the men would be kept chained until the British Government gave clear notice that never again would they allow any tying of German soldiers in raids.