Two articles and a rhyme. The viceroy's term, Darlan a danger to the allies and so help me Darlan 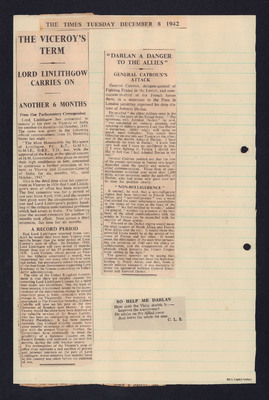 Two articles and a rhyme. The viceroy's term, Darlan a danger to the allies and so help me Darlan

From Our Parliamentary Correspondent

Lord Linlithgow has consented to remain at his post as Viceroy of India for another six months – till October, 1943. The news was given in the following official announcement from 10, Downing Street last night:-

“The Most Honourable the Marquess of Linlithgow, P.C., K.T., G.M.S.I., G.M.I.E., O.B.E., T.D., has, with the approval of the King, at the special request of H.M. Government, who place on record their high confidence in him, consented to undertake a further extension of his term as Viceroy and Governor-General of India for six months, [italics] viz., [italics] until October, 1943.”

This is the third time since his appointment as Viceroy in 1936 that Lord Linlithgow’s term of office has been extended. The first extension was for a period of one year from April, 1941, and the reasons then given were the circumstances of the war and Lord Linlithgow’s patient handling of the delicate constitutional problems which had arisen in India. The following year the second extension for another 12 months took effect. Now comes a third extension, this time for six months.

Had Lord Linlithgow returned home next April he would then have been Viceroy nine months longer than the total period of Lord Curzon’s term of office. By October, 1943, Lord Linlithgow will have served 15 months longer than any of his 17 predecessors since 1858. Lord Curzon, whose period as Viceroy had hitherto constituted a record, was reappointed for two years after his first term had ended, but prematurely retired on account of the then home Government supporting Lord Kitchener in the famous controversy on Indian Army administration.

The view of the United Kingdom Government is that there are weighty reasons for extending Lord Linlithgow’s tenure for a third time under war conditions. Not the least of these reasons, it is claimed, would be the inconvenience of the simultaneous change in several important posts in India, coincident with the change in the Viceroyalty. For instance, as announced in [italics] The Times [/italics] last Saturday, Colonel Colville will take up his post as the new Governor of Bombay next March. A new Viceroy would therefore have been deprived of the valuable services of Sir Roger Lumley, who has been an outstanding success in the Western Presidency. It has been deemed desirable that Colonel Colville should have some months’ experience of office in association with the present Viceroy. Further, the Government have continually in mind the possibility of a Japanese invasion on the Eastern frontier and seaboard in the next few months, during the cold weather season.

The prolongation of the Viceroy’s term of office must represent a real sacrifice of private and personal interests on the part of Lord Linlithgow, whose statutory four months’ leave to this country was taken before the outbreak of war.

“DARLAN A DANGER TO THE ALLIES”

General Catroux, delegate-general of Fighting France in the Levant, and commander-in-chief of the French forces there, in a statement to the Press in London yesterday expressed his deep distrust of Admiral Darlan.

He recalled “the oldest military story in the world,” – the story of the Trojan horse. “The agreement with Admiral Darlan,” he said, “was concluded on military grounds, and speaking on military grounds I say that Darlan is dangerous. Hitler might well make an attack upon Gibraltar. You would have Gibraltar on one side and Tunisia on the other, and in the middle Admiral Darlan. I have absolutely no trust in Darlan. I know him very well and I have no confidence in him. If I were fighting in Tunisia I should not like to feel that I had Admiral Darlan in my rear.”

General Catroux pointed out that the fate of the present campaign in Tunisia very largely depended upon the quality and security of allied communications. Those lines of communications stretched over more than 1,200 miles, across territories under the authority of Darlan, who had taken very good care not to state his position clearly.

It seemed, he said, that a non-belligerent régime had been instituted in French North Africa, and “non-belligerence” was a word that carried the same unfortunate associations as the name of the man at the head of the regime. “We feel entitled to wonder,” added the general, “whether his presence at the very heart of the allied communications with the armies in Tunisia can be reconciled with the security of those armies.

“The end of the Darlan régime would mean the total re-entry of North Africa and French West Africa into the war. It would mean that powerful forces would be at the service of the cause of France and her allies. It would mean the elimination of the man who personifies the armistice of 1940 and the policy of collaboration, and the disappearance of the obstacle which prevents the French Empire from uniting in the fight.”

The general summed up by saying that circumstances had changed since the American landing in North Africa and that, from a purely military viewpoint, it was necessary to revise the agreement between General Eisenhower and Admiral Darlan.

SO HELP ME DARLAN
How doth the Vichy double b –
Improve the Eisenhower?
He settles on the Allied cause
And turns the whole lot sour.
G.L.S.

“Two articles and a rhyme. The viceroy's term, Darlan a danger to the allies and so help me Darlan,” IBCC Digital Archive, accessed January 26, 2022, https://ibccdigitalarchive.lincoln.ac.uk/omeka/collections/document/21968.