Two articles: 'Landings in Madagascar' and 'Huge fires in Düsseldorf' 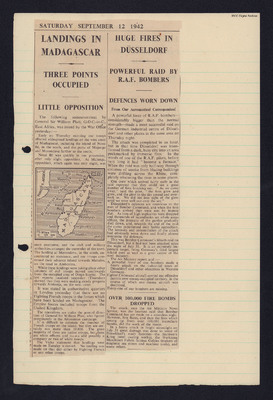 Two articles: 'Landings in Madagascar' and 'Huge fires in Düsseldorf'

Early on Thursday morning our troops effected widespread landings on the west coast of Madagascar, including the island of Nossi Bé, in the north, and the ports of Majunga and Morondava farther to the south.

Nossi Bé was quickly in our possession, after only slight opposition. At Majunga, opposition, which again was only slight, was
[map]
soon overcome, and the civil and military authorities arranged the surrender of the town. The landing at Morondava, in the south, encountered no resistance, and our troops continued their advance inland towards Mahabo, on the road to Ambositra.

While these landings were taking place other columns of our troops moved southwards from the occupied area of Diego Suarez. The last reports received yesterday (Thursday) showed that they were making steady progress towards Ambanjo, on the west coast.

It was stated in authoritative quarters in London yesterday that there are no Fighting French troops in the forces which have been landed on Madagascar. The Empire forces included troops from the United Kingdom.

The operations are under the general direction of General Sir William Platt, who figured prominently in the Abyssinian campaign.

It is difficult to estimate the number of French troops on the island, but they are certainly not more than 10,000. The great majority of these are native troops, but there are white officers and n.c.o.s and possibly a company or two of white troops.

The Vichy statement that landings were made on Tuesday is denied. No landing was made on that day either by Fighting French or any other troops.

From Our Aeronautical Correspondent

A powerful force of R.A.F. bombers – considerably bigger than the normal strength – made a most successful raid on the German industrial centre of Düsseldorf and other places in the same area on Thursday night.

The attack was completed in an hour, but in that time Düsseldorf was transformed from a dark, busy city into an area pockmarked by immense fires. In the words of one of the R.A.F. pilots, before very long it had “become a furnace,” When the raid was only half-way through columns of smoke from blazing buildings were drifting across the Rhine, completely obscuring the river in some places.

One crew which arrived fairly early in the raid reported that they could see a great number of fires breaking out. “As we came away,” said the pilot, “the fires grew and grew, and the glow in the sky spread and overtook us. We did not lose sight of the glow until we were well out over the sea.”

Düsseldorf’s defences are notorious to the men of Bomber Command, and when the first bombers arrived they were met by intense [italics] flak [/italics]. As tons of high explosives were dropped and thousands of incendiaries set whole areas ablaze, the intensity of the gunfire gradually died down, and, towards the end of the raid the crews experienced only feeble opposition. The intensity and concentration of the attack had obviously worn down and finally almost overcome the defences.

This was Bomber Command’s fiftieth raid on Düsseldorf, but it had not been attacked since the night of July31. It is an extremely important target, being Germany’s third largest inland port as well as a great centre of the steel industry.

A powerful force of our bombers made a heavy attack on the industrial town of Düsseldorf and other objectives in Western Germany.

Fighter Command aircraft carried out offensive patrols over enemy-occupied territory, in the course of which one enemy aircraft was destroyed.

Thirty-one of our bombers are missing.

The attack, says the Air Ministry News Service, was the heaviest raid that Bomber Command has yet made on a moonless night. However, first flares, and then the fires which sprang up from over 100,000 incendiary bombs, did the work of the moon.

In a heavy attack in bright moonlight on July 31 great damage was done to some of Düsseldorf’s main factories – the Stahlwerk Krieg (steel casting works), the Werkzeug Maschinen Fabrik Schiess Gefries (makers of magnetic sea mines and machine tools), and many others.