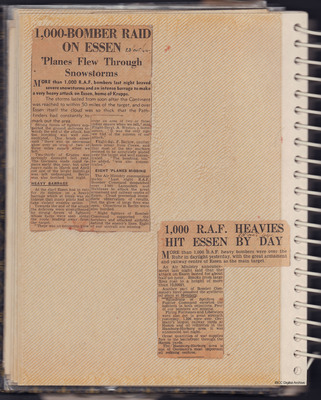 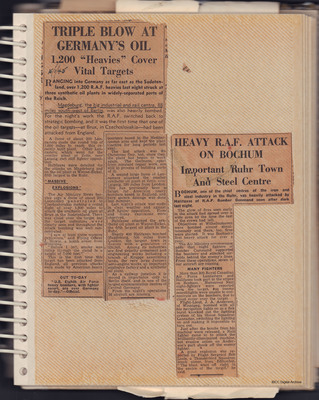 Four newspaper cuttings from an album

The storms lasted from soon after the Continent was reached to within 50 miles of the target, and over Essen itself the cloud was so thick that the Pathfinders had constantly to mark out the area.

Strong forces of fighters supported the ground defences towards the end of the attack, but the bombing was well concentrated. One bomb aimer said “there was an enormous glow over an area of two or three miles square when we left.”

Two-thirds of Krupps was seriously damaged last year. The Germans made rapid repairs early this year, but after heavy raids in March and April not one of the larger buildings was left undamaged. Berlin was also bombed last night.

At the start Essen had to rely for its defence on a heavy barrage which at times was so intense that many pilots had to take violent evasive action.

Towards the end of the attack the defences were strengthened by strong forces of fighters whose flares were seen along the route leading away from the target.

“There was an enormous glow over an area of two or three miles square when we left,” said Flight-Sergt. A. Weston, a bomb aimer. “It was the only sign we had of the success of our attack.”

Flight-Sgt. F. Barlow, another bomb aimer from Crewe, said that most of the sky markers seemed to be accurately placed over the target and well concentrated. “The bombing, too,” he added; “was also concentrated.”

The Air Ministry communique states: “Last night R.A.F. Bomber Command despatched over 1000 Lancasters and Halifaxes to attack the great armament and railway centre of Essen. Cloud prevented immediate observation of results, but the glow of large fires was seen. Objectives in Berlin were also bombed.

“Night fighters of Bomber Command supported the bombers and attacked airfields behind the enemy’s lines. Eight of our aircraft are missing.”

MORE than 1,000 R.A.F. heavy bombers were over the Ruhr in daylight yesterday, with the great armament and railway centre of Essen as the main target.

An Air Ministry announcement last night said that the attack on Essen lasted for about half an hour. Smoke from large fires rose to a height of more than 10,000ft.

Squadrons of Spitfires of Fighter Command escorted the bombers to both objectives. Four of our bombers are missing.

Flying Fortresses and Liberators were also out in great strength yesterday; 1,200 were over Germany’s largest railway yards at Hamm and oil refineries in the Hamburg-Harburg area, it was announced last night.

Great quantities of war supplies flow to the battlefront through the Hamm yards.

The Hamburg-Harburg area is one of Germany’s most important oil refining centres.

RANGING into Germany as far east as the Sudetenland, over 1,200 R.A.F. heavies last night struck at three synthetic oil plants in widely-separated parts of the Reich.

[underlined] Magdeburg, the big industrial and rail centre, 88 miles south-west of Berlin [/underlined], was also heavily bombed. For the night’s work the R.A.F. switched back to strategic bombing, and it was the first time that one of the oil targets – at Brux, in Czechoslovakia – had been attacked from England.

A force of about 200 Lancasters made the round trip of 1,600 miles to reach this recently built plant. Other Lancasters, which went for the smaller plant at Zeitz, near Leipzig, met stiff fighter opposition.

Halifaxes were detailed for the attacks on Magdeburg and on the oil plant at Wanne-Eickel, fifth largest in the Ruhr.

The Air Ministry News Service says a force of about 200 Lancasters penetrated to Czechoslovakia making a round flight of over 1,600 miles to attack the synthetic oil plant at Brux in the Sudetenland. There was cloud over the target but the target indicators were clearly seen and throughout the attack bombing was well concentrated.

“Before I left, smoke was rising through the cloud to a height of 7,000 feet.”

This is the first time this target has been attacked from England, all previous attacks were made by American heavy

bombers based in the Mediterranean area and kept the plant inactive for long periods last year.

The last attack was on Christmas Day, but, since then, the plant has begun to work again. The Germans, apart from constant repair work, are still in process of building parts of it.

A second large force of Lancasters attacked the smaller synthetic oil plant at Zeitz, near Leipzig, 530 miles from London. This has previously been a target for American heavy bombers based in England, and very severe damage was done last summer.

Last night’s attack was made in clear weather and against stiff fighter opposition. Fires and many explosions were observed.

Halifaxes attacked the synthetic oil plant at Wanne-Eickel, the fifth largest oil plant in the Ruhr.

Nearly 400 Halifaxes bombed Magdeburg, 500 miles from London, the largest town in Saxony with a population of 320,000. Among its industries are first priority armament and engineering works including a branch of Krupps assembling tanks, the very large Junkers aero-engine works, an important explosive factory and a synthetic oil plant.

As a railway junction it is second in importance only to Berlin itself, and is one of the largest communication centres of Central Germany.

From the night’s operations 28 aircraft are missing.

BOCHUM, one of the chief centres of the iron and steel industry in the Ruhr, was heavily attacked by Halifaxes of R.A.F. Bomber Command soon after dark last night.

The glow of fires seen early in the attack had spread over a wide area by the time the last of the crews had left.

Objectives at Wilhelmshaven were bombed almost simultaneously and there, too, fires were started. It was Bochum’s first heavy attack for over a year.

The Air Ministry communique adds that night fighters of Bomber Command supported the bombers and attacked airfields behind the enemy’s lines. From these operations, seven of our aircraft are missing.

More than 200 Royal Canadian Air Force Lancasters and Halifaxes took part in the attack on Bochum. Numerous Nazi night-fighters were reported over the target, but enemy searchlights were unable to concentrate on the bombers, due to cloud cover over the target.

Flight-Lieut. J.A. Anderson, of Winnipeg, bombed with all his navigation lights on as a flak burst knocked out the lighting system of his Moose Squadron Lancaster, switching the lighting on and making it impossible to turn out.

Just after the bombs from his machine were released, a Nazi fighter came in to attack the brilliantly-illuminated machine, but evasive action on Anderson’s part shook off the enemy fighter.

A great explosion was reported by Flight Sergeant Bob Losie, a Thunderbird Squadron bomb aimer, from Edmonton. “The blast went off right in the centre of the target,” he said.