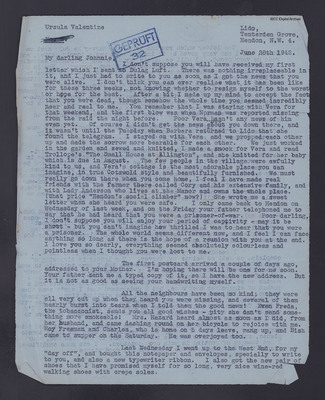 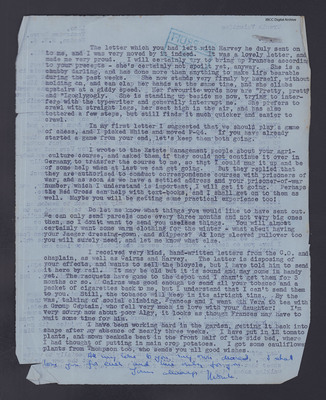 Writes she is not sure if he received her first letter when he was at Dulag Luft. Describes her feeling and events over three weeks and reactions of all when she found out he was a prisoner. Hoping there would be a postcard soon. Describes recent activities and comments on letter he wrote in case he went missing. Suggest playing chess and informs him of possibility of continuing agricultural course while in Germany. Requests she lets him know what he would like her to send and mentions letters she had received from CO and chaplain.

I don’t suppose you will have received my first letter which I sent to Dulag [sic] Luft. There was nothing irreplaceable in it, and I just had to write to you as soon as I got the news that you were alive. I don’t think you can ever realise what it has been like for these three weeks, not knowing whether to resign myself to the worst or hope for the best. After a bit I made up my mind to accept the fact that you were dead, though somehow the whole time you seemed incredibly near and real to me. You remember that I was staying with Vera for that weekend, and the first blow was when Norman was reported missing from the raid the night before. Poor Vera hasn’t any news of him even yet. Of course I didn’t get the news about you down there, and it wasn’t until the Tuesday when Barbara returned to Lido that she found the telegram. I stayed on with Vera and we propped each other up and made the sorrow more bearable for each other. We just worked in the garden and sewed and knitted, I made a smock for Vera and read Trollope’s “The Small House at Allington”, and she knitted for her baby which is due in August. The few people in the village were awfully kind to us, and Vera’s cottage is the most adorable place you can imagine, in true Cotswold style and beautifully furnished. We must really go down there when you come home, I feel I have made real friends with the farmer there called Cory and his extensive family, and with Lady Anderson who lives at the Manor and owns the whole place. (What price “Hendon’s social climber” now?) She wrote me a sweet letter when she heard you were safe. I only came back to Hendon on Wednesday of last week, and on the Friday your father telephoned me to say that he had heard that you were a prisoner-of-war. Poor darling, I don’t suppose you will enjoy your period of captivity - may it be short - but you can’t imagine how thrilled I was to hear that you were a prisoner. The whole world seems different now, and I feel I can face anything so long as there is the hope of a reunion with you at the end. I love you so dearly, everything seemed absolutely colourless and pointless when I thought you were lost to me.

The first postcard arrived a couple of days ago, addressed to your Mother. I’m hoping there will be one for me soon. Your father sent me a typed copy of it, so I have the new address. But it is not as good as seeing your handwriting myself.

All the neighbours have been so kind; they were all very cut up when they heard you were missing, and several of them nearly burst into tears when I told them the good news! Even Freda, the tobacconist, sends you all good wishes - pity she can’t send something more smokeable! [sic] Mrs. Hazard heard almost as soon as I did, from her husband, and came dashing round on her bicycle to rejoice with me. Roy Freeman and Charles, who is home on 5 days leave, rang up, and Bish came to supper on the Saturday. He was overjoyed too.

Last Wednesday I went up to the west End, for my “day off”, and bought this notepaper and envelopes, specially to write to you, and also a new typewriter ribbon. I also got a new pair of shoes that I have promised myself for so long, very nice wine-red walking shoes with crepe soles.

The letter which you had left with Harvey he duly sent on to me, and I was very moved by it indeed. It was a lovely letter, and made me very proud. I will certainly try to bring up Frances according to your precepts - she’s certainly not spoilt yet, anyway. She is a chubby darling, and has done more than anything to make life bearable during the past weeks. She now stands very firmly by herself, without holding on, and can clap her hands at the same time, and she climbs upstairs at a giddy speed. Her favourite words now are “Pretty, pretty” and “Igoglygogly. She is standing up beside me now, trying to interfere with the typewriter and generally interrupt me. She prefers to crawl with straight legs, her seat high in the air, and has also tottered a few steps, but still finds it much quicker and easier to crawl.

In my first letter I suggested that we should play a game of chess, and I picked White and moved P-Q4. If you have already started a game from your end, let’s keep them both going.

I wrote to the Estate Management people about your agriculture course, and asked them, if they could [underlined] not [/underlined] continue it over in Germany, to transfer the course to me, so that I could mug it up and be of some help when at last we can get going. But they replied that they are authorised to conduct correspondence courses with prisoners of war, and as soon as we have a settled address and your prisoner-of-war number, which I understand is important, I will get it going. Perhaps the Red Cross can help with text-books, and I shall get on to them as well. Maybe you will be getting some practical experience too!

Do let me know what things you would like to have sent out. We can only send parcels once every three months and not very big ones then, so I don’t want to send you useless things. You will almost certainly want some warm clothing for the winter - what about having your Jaeger dressing-gown, and slippers? A [deleted] l [/deleted] long sleeved pullover too you will surely need, and let me know what else.

I received very kind, hand-written letters from the C.O. and chaplain, as well as Cairns and Harvey. The latter is disposing of your effects, and wants to sell the bicycle, but I have told him to send it here by rail. It may be old but it is sound and may come in handy yet. The racquets have gone to the depot and I shan’t get them for 3 months or so. Cairns was good enough to send all your tobacco and a packet of cigarettes back to me, but I understand that I can’t send them to you. Still, the tobacco will keep in its airtight tins. By the was, [sic] talking of social climbing, Frances and I went with Vera to tea with a Group Captain, who fell very much in love with your daughter! I’m very sorry now about poor Algy, it looks as though Frances may have to wait some time for him.

I have been working hard in the garden, getting it back into shape after my absence of nearly three weeks. I have put in 12 tomato plants, and sown seakale beat in the front half of the side bed, where I had thought of putting in main crop potatoes. I got some cauliflower plants from Thompson too, who sends you all good wishes.

All my love to you my own dearest. I shall love you for ever and live only for you. Yours always Ursula.

Dulag Luft; grief; In the event of my death letter; prisoner of war