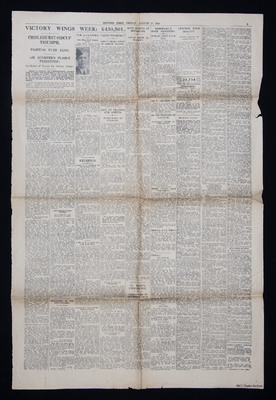 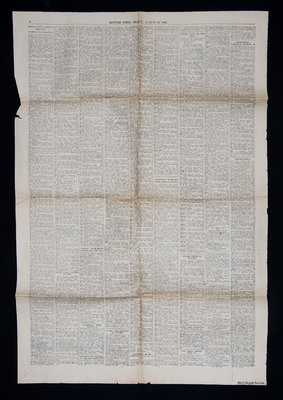 Kentish times page with announcement of Distinguished Flying Medal.Notice parents living in Sidcup. Citation states carried out many successful sorties and noted on one operation that some crew lost consciousness due to lack of oxygen and on another his aircraft was damage but he carried out attack. Surrounded by other articles. Classified advertisements on the reverse.

Certificates of Honour for Savings Groups.

Business in connection with Chislehurst-Sidcup’s successful Wings for Victory Week was brought to a close at a final meeting of the committee on Tuesday evening, when Group Captain Gordon, C.B.E., M.C., D.F.C., on behalf of the Secretary of State for Air, presented the committee with a plaque in recognition of the district’s successful achievement in the Wings for Victory campaign.

It was announced that the final figure for the Week was £430,501. The Fighting Fund reached a total of £2,930 15s. 2d., and it was agreed to divide £2,700 between the benevolent funds of the three Fighting Services and the Merchant Navy.

In the absence of the hon. treasurer, Mr. J. Gaffney presented his report showing that the final total for the week amounted to £430,501. Comparative figures for previous weeks were also submitted, showing that the War Weapons Week (1941) total amounted to £321,971 and Warship Week (1942) £370,346. He drew attention to the steady increase in each of the Weeks, and particularly to the amounts subscribed by small investors, which in the Wings for Victory Week showed an increase of 36 per cent. more than the Warship Week, and 52 per cent. more than the War Weapons Week.

These increases reflected the fact that the local Savings organisation had been developed upon sound lines, and that the hard steady work of group secretaries and other voluntary workers was in no small way responsible for the success of the whole Savings campaigns.

In regard to the Fighting Fund, a statement was submitted showing that the total receipts from all the districts amounted to £2,930 15s. 2d. which, after meeting expenses amounting to £99 5s. 6d., left a balance in hand of £2,831 9s. 8d. Every part of the district had achieved most successful results in their efforts for the Fighting Fund, and particular mention was made of the wonderful success achieved by the smaller parts of the area, namely St. Paul’s Cray and North Cray, who raised £468 8s. 5d. and £234 5s. 2d. respectively.

Mr. Franks, in his report on the Week, said that, inspired by the motto of the campaign, “Wings for Victory,” and having in mind the immeasurable debt owed to the Royal Air Force, the National Savings group and street secretaries worked with such energy and enthusiasm to obtain the set target of £280,000 that it was possible to announce after the first few days of the campaign that that figure had been passed, and by the end of the Week the total raised was more than 50 per cent. higher than the target. Few could realise the tremendous amount of time and labour which these voluntary workers devoted towards the National Savings effort, not only during special drives, but throughout the 52 weeks of the year. Special thanks were due to them for the valuable services they continued to render.

From the inaugural ceremony to the closing ceremony, every event showed that a great amount of work had been performed by the special committees, district committees and sub-committees and organisers, and it was gratifying to know that in addition to raising over £430,000 in savings, they would be able to assist the benevolent funds of the Fighting Forces and the Merchant Navy in an appreciable manner.

The effort by so many voluntary helpers on behalf of the Fighting Fund was a noteworthy achievement, and he could not speak too highly of the manner in which they gave of their time and energy and worked so harmoniously together to achieve so magnificent a result. From the efforts of these voluntary helpers a wonderful community spirit had been apparent, and he strongly recommended that the district committees formed for “Wings” Week should continue to meet and arrange social gatherings from time to time, thus fostering the community spirit in their respective districts which would undoubtedly tend to strengthen and stimulate the National Savings Movement in the urban district. Not least among the social benefits that arose from the Savings campaign was the influence that it exerted upon the future generation of citizens.

Mr. Franks concluded with thanks to the president, Mr. T. Harrison, and Mr. A.G. Beechey, and all who had helped in the district obtaining its objective.

Group Captain Gordon then presented the plaque on behalf of the Secretary of State for Air. He congratulated the district on its most successful efforts during the Wings for Victory campaign, and said the result showed that the district had whole-heartedly supported the Royal Air Force in its war tasks, and the Secretary of State for Air accepted this as a tribute to the work of the R.A.F.

Mr. Beecher Bryant, in accepting the plaque, thanked Group Captain Gordon for his personal assistance in connection with the Week, and said it was appropriate that, having performed the inaugural ceremony, he should be associated with the closing phases of the campaign.

He expressed his gratitude to the whole of the inhabitants of the district for all they had done during the campaign, and particularly thanked the vice-president, Admiral Beal, for his wonderful assistance, and the chairmen, secretaries, organisers and members of the district committees. The figures in relation to investments and contributions to the Fighting Fund showed clearly that every district in the area had played its parts to the full. He particularly thanked Mr. Beechey of Martins Bank, Sidcup (hon. Treasurer), and Mr. Franks, upon whose shoulders such a tremendous amount of work fell. He was grateful to Mr. T. Harrison for all the assistance he had given, and expressed the hope that the local Savings Committee would now face any future calls that may be made upon them with full confidence that they would be able to discharge their responsibilities.

Mr. Harrison presented the log-books to be used in the bombers bought from the investments made in the area, and it was agreed that the district committees (St. Paul’s Cray and North Cray combining as one) should be invited to inscribe the names of their workers in the log-books before they were despatched to the Secretary of State for Air. It was reported that these books would ultimately be returned to the district with a complete history of the activities of the crews allocated to the bombers.

A discussion took place in connection with the allocation of the balance of the Fighting Fund and it was agreed that £2,700 should be allocated to the benevolent funds of the three Fighting Services and the Merchant Navy. In order that the donations may be paid over to the officially recognised funds, it was agreed that a committee consisting of Mr. Beecher Bryant, Admiral Beal, Mrs. Beecher Bryant, Mrs. Pierce, Captain Downes and Mr. G. White, be appointed to ascertain the names of the actual funds to which the contribution should be made.

In conclusion, Vice-Admiral Beal moved a hearty vote of thanks to the president and Mrs. Beecher Bryant for all they had done throughout the campaign. He paid tribute to the inspiring lead given by the president and his wife and expressed the gratitude of the committee to them for their very valuable assistance.

MOST GROUPS AND MEMBERS IN KENT.

The hon. Secretary (Mr. Gaffney) submitted statistics showing the weekly savings up to the end of July, bringing the total up to date to £3443,327.

It was reported that nine new groups had been formed since the last meeting, making a total of 477 for the whole area, which was the largest number of groups in the whole of Kent. The total number of members for the district was 19,892, which was also the highest membership in any district in Kent. This was equal to 33 per cent. of the population, but it was felt that these satisfactory figures might possibly be increased during the “Raise the Standard” campaign which would take place during the coming months.

Reports were received from each of the district committees showing that the work of the movement is being well looked after in every part of the urban area.

Vice-Admiral Beal submitted a report on the regional conference he had attended for which he was thanked.

Particulars were submitted of the “Raise the Standard” campaign which the district was asked to carry out during the next three months. The campaign will aim at increasing the membership in each road group to 75 per cent. of the householders in each road, and in places of employment to 50 per cent of the people employed.

It was agreed that the district committees should be asked to give consideration to the proposed campaign, and to work out their own plans for their respective districts.

Pilot Officer Hedley Robert Madgett, of 127, Longlands-road, Sidcup, has been awarded the Distinguished Flying Medal, and is at the same time reported missing. His parents, Mr. and Mrs. L.R. Madgett, received the telegram containing this news last week.

The official citation in connection with the award states that he has completed many successful sorties against strongly defended targets in Germany and Italy. On one occasion when detailed to attack Oberhausen, the bomb aimer, navigator, and flight-engineer lost consciousness owing to lack of oxygen, and Pilot-Officer Madgett (then sergeant) completed the mission successfully. On another occasion his aircraft was damaged by anti-aircraft fire during an attack, but he continued, dropped the bombs, and secured a photograph of the target area. He has displayed outstandingg [sic] courage, cheerfulness and determination on all his sorties, in face of the heaviest fire.

Born at Hither Green, Pilot-Officer Madgett is 20, and was educated at the Chislehurst-Sidcup County School. Before enlisting in 1940 he was employed as a clerk. He is keen on running.

Pilot Officer Claud Robert Wilson, R.A.F.V.R., who was born at Dover in 1922 has just been awarded the Distinguished Flying Cross. His home is at Sidcup, and he was educated at Dover County School. He served in the ranks before being commissioned in the R.A.F.V.R. in 1943.

“Pilot Officer Wilson has at all times,” states the citation, “shown exceptional keenness to participate in operations and has taken part in attacks on some of the most heavily defended targets in Germany, including Essen, Duisberg, Dortmund, Berlin and Wilhelmshaven. He has invariably pressed home his attacks with determination, displaying courage and a fine fighting spirit. This officer’s splendid example and his outstanding skill as a pilot and captain of aircraft have made his crew one of the most successful in the squadron.”