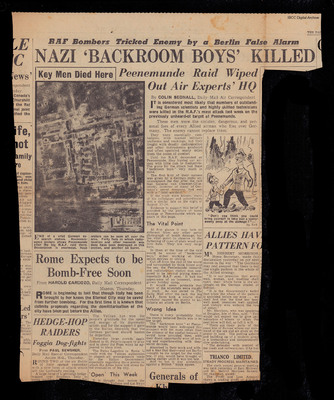 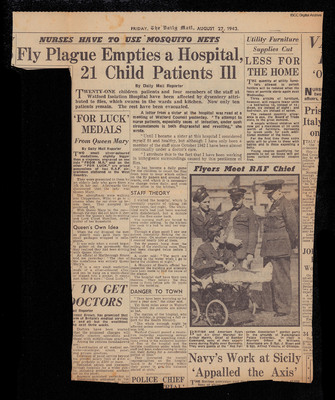 "Nazi backroom boys killed, Pennemunde raid wiped out air experts HQ". Account of Peenmeunde operation and background to research carried out there. Surrounded by other articles and further articles on the reverse.

End of a vital German research station. Reconnaissance picture shows Peenemunde after the big R.A.F. raid there. Devastation is enormous, huge craters can be seen all over the area. Forty huts in which radiolocation and other research was done have been destroyed in this section, and another 50 burnt.

It is considered most likely that numbers of outstanding German scientists and highly skilled technicians were killed in the R.A.F.’s mass attack last week on the previously unheard-of target of Peenemunde.

These men were the sinister, dangerous, and personal foes of every Allied airman who flies over Germany. The enemy cannot replace them.

They were essentially combatants, with normal military uniforms and rankings, but they fought with deadly radiolocation and other instruments produced and often operated many miles from the scene of combat.

Until the R.A.F. descended on Peenemunde, they hunted our airmen with little risk to themselves. The plans for the attack had these “backroom boys” very much in mind.

The first hint of their success was given by a German radio announcement the day after the raid that General von Chamier-Glisezenski, inventor of many of Germany’s secret weapons, had met with a “fatal accident.”

If the truth were known, many of his colleagues and subordinates met a similar fate on the night of August 17-18.

Evidence to support this belief is provided by the picture of bomb damage at Peenemunde which appears in this page.

At first glance it may look no different from any other aerial photograph of bomb damage, but the vital point to observe is the flattening of rows of plain wood and iron huts. They are very large huts.

In them at the time of the raid would be scores of “backroom boys,” either working at their secret devices or resting.

Cut off from the rest of the world and surrounded by thick forest and the sea, the Peenemunde research and radiolocation station was supposed to be beyond prying eyes – especially R.A.F. eyes. It had the appearance of an innocent, over-grown holiday camp.

It would seem probable that many of the scientists were caught at work. As was stated in [italics] The Daily Mail [/italics] after the raid, the big R.A.F. force took a course that probably caused the enemy to anticipate an attack on Berlin.

There is every probability that the enemy believed Berlin was to be the target.

The “backroom boys” at Peenemunde would have welcomed this prospect with far more relish than the citizens of the capital because it would have provided them with their finest opportunity ever of testing and experimenting with their secret devices.

Absorbed in their work and without a fear that they – and not Berlin – might be the target for the night, few, if any, would have thought of taking shelter until it was too late.

And no hut is any protection against a British “block buster.”

[cartoon]
“Don’t you think you could bring yourself to take just a teeny-weeny peep at the damage?” – by Neb

[underlined] NURSES HAVE TO USE MOSQUITO NETS [/underlined]

TWENTY-ONE children patients and four members of the staff at Watford Isolation Hospital have been affected by dysentery attributed to flies, which swarm in the wards and kitchen. Now only ten patients remain. The rest have been evacuated.

A letter from a sister at the hospital was read at a meeting of Watford Council yesterday. “To attempt to nurse patients, especially cases of infection, under such circumstances is both disgraceful and revolting,” she wrote.

“Until I became a sister at this hospital I considered myself fit and healthy, but although I have only been a member of the staff since October 1942 I have been almost continually under a doctor’s care.

“I attribute this to the fact that I have been working in unhygienic surroundings caused by this pestilence of flies.

“It has become a daily game for the children to count the flies from hour to hour which collect on the fly papers and around the wards, and which it is necessary to change twice daily, and even more often in the kitchen.”

I visited the hospital, which is normally capable of taking 140 fever cases, last night. The white-tiled walls had just been washed with disinfectant, but a minute later the flies came back.

The nursing staff are forced to sleep under netting. In the kitchen the cook has had to seal her cupboards.

Through a glass panel I saw one patient constantly flicking the insects away. On another counterpane I counted nearly 100 of them.

Ten fly papers hung from the ceiling of the sterilising room. They had been changed twice before I arrived.

A sister said: “The pests are floating in the water when I go to bathe the children at night.”

A Ministry of Health official has inspected the building and attempts have been made to find the cause of the plague.

The hospital staff have their own theories. They believe the flies come in from refuse pits 30 yards from the building.

“They have been worrying us for over a year now,” the sister said.

Yet three miles away in Watford High-street the swarms are almost as bad.

The matron of the hospital, who is on holiday, is preparing a full report for the Health Ministry.

“The whole borough might be affected unless something is done,” I was told.

Watford Council passed a resolution yesterday expressing serious concern “with the appalling conditions owing to the excessive number of flies at the hospital and the terrible conditions under which the staff had been endeavouring to carry out their duties for a considerable period of time.”

They instructed the council representatives on the hospital board to do “everything within their power to get this nuisance abated at once.”

TWO small silver-coloured medallions, slightly bigger than a sixpence, engraved on one side “FROM M.R.” and on the other “FOR LUCK,” are prizes possessions of two R.A.F. aircraftmen stationed in the West Country.

They were presented to them by an elderly lady who gave them a lift in her car. Afterwards they discovered that the lady was Queen Mary.

The aircraftmen were walking into Chippenham, Wilts. to go to a cinema when the car drew up beside them. They accepted the proferred lift.

With Queen Mary in the car – though the men did not know it then – were the Queen’s lady-in-waiting and Lord Claud Hamilton, comptroller of her household.

When the car dropped the men an elderly man gave them two small packages wrapped in cellophane.

It was only when a crowd began to gather on the pavements that they realised they had been driving with Queen Mary.

An official at Marlborough House told me yesterday: “The idea of the medallions was entirely Queen Mary’s.

“It is a very small medallion, made of a silver-coloured alloy, and can be hung on a watch-chain or slipped into a pocket. It means just what it says: ‘Good Luck.’”

BRITISH and American flyers tell Air Chief Marshal Sir Arthur Harris, Chief of Bomber Command, some of their experiences during flights over Germany. They were guests at the “Not Forgotten Association” garden party in the grounds of Buckingham Palace yesterday. In chair is Warrant Officer R. Williams. Americans are S/Sgt. J. Sloan and S/Sgt. Alfred Vickers, of Chicago.