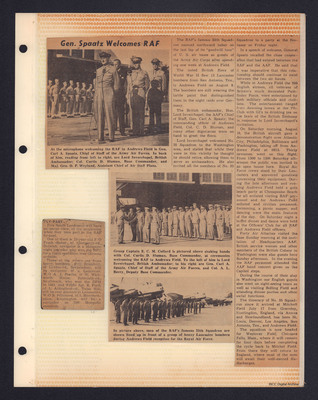 [photograph]
At the microphone welcoming the RAF to Andrews Field is Gen. Carl A Spaatz. Chief of Staff of the Army Air Forces. In back of him, reading from left to right, are Lord Inverchapel, British Ambassador; Col. Curtis D. Sluman, Base Commander, and Maj. Gen. O.P. Weyland, Assistant Chief of Air Staff Plans.

The RAF’s famous 35th Squadron zoomed northward today on the last lap of its “goodwill tour” of U.S. air bases as guests of the Army Air Corps after spending one week at Andrews Field.
The noted British fliers of World War II flew 12 Lancaster bombers from San Antonio, Tex., to Andrews Field on August 8. The bombers are still wearing the battle paint that distinguished them in the night raids over Germany.
The British ambassador, Hon. Lord Inverchapel; the AAF’s Chief of Staff, Gen. Carl A. Spaatz; the commanding officer of Andrews Field, Col. C.D. Sluman, and many other dignitaries were on hand to greet the fliers.
Lord Inverchapel welcomed No. 35 Squadron to the Washington area, and stated that while they were in this vicinity he thought he should retire, allowing them to serve as ambassadors. He also invited all the members of No. 35 Squadron to a party at the Embassy on Friday night.
In a speech of welcome, General Spaatz recalled the close cooperation that had existed between the RAF and the AAF. He said that it was imperative that this relationship should continue to exist between the two air forces.
While at Andrews Field the 200 English airmen, all veterans of Britain’s much decorated Pathfinder Force, were entertained by both military officials and civilians. The entertanment [Sic] ranged from downing brews at the Pfc. Club with GI’s to drinking tea on the lawn of the British Embassy in response to Lord Inverchapel’s invitation.
On Saturday morning, August 10, the British aircraft gave a demonstration flight over Atlantic City, Philadelphia, Baltimore and Washington, taking off from Andrews Field at 0915. Thirty newsmen went on this flight. From 1300 to 1500 Saturday afternoon the public was invited to an open house here. Royal Air Force crews stood by their Lancasters and answered questions concerning their equipment. During the late afternoon and evening Andrews Field held a gala beach party at Chesapeake Beach for all enlisted visiting RAF personnel and for Andrews Field enlisted and civilian personnel. Swimming, a picnic supper, and dancing were the main features of the day. On Saturday night a buffet dinner and dances were held at the Officers’ Club for all RAF and Andrews Field officers.
Forty Air Attaches visited the Base Sunday morning at the invitation of Headquarters AAF. British service women and other members of the British Colony in Washington were also guests here Sunday afternoon. In the evening the RAF personnel attended the AAF band concert given on the Capitol steps.
During the course of their stay in Washington our English guests also went on sight-seeing tours as well as visiting Bolling Field and attending dinner parties and other social functions.
The itinerary of No. 35 Squadron since it arrived at Mitchell Field July 17 from Graveley, Huntingdon, England, via Azorea and Newfoundland, has been St. Louis, Denver, Los Angeles, San Antonio, Tex., and Andrews Field.
The squadron is now headed for Westover Field, Chicopee Falls, Mass., where it will remain for four days before completing the cycle back to Mitchel Field. From there they will return to England, where most of the men will await their well-earned dis-discharges [Sic].

[photograph]
Group Captain K.C.M Collard is pictured above shaking hands with Col. Curtis D. Sluman, Base Commander, at ceremonies welcoming the RAF to Andrews Field. To the left of him is Lord Inverchapel, British Ambassador; to his right are Gen. Carl A. Spaatz, Chief of Staff of the Army Air Forces, and Col. A.L. Berry, Deputy Base Commander.
[photograph]
In picture above, men of the RAF’s famous 35th Squadron are shown lined up in front of a group of heavy Lancaster bombers during Andrews Field reception for the Royal Air Force.

FLY-PAST
Five South Londoners will have an aerial view of the procession when they take part in the RAF fly-past.
One of them is 23-year-old F/O Frank Baker of Glengarry-rd., Dulwich, navigator in a Mosquito night intruder who won the DFC for a night operation over German airfields.
Three of the others are from heavy bombers, F.O Brundritt. Of Lynton-rd., Bermondsey, will be navigator of a Lancaster. W/O A.J. Pearce, of 70, Whitworth House, Falmouth-rd., Southwark, who won the DFM in 1945, and Flight Sgt. B. Ford, of 5, Arlingford-rd., Tulse Hill, will be rear gunners in Lancasters, W/O S. Pritchard, of 5, Montford-place, Kennington, will be a navigator in 248 Mosquito squadron.