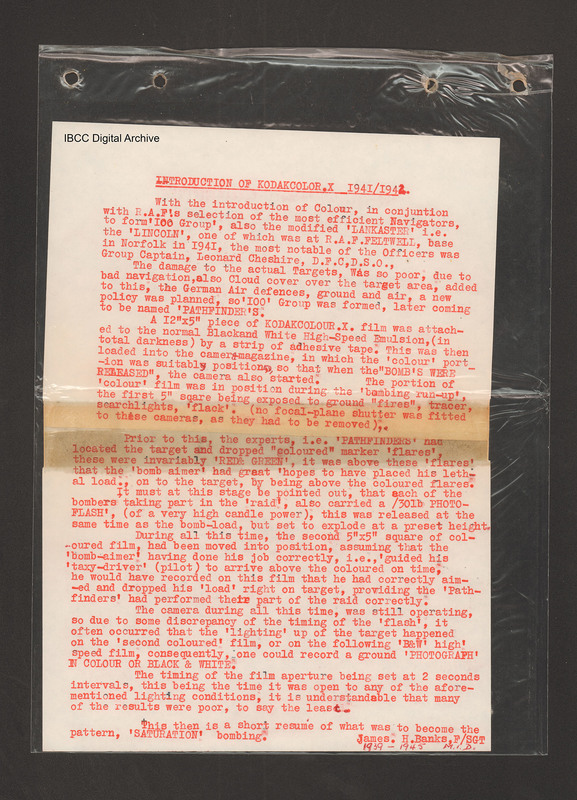 Account of problems of accurate bombing, introduction of pathfinders and use of marker flares. Relates use of cameras and photo-flash to obtain aiming point pictures. Goes on to talk on the introduction of colour film by attaching pieces colour film to the emulsion of normal film to give alternating colour and black and white images. Relates problem of synchronising camera operation and flash. Signed James H Banks F/Sgt 1939-1945.

With the introduction of Colour, in conjunction with R.A.F.’s selection of the most efficient Navigators, to form ‘100 Group’, also the modified ‘LANKASTER’ [sic] i.e. the ‘LINCOLN’, one of which was at R.A.F. FELTWELL, base in Norfolk in 1941, the most notable of the Officers was Group Captain, Leonard Cheshire, D.F.C, D.D.O.,

The damage to the actual Targets, Was so poor, due to bad navigation, also Cloud cover over the target area, added to this, the German Air defences, ground and air, a new policy was planned, so ‘100’ Group was formed, later coming to be named ‘PATHFINDER’S.

A 12” x 5” piece of KODAKCOLOUR. X. film was attached to the normal Black and White High-Speed Emulsion, (in total darkness) by a strip of adhesive tape. This was then loaded into the camera magazine, in which the ‘colour’ portion was suitably positiond, [sic] so that when the “BOMB’S WERE RELEASED”, the camera also started. The portion of ‘colour’ film was in position during the ‘bombing run-up’, the first 5” sqare [sic] being exposed to ground “fires”, tracer, searchlights, ‘flack’. (no focal-plane shutter was fitted to these cameras, as they had to be removed),.

Prior to this, the experts, i.e. ‘PATHFINDERS’ had located the target and dropped “coloured” marker ‘flares’, these were invariably ‘RED & GREEN’, it was above these ‘flares’ that the ‘bomb aimer’ had great ‘hopes to have placed his lethal load., on to [sic] the target, by being above the coloured flares.

It must at this stage be pointed out, that each of the bombers taking part in the ‘raid’, also carried a /30lb PHOTOFLASH’, (of a very high candle power), this was released at the same time as the bomb-load, but set to explode at a preset height.

During all this time, the second 5” x 5” square of coloured film, had been moved into position, assuming that the ‘bomb-aimer’ having done his job correctly, i.e., ‘guided his ‘taxy-driver’ [sic] (pilot) to arrive above the coloured on time, he would have recorded on this film that he had correctly aimed and dropped his ‘load’ right on target, providing the ‘Pathfinders’ had performed their part of the raid correctly.

The camera during all this time, was still operating, so due to some discrepancy of the timing of the ‘flash’, it often occurred that the ‘lighting’ up of the target happened on the ‘second coloured’ film, or on the following ‘B&W’ high’ speed film, consequently, one could record a ground ‘PHOTOGRAPH’ IN COLOUR OR BLACK & WHITE.

The timing of the film aperture being set at 2 seconds intervals, this being the time it was open to any of the aforementioned lighting conditions, it is understandable that many of the results were poor, to say the least.