What a place to be, whilst there was a war on 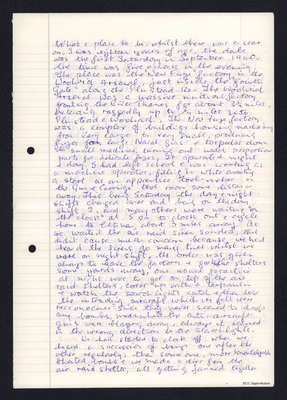 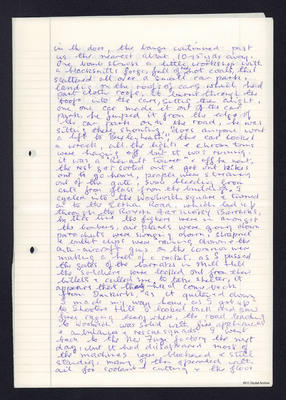 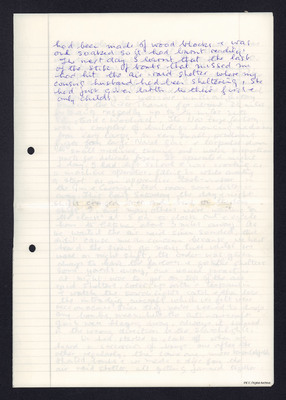 What a place to be, whilst there was a war on

Ted Neale's account of when he was 18 at the Woolwich Arsenal. He tells of a bombing attack at the factory, which started just as they were leaving at 5pm.

What a place to be, whilst there was a war on. I was eighteen years of age, the date was the first Saturday in September 1940. the time was five o’clock in the evening, The place was the ‘New Fuze” factory in the Woolwich Arsenal, just inside the “fourth Gate” along the Plumstead Rd. The Woolwich Arsenal was a massive munitions factory fronting the River Thames for about 3 1/2 miles, extending raggedly up to 3/4 miles into Plumstead & Woolwich. In the New Fuze factory was a complex of buildings housing machines from very large to very small, producing fuzes for large Naval guns & torpedos down to small machines, turning out watch proportioned parts for delicate fuzes. It operated night & day. I had left school & was working as a machine operator, filling in while awaiting a start as an apprentice tool-maker in the Gun & Carriage tool room some distance away. This being Saturday the day & night shifts changed over and being on the day shift I, and many others were waiting “on the clock” at 5pm to clock out & cycle home to Eltham, about 3 miles away. As we waited the air raid siren sounded, this didn’t cause much concern because we had heard the sirens go many times whilst we were on night shift, the order was given always to leave the factory & go to the shelters some yards away, our usual practice at night was to get on top of the air raid shelters, cover up with a tarpaulin & watch the search lights catch & then lose the intruding aircraft which we felt were recconocence [sic]? since they never seemed to drop any bombs, meanwhile the anti-aircraft guns were blazing away, always it seemed in the wrong direction to the searchlights.

We had started to clock off when we heard a succession of bangs one after the other regularly, then someone, more knowledgeable shouted bombs & we made a dive for the air raid shelter, all getting jammed together

in the door, the bangs continued past us the nearest about 10 – 15 yards away. One bomb struck a little workshop with a blacksmiths forge, full of [inserted] red [/inserted] hot coals, this scattered all over a small car park, landing on the roofs of cars which had part cloth roofs, it burnt through the roofs into the cars, setting them alight, one one car made it from the edge of the car park on to the road, he jumped it from the edge of the car park on to the road, he was sitting there shouting, “does anyone want a lift to Bexleyheath”, the car looked a wreck, all the lights & chrome trims were hanging off but it was running. it was a “Renault tourer” & off he went, the rest got sorted out & got our bikes to go home, people were streaming out of the gate, some bleeding from cuts from glass from the buildings. I cycled into the Woolwich square & turned on to the Eltham Road, which led up through the ROYAL ARTILLERY Barracks, by this time the fighters were in amongst the bombers, air planes were going down parachutes were swinging down, shrapnel & bullet clips were raining down & the anti-aircraft guns on the common were making a hell of a racket, as I passed the gates of the barracks in Mill Hill the soldiers were looked out from their billets & called me to take shelter, it appears that they had come back from Dunkirk, as it quietened down I made my way home, as I got up to Shooters Hill I looked back and saw fires raging everywhere, the road leading to Woolwich was solid with fire appliances & ambulances & rescue squads. I went back to the New Fuze factory the next day, but it had disappeared most of the machines were blackened and still standing, many of them operated with oil for coolant & cutting & the floor

had been made of wood blocks & was oil soaked so it had burnt readily. The next day I learnt that the last of the stick of bombs that missed me had hit the air-raid shelter where my cousins husband had been sheltering, she had just given birth to their first & only child!

Ted Neale, “What a place to be, whilst there was a war on,” IBCC Digital Archive, accessed January 29, 2023, https://ibccdigitalarchive.lincoln.ac.uk/omeka/collections/document/16331.