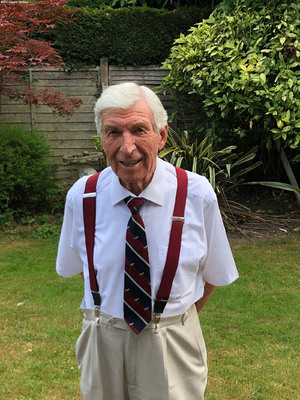 Edward served on 90 Squadron as a rear gunner. Born in 1925 on the Isle of Sheppey, he was employed as a butcher’s boy at the outbreak of the war. Evenings were spent fire watching, for which he received a small wage from the council. He became a member of the Air Training Corps and enlisted in the RAF on his eighteenth birthday. Edward chose to be a rear gunner because the path to being operational was approximately half the time to that of a pilot or navigator. After initial training, he was posted to the Air Gunnery School in South Wales. He recalls using inferior ammunition from the First World War and watching the bullets cartwheel towards the targets. Despite this handicap, Edward qualified and progressed through to operational training. Whilst in Suffolk, the mid-upper gunner, Ken Bird, purchased a motorcycle but unfortunately did not obtain any petrol coupons. Edward tells how they relied on the generosity of passing Americans to keep them mobile. Finally, his crew qualified and were posted onto the Lancasters of 90 Squadron. His first operation was with another crew covering for a sick gunner. In total he flew thirty-two operations, supporting the advancing ground forces and attacking the supply lines of the retreating German army. Although they were not attacked directly, they were hit by anti-aircraft fire on one occasion. Both the tail and main plane were hit, leaving holes big enough to put your head in, and a piece of shrapnel passed through his turret fortunately missing him. Following the completion of his operational tour, Edward spent the remainder of his service career on ground tours, finally being demobbed in 1947.