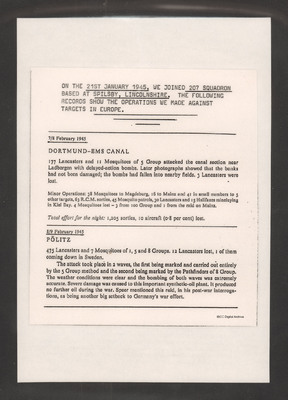 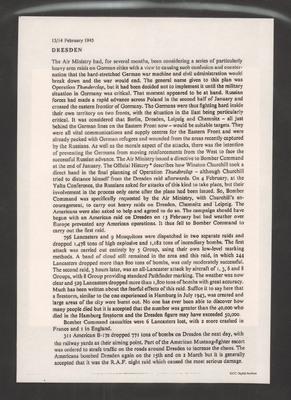 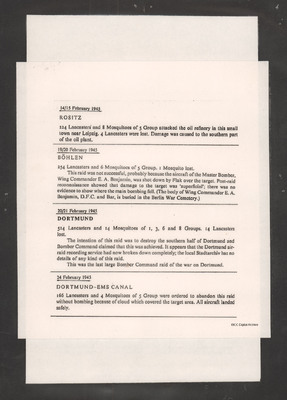 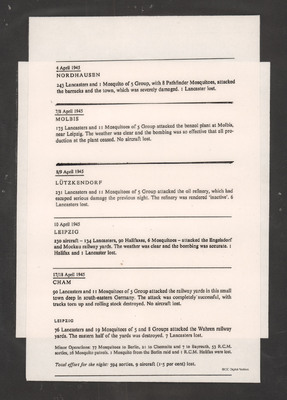 An account of 207 Squadron operations undertaken by Malcolm Staves whilst at RAF Spilsby.

[underlined] 7/8 February 1945 [/underlined]
DORTMUND –EMS CANAL
177 Lancasters and 11 Mosquitoes of 5 Group attacked the canal section neat Ladbergen with delayed-action bombs. Later photographs showed that the banks had not been damaged; the bombs had fallen into nearby fields. 3 Lancaster were lost.

Minor Operations: 38 Mosquitoes to Magdeburg, 16 to Mainz and 41 in small numbers to 5 other targets, 63 R.C.M. sorties, 45 Mosquito patrols, 30 Lancasters and 15 Hailifaxes minelaying in Kiel Bay, 4 Mosquitoes lost – 3 from 100 Group and 1 from the raid on Mainz.

[underlined] 8/9 February 1945 [/underlined]
PÖLITZ
475 Lancasters and 7 Mosquitoes of 1, 5 and 8 Groups. 12 Lancasters lost, 1 of them coming down in Sweden.
The attack took place in 2 waves, the first being marked and carries out entirely by the 5 Group method and the second wave being marked by the Pathfinders of 8 Group. The weather conditions were clear and the bombing of both waves was extremely accurate. Severe damage was caused to this important synthetic-oil plant. It produced no further oil during the war. Speer mentioned this raid, in his post-war interrogations, as being another big setback to Germany’s war effort.

13/14 February 1945
DESDEN
The Air Ministry had, for several months, been considering a series of particularly heavy area raids on German cities with a view to causing such confusion and consternation that the hard-stretched German war machine and civil administration would break down and the war would end. The general name given to this plan was Operation Thunderclap, but it has been decided not to implement it until the military situation on German was critical. That moment appeared to be at hand. Russian forces had made rapid advances across Poland in the second half of January and crossed the eastern frontier of Germany. The Germans were thus fighting hard inside their own territory on two fronts, with the situation in the East being particularly critical. It was considered that Berlin, Dresden, Leipzig and Chemnitz – all just behind the German lines on the Eastern Front bow – would be suitable targets. They were all vital communications and supply centres for the Eastern Front and were already packed with German refugees and wounded from the areas recently captured by the Russians. As well as the morale aspect of the attacks, there was the intention of preventing the German from moving reinforcements from the West to face the successful Russian advance. The Air Ministry issued a directive to Bomber Command at the end of January. The Official History* describes how Winston Churchill took a direct hand in the final planning of Operation Thunderclap – although Churchill tried to distance himself from the Dresden raid afterwards. On 4 February, at the Yalta Conference, the Russians asked for the attacks of this kind to take place, but their involvement in the process only came after the plans had been issued. So, Bomber Command was specifically requested by the Air Ministry, with Churchill’s encouragement, to carry out heavy raids on Dresden, Chemnitz and Leipzig. The Americans were also asked to help out and agreed to do so. The campaign should have begun with an American raid on Dresden on 13 February but bad weather over Europe prevented any American operations. It thus fell to Bomber Command to carry out the first raid.
796 Lancasters and 9 Mosquitoes were dispatched in two separate raids and dropped 1,478 tons of high explosive and 1,1,82 tons of incendiary bombs. The first attack was carried out entirely by 5 Group, using their own low-level marking methods. A band of cloud still remained in the area and this raid, on which 244 Lancasters dropped more than 800 tons of bombs, was only moderately successful. The second raid, 3 hours later, was an all-Lancaster attack by aircraft of 1,3, 6 and 8 Groups, with 8 Group providing standard Pathfinder marking. The weather was now clear and 529 Lancasters dropped more than 1,800 tons of bombs with great accuracy. Much had been written about the fearful effects of this raid. Suffice to say here that a firestorm, similar to the one experienced in Hamburg in July 1943, was created and large areas of the city were burnt out. No one has ever been able to discover how many people died but it is accepted that the number was greater than the 40,000 who died in the Hamburg firestorm and the Dresden figure may have exceeded 50,000.
Bomber Command casualties were 6 Lancasters lost, with 2 more crashed in France and 1 in England.
311 American B-17s dropped 771 tons of bombs on Dresden the next day, with the railway yards as their aiming point. Part of the American Mustang-fighter escort was ordered to strafe traffic on the roads around Dresden to increase the chaos. The Americans bombed Dresden again on the 15th and on 2 March but it is generally accepted that is was the R.A.F. night raids which caused the most serious damage.

[underlined] 14/15 February 1945 [/underlined]
ROSITZ
244 Lancasters and 8 Mosquitoes of 5 Group attacked the oil refinery in this small town near Leipzig. 4 Lancaster were lost. Damage was caused to the southern part of the oil plant.

[Underlined]19/20 February 1945 [/underlined]
BÖHLEN
254 Lancasters and 6 Mosquitoes of 5 Group. 1 Mosquito lost.
This raid was not successful, probably because the aircraft of the Master Bomber Wing Commander E.A. Benjamin was shot down by Flak over the target. Post-raid reconnaissance showed that damage to the target was ‘superficial’ there was no evidence to show where the main bombing fell. (The body of Wing Commander E.A. Benjamin, D.F.C. and Bar is buried in the Berlin War Cemetery)

[underlined] 20/21 February 1945 [/underlined]
DORTMUND
415 Lancasters and 14 Mosquitoes of 1, 3, 6 and 8 Groups. 14 Lancasters lost.
The intention of this raid was to destroy the southern half of Dortmund and Bomber Command claimed that this was achieved. It appeared that the Dortmund air raid recording service had now broken down completely; the local Stadtarchiv has no details of any king of this raid.
This was the last large Bomber Command raid of the war on Dortmund.

[underlined] 24 February 1945 [/underlined]
DORTMUND –EMS CANAL
166 Lancaster and 4 Mosquitoes of 5 Group were ordered to abandon this raid without bombing because of cloud which covered the target area. All aircraft landed safely.

[underlined] 4 April 1945 [/underlined]
NORDHAUSEN
243 Lancasters and 1 Mosquito of 5 Group, with 8 Pathfinder Mosquitoes, attacked the barracks and the town, which was severely damaged. 1 Lancaster lost.

[underlined] 7/8 April 1945 [/underlined]
MOLBIS
175 Lancaster and 11 Mosquitoes of 5 Group attacked the benzol plant at Molbis, near Leipzig. The weather was clear and the bombing so effective that all production at the plant ceased. No aircraft lost.

[underlined] 17/18 April 1945 [/underlined]
CHAM
90 Lancasters and 11 Mosquitoes of 5 Group attacked the railway yards in this small town deep in south-eastern Germany. The attack was completely successful, with tracks torn up and rolling stock destroyed. No aircraft lost.

LEIPZIG
76 Lancasters and 19 Mosquitoes of 5 and 8 Groups attacked the Wahren railway yards. The eastern half of the yards was destroyed. 7 Lancasters lost.

Minor operations: 77 Mosquitoes to Berlin, 21 to Chemnitz and 7 to Bayreuth, 53 R.C.M. sorties, 26 Mosquitoes patrols. 1 Mosquito from the Berlin raid and 1 R.C.M. Halifax were lost.