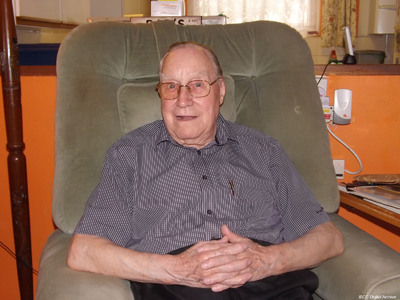 Peter was born on the 7th of January 1925, in West Hampstead, London. He worked in a jewellers in Hammersmith and left his job to join the air cadets at RAF Hendon from 1941 to 1943. On his eighteenth birthday, he joined the RAF to begin training as an air gunner, this took him to RAF Dalcross, Scotland, where he completed his training in July 1943. On arriving home on leave, he found his family home damaged after a German bombing attack. In December 1943, Peter trained on Wellingtons and Stirlings at No.11 Operational Training Unit, RAF Westcott, where he was picked to join 75 Squadron, as a mid-upper gunner by Sergeant Donald George ‘Hoot’ Gibson. After flying Stirlings for his first month, the crew trained for Lancasters at 1651 Conversion Unit, 75 Squadron then moved to RAF Mepal, and in April 1944 they converted to Lancasters. Peter completed thirty-one operations with 75 Squadron. In August, he returned to RAF Dalcross, to fly in Martinets which towed targets for aircraft practice. After taking a short break, he joined 98 Squadron in March 1945, and flew B-25’s as a rear gunner until VE Day. He took part in gardening operations, which involved low flying to drop sea mines on estuaries in France to prevent U-Boat attacks. Towards the end of the war, Peter shot down a Ju 88, after it came too close, his only claimed kill of the war. Peter continued his flying career with the RAF post-war, as an air gunner with Lincolns, Lancasters, and Shakletons, and then joined coastal command at RAF Benbecula until he retired in 1956. In the 1960s, Peter moved to Singapore to be an instructor, married in 1962, but his wife passed away in 1969 and he remarried a few years later.