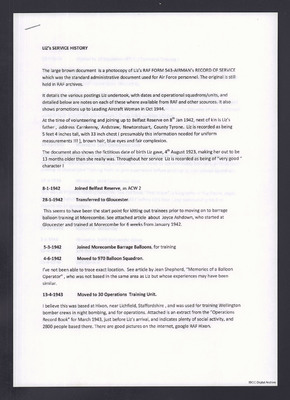 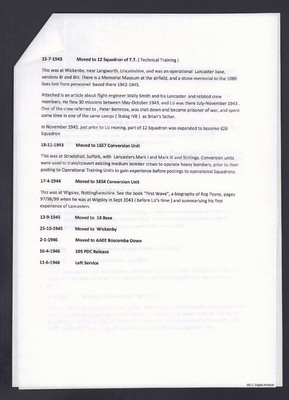 The large brown document is a photocopy of Liz’s RAF FORM 543-AIRMAN’s RECORD OF SERVICE which was the standard administrative document used for Air Force personnel. The original is still held in RAF archives.
It details the various postings Liz undertook, with dates and operational squadrons/units, and detailed below are notes on each of these where available from RAF and other sources. It also shows promotions up to Leading Aircraft Woman in Oct 1944.
At the time of volunteering and joining up to Belfast Reserve on 8th Jan 1942, next of kin is Liz’s father, address Carnkenny, Ardstraw, Newtonstuart, County Tyrone. Liz is recorded as being 5 feet 4 inches tall, with 33 inch chest (presumably this information needed for uniform measurements!!!), brown hair, blue eyes and fair complexion.
The document also shows the fictitious date of birth Liz gave, 4th August 1923, making her out to be 13 months older than she really was. Throughout her service Liz is recorded as being of “very good” character!

This seems to have been the start point for kitting out trainees prior to moving on to barrage balloon training at Morecombe. See attached article about Joyce Ashdown, who started at Gloucester and trained at Morecombe for 6 weeks from January 1942.

I’ve not been able to trace exact location. See article by Jean Shepherd, “Memories of a Balloon Operator”, who was not based in the same area as Liz but whose experiences may have been similar.

I believe this was based at Hixon, near Lichfield, Staffordshire, and was used for training Wellington bomber crews in night bombing, and for operations. Attached is an extract from the “Operations Record Book” for March 1943, just before Liz’s arrival, and indicates plenty of social activity, and 2800 people based there. There are good pictures on the internet, google RAF Hixon.

This was at Wickenby, near Langworth, Lincolnshire, and was an operational Lancaster base, versions BI and BIII. There is a Memorial Museum at the airfield, and a stone memorial to the 1080 lives lost from personnel based there 1942-1945.
Attached is an article about flight engineer Wally Smith and his Lancaster and related crew members. He flew 30 missions between May-October 1943, and Liz was there July-November 1943. One of the crew referred to, Peter Bemrose, was shot down and became a prisoner of war, and spent some time in one of the same camps (Stalag IVB) as Brian’s father.
In November 1943, just prior to Liz moving, part of 12 Squadron was expanded to become 626 Squadron.

This was at Stradishall, Suffolk, with Lancasters Mark I and Mark III and Stirlings. Conversion units were used to train/convert existing medium bomber crews to operate heavy bombers, prior to their posting to Operational Training Units to gain experience before postings to operational Squadrons.

This was at Wigsley, Nottinghamshire. See the book “First Wave”, a biography of Reg Payne, pages 97/98/99 when he was at Wigsley in Sept 1943 (before Liz’s time) and summarising his first experience of Lancasters.