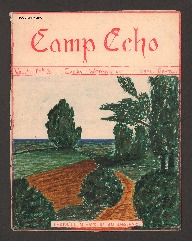 An edition of Laghouat Internment camp weekly magazine with many articles covering a wide range of topics.