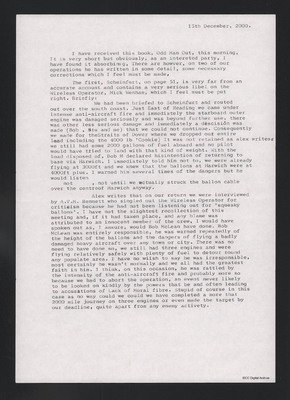 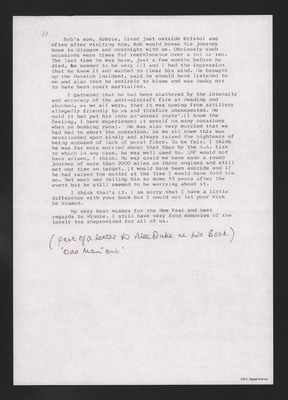 In the letter he refers to an operation to Schweinfurt described in the book. They received damage over Reading from 'friendly' anti-aircraft fire. They jettisoned the bomb load in the Channel then headed home via Harwich at 3000'. Despite warning the pilot he overflew the town and struck a balloon. In the book the wireless operator, Mick Wenham was blamed but the letter explains it was the pilot's decision. It was the author's opinion that the anti-aircraft fire had traumatised the pilot, Bob McLean. He was also concerned that turning back would lead to a charge of Lack Moral Fibre despite the impossibility of continuing for 2000 miles on three engines.

I have received this book, Odd Man Out, this morning, It is very short but obviously, as an intereted [sic] party, I have found it absorbing, There are howver [sic], on two of our operations he has written in some details, some necessary corrections which I feel must be made,

The first, Scheinfurt, on page 51, is very far from an accurate account and contains a very serious libel on the Wireless Operator, Mick Wenham, which I feel must be put right. Briefly:
We had been briefed to Scheinfurt and routed out over the south coast. Just East of Reading we came under intense anti-aircraft fire and immediately the starboard outer engine was damaged seriously and was beyond further use. There was other less serious damage and immediately a descision [sic] was made (Bob, Stu and me) that we could not continue. Consequently we made for the Straits of Dover where we dropped our entire load including the 4000 lb ‘Cookie) It was not retained as alex [sic] writes, we still had some 2000 gallons of fuel aboard and no pilot would have tried to land with that kind of weight. With the load disposed of, Bob M declared his intention of returning to base via Harwich. I immediately told him not to, we were already flying at 3000ft and we knew that the ballons [sic] at Harwich were at 4000ft plus. I warned him several times of the dangers but he would [inserted] not [/inserted] listen, not until we actually struck the ballon [sic] cable over the centre of Harwich anyway.

Alex writes that on our return we were interviewed by A.V.M. Bennett who singled out the Wireless Operator for critisism[sic] because he had not been listening out for ‘squeaky ballons[sic ]’. I have not the slightest recollection of this meeting and, if it had taken place, and any blame was attributed to an innocent member of the crew, I would have spoken out as, I am sure, would Bob McLean have done. Bob McLean was entirely responsible, he was warned repeatedly of the height of the ballons[sic] and the dangers of flying a badly damaged heavy aircraft over and town or city. There was no need to have done so, we still had three engines and were flying relatively safely with plenty of fuel to detour round any populate[sic] area. I have no wiish[sic] to say he was irresponsible, most certainly he wasn’t mormally [sic] and we all had the greatest faith in him. I think, on this occasion, he was rattled by the intensity of the anti-aircraft fire and probably more so because we had to abort the operation, an event never likely to be looked on kindly by the powers that be and often leading to accusations of Lack of Moral Fibre. Stupid of course in this case as no way could we could we [sic] have completed a more that [than] 2000 mile journey on three engines or even made the target by our deadline, quite apart from any enemy activety [sic].

[page break]
//
Bob’s son, Robbie, lived just outside Bristol and often after visiting him, Bob would break his journey home to Glasgow and overnight with us. Obviously such occasions were times for reminiscence over a tot or two. The last time he was here, just a few months before he died, he seemed to be very ill and I had the impression that he knew it and wanted to clear his mind. He brought up the Harwich incident, said he should have listened to me and also that he entirely to blame and was lucky not to have been court martialled.

I gathered that he had been shattered by the intensity and accuracy of the anti-aircraft fire at Reading and shocked, as we all were, that it was coming from artillery allegedly friendly to us and threfore[sic] unexxpected.[sic] He said it had put him into an ‘unreal state’. (I know the feeling, I have experienced it myself on many occasions when on bombing runs). He was also very worried that we had had to abort the operation. As we all knew this was never looked upon kindly and always raised the nightmare of being accused of lack of moral fibre. To be fair, I think he was far more worried about that than by the A.A. fire to which in any case, he was well used to. LMF would not have arisen, I think. No way could we have made a round journey of more than 2000 miles on three engines and still met our time on target. It would have been suicide and if he had raised the matter at the time I would have told him so. Not much use telling him so some 53 years after the event but he still seemed to be worrying about it.

I think that’s it. I am sorry that I have a little difference with your book but I could not let poor Mick be blamed.

My very best wishes for the New Year and best regards to Winnie. I still have very fond memories of the lovely tea sheprovided[sic] for all of us.