56 items. The collection concerns Major Ernest Gordon Appleford Lett, DSO (1910-1989, 50112), a British Army officer and partisan leader in Italy. He was taken prisoner after the fall of Tobruk and detained in different camps in Italy. After the September 1943 armistice, rather than re-joining Allied forces, he took to the mountains and established contacts with Resistance forces active in the Apennines between Liguria and Toscana. Lett founded and led the Battaglione Internazionale, a multinational unit that successfully engaged Black Brigades and German units. Later, when reliable lines of communication were secured, supplies were dropped by air and the Battaglione was supplemented by Special Operations Executive personnel. Gordon Lett was relieved by Major John Henderson in March 1945. After the war, Lett was awarded the DSO and received the Medaglia Argento al valor militare.

The collection consists of a selection of Gordon Lett's papers and official correspondence with key figures of the local Resistance movement. They include Colonnello Mario Fontana (‘Cossu’, or ‘Turchi’), Comandante Luciano Scotti (‘Vittorio’ or ‘Gonzaga’), Commissario Politico Anselmo Corsini ('Ambrosio', or ‘Max’) and Mario Fortelli, a lawyer acting as liaison officer with the local Allied Military Mission.

Documents consist of military assessments, notes on air drops, a ciphers book, a draft of a radio message sent via clandestine radio operators, and a request for tactical bombing. The collection contains notes on an aircraft crash, the military funeral and the subsequent burial of the aircrew. A specific subset includes correspondence, plans and reports about the construction of an improvised landing strip for Allied aircraft operating behind enemy lines.

All documents were deposited at the La Spezia City Council and then re-housed in 1972 at the Istituto spezzino per la Storia della Resistenza e dell’Età Contemporanea, where they have been preserved ever since. The selection published here has been curated by Tiziano Vernazza. 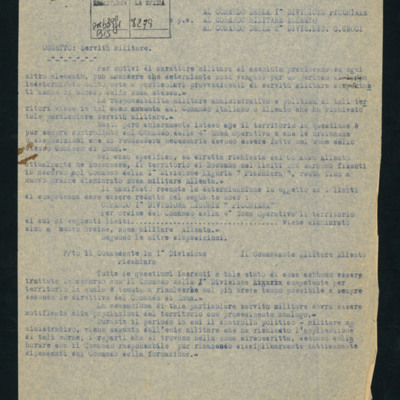 Order establishing a military operations area. Includes the template of an official notice. 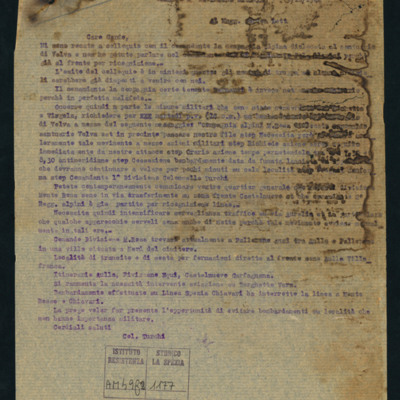 Report from Colonnello Mario Fontana to Major Gordon Lett with a military assessment of the Liguria region detailing the positions of enemy units. Requests aerial bombings to support partisan forces in action. 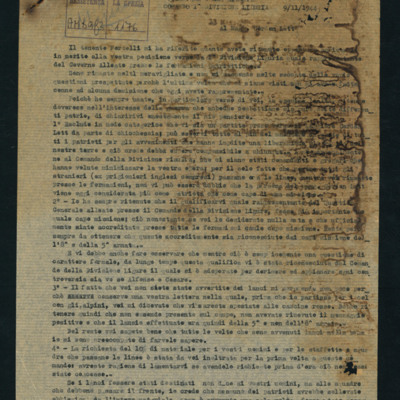 Report from Colonel Mario Fontana to Major Gordon Lett stressing the need of a closer cooperation among different forces operating in the area. Discusses allocation of air drops.

Foreign partisans fighting with the Resistance in Liguria 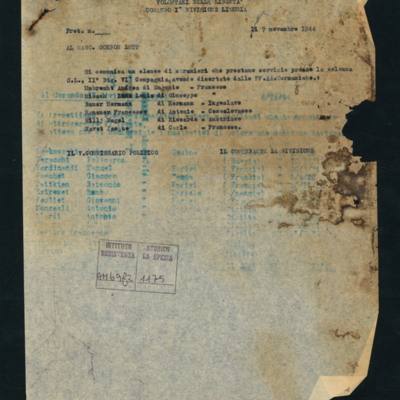 Note to Major Gordon Lett regarding French, Yugoslav, Czechoslovak, Austrian, and French personnel who have deserted the German army and have joined the Resistance in Liguria. 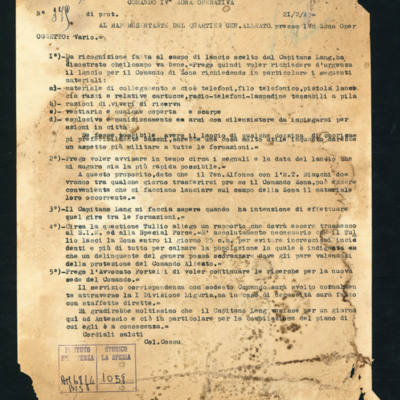 Report from Colonnello Mario Fontana to Major Gordon Lett regarding equipment needed for the partisan units, to be delivered by air drops. The list includes silencers for actions in urban areas, explosives, ammunition and items of clothing. 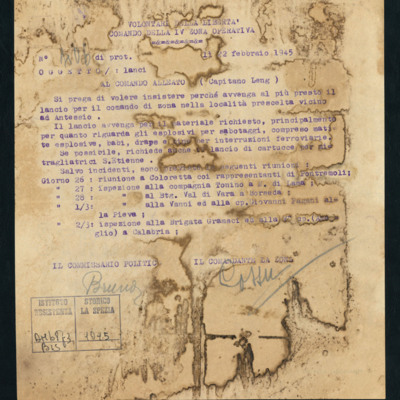 Equipment handed out by British servicemen to Italian partisans 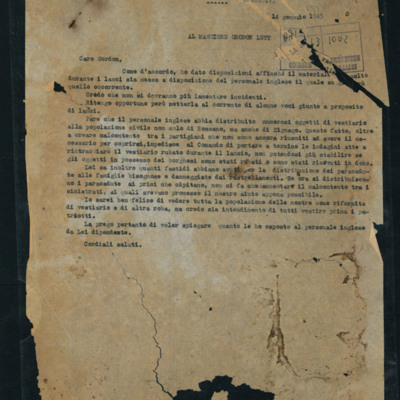 Colonnello Mario Fontana reports to Major Gordon Lett about air drops and various pieces of equipment handed out by British servicemen to Italian partisans. Complains about the situation, stressing that is now impossible to tell apart what has been… 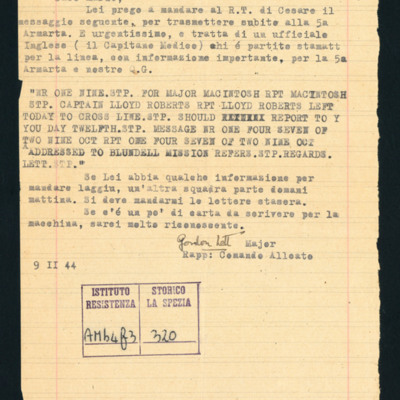 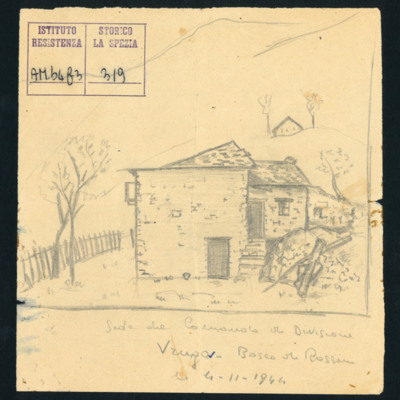 In a mountain landscape, a modest rural building stands on a ground partially encircled by a fence. Some trees are visible, a second building is in the background. Captioned 'Sede del Comando di Divisione Vruga - Bosco di Rossano il 4-11-1944’.

Letter of appreciation for Gordon Lett 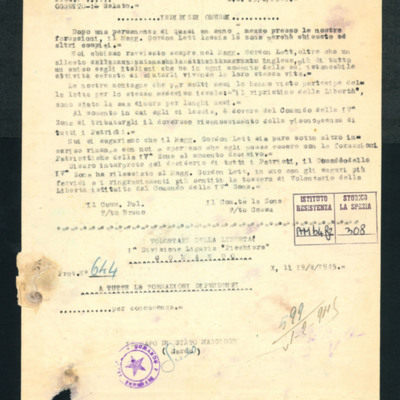 Circular letter announcing that Major Gordon Lett has been posted elsewhere. Thanks him for his service, recaps his achievements and wishes him well.

Expenditure on the construction of the Casoni improvised landing strip 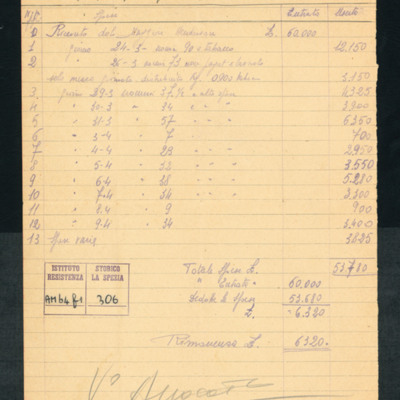 Details the expenditure incurred on the construction of the Casoni improvised air field. Out of the 60,000 Lire budget provided by Major John Henderson, 53,780 Lire was spent. 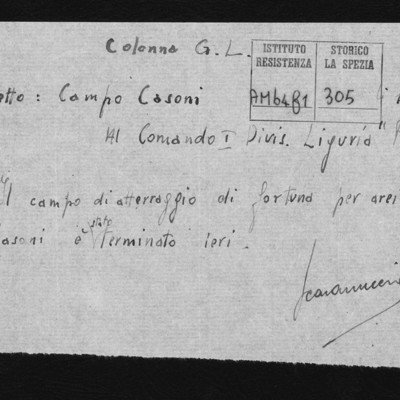 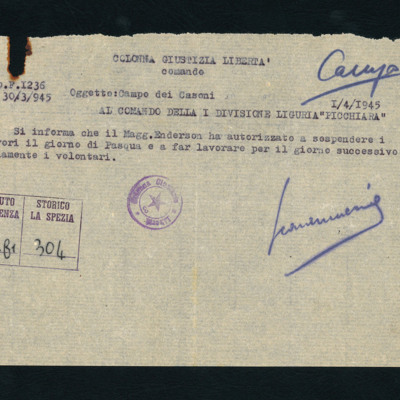 Major John Henderson has authorised the construction works to be suspended over Easter. On the following day only volunteers will be at work. 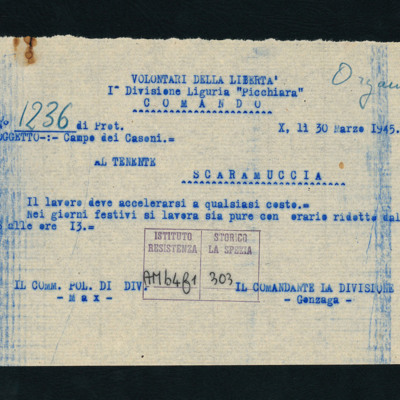 Comandante Luciano Scotti writes to Tenente Scaramuccia regarding the delivery of the Casoni improvised landing strip. The pace of delivery must be increased at any cost, with labourers working from 8am to 1pm on festival days.

Delivery schedule for the improvised landing strip at Casoni 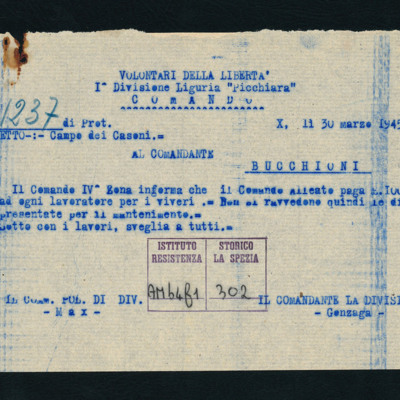 Letter from Comandante Luciano Scotti to Comandante Bucchioni regarding the delivery of the Casoni improvised landing strip. Stresses that complaints regarding scarcity of supplies are wholly unjustified and the Allied Mission pays 100 Lire a day to…

Subsistence for the labourers at Casoni 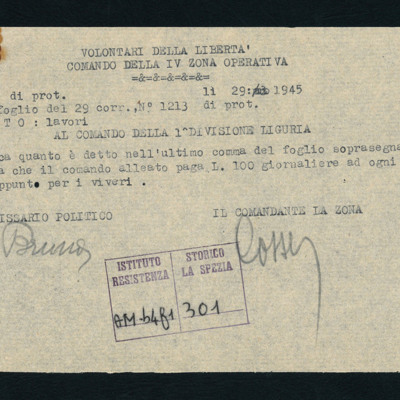 Stresses that the Allied Mission pays 100 Lire a day to each labourer working at the Casoni improvised landing strip. 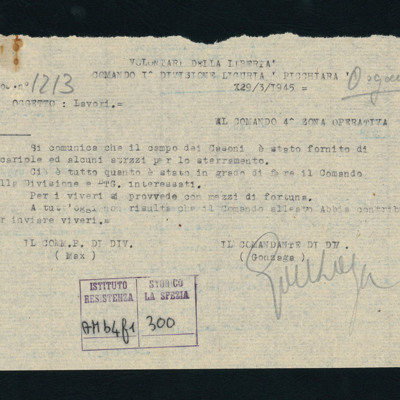 Comandante Luciano Scotti states that works are underway at the Casoni improvised landing strip despite the lack of suitable tools. Claims that the Allied Mission haven't sent supplies. 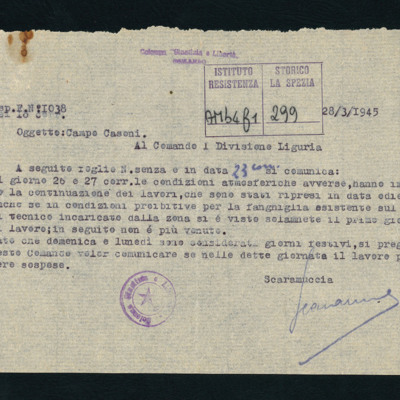 Reports on delays to the construction of the Casoni improvised landing strip: the specialist showed up only on the first day, never to be seen again and work is hampered by mud. Asks permission to suspend the works next Sunday and Monday, being… 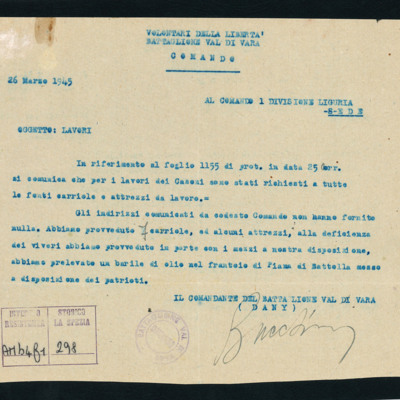 Comandante Dany complains about the lack of suitable tools (eg only seven wheelbarrows are available) and the scarcity of food. A barrel of olive oil has been requisitioned as a temporary measure.

Current state of works at the Casoni improvised landing strip 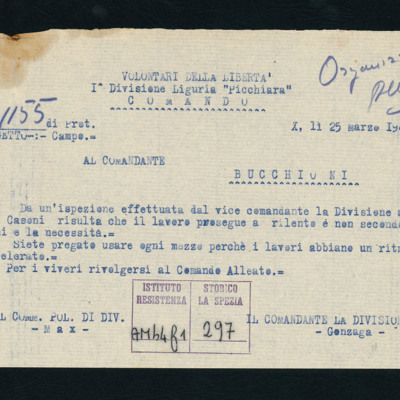 Following an inspection, Comandante Luciano Scotti notes that works are falling behind the schedule and orders that the pace of delivery must increase. Provisions to be supplied by the Allied Mission. 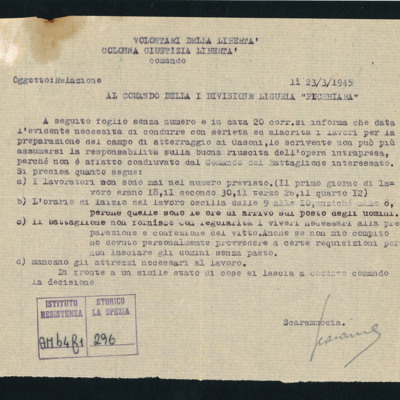 Scaramuccia reports on issues slowing down the delivery pace of the Casoni improvised landing strip: headcount of labourers fluctuates on a day-by-day basis; men show up at irregular hours for work; supplies are not delivered regularly; food has to… 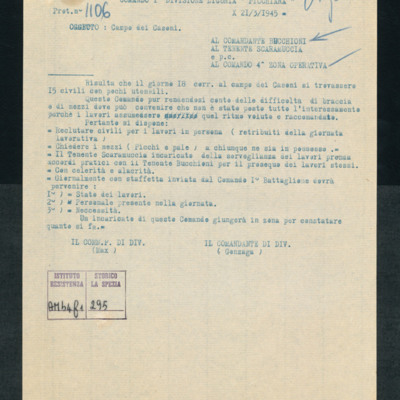 Comandante Luciano Scotti acknowledges that the works are falling behind the schedule and orders countermeasures: civilian labourers are to be recruited individually, tools to be borrowed from whoever may have them, progress to be tracked and…

Start of the construction works at the Casoni improvised landing strip 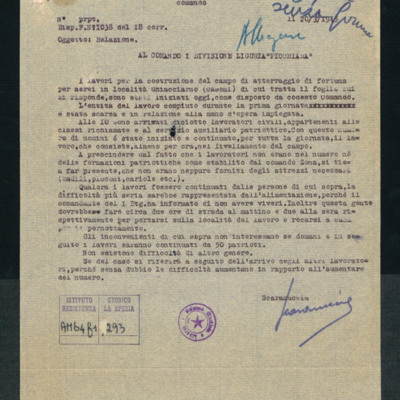 Comandante Scaramuccia states that construction works have started with the first stage consisting of levelling out the ground. Progression is currently hampered by a scarcity of labourers, tools and supplies.

Start of the construction works at the Casoni improvised landing strip 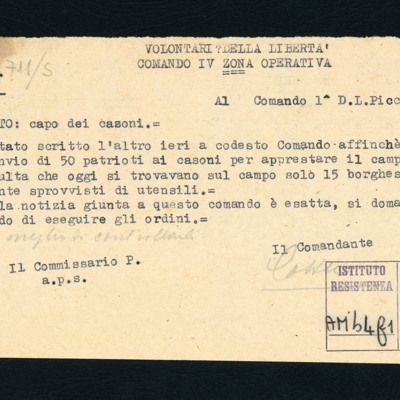 Complains that only 15 civilian labourers showed up, most of them without tools, instead of the 50 partisans expected. No tools are available.

Meeting at the Casoni drop zone 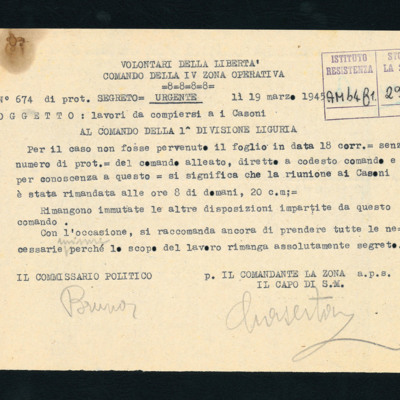 Postpones a meeting regarding the works at the Casoni drop zone and recommends strict secrecy.
View all 56 items