23 items. An oral history interview with Flying Officer Arthur Woolf (1922 - 2021, 1579552, 157533 Royal Air Force) his log book, a memoir, correspondence, documents, a newspaper cutting and photographs. He flew operations as a wireless operator with 630 Squadron and became a member of the Guinea Pig Club.

The collection has been loaned to the IBCC Digital Archive for digitisation by Arthur Woolf and catalogued by Nigel Huckins. 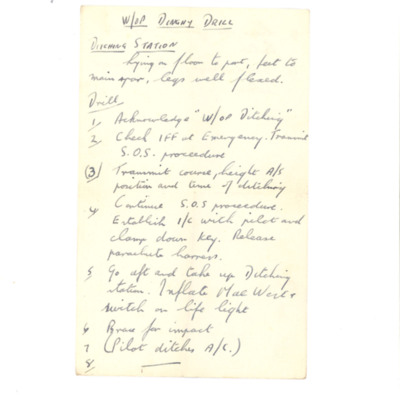 List of instructions for actions on ditching and then leaving aircraft and boarding dinghy. 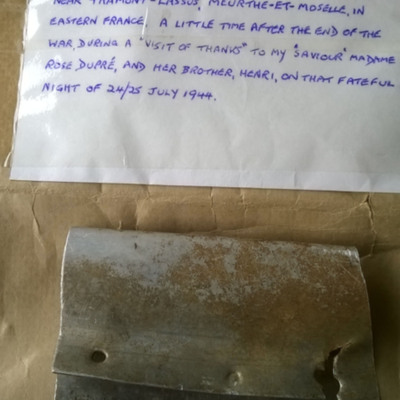 Piece of metal with note that this was a piece of Arthur Woolf's Lancaster retrieved from crash site during visit to a French family who helped him after he baled out. 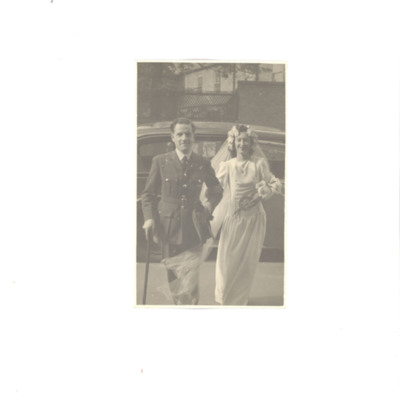 On the left a man wearing uniform tunic with half brevet and holding walking stick arm in arm with a lady on the wearing wedding dress. In the background a car and buildings. Submitted with caption 'Marriage photo Shiela [sic] and Arthur Woolf 29… 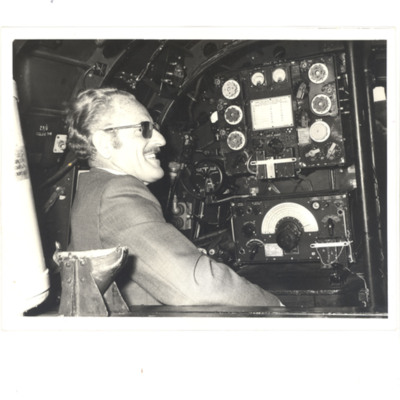 Half length view of a man wearing civilian jacket and glasses sitting in front of an instrument panel inside and aircraft. Submitted with caption 'FO A S WOOLF at W Op station in Lancaster (Kings Flight) 1950s'.

Details non-commissioned service. appointments and promotions and postings with dates for all.

From RAF central depository to Arthur Woolf's father advising that listed personal effects have been dispatched.

Letter from Arthur Woolf to his parents 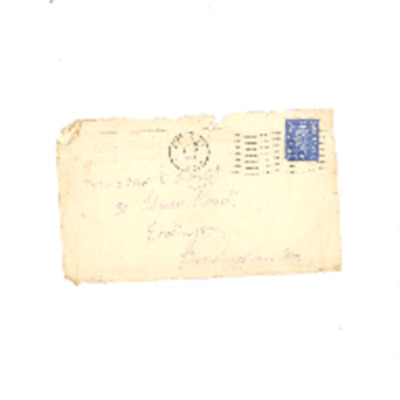 Writes that he is glad to be back in England and to catch up with news. Asks if they received any of his letters from German prisoner of war hospital. Relates his last days as prisoner and liberation by American forces and journey home. Continues…

Telegram from Arthur Woolf to his parents 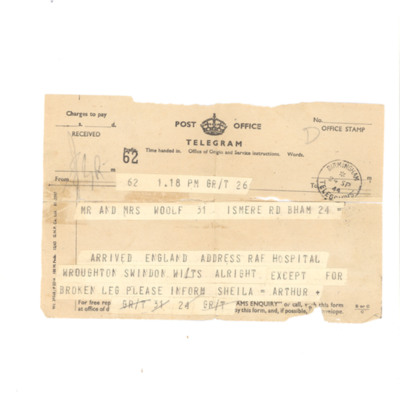 Advises them he had arrived back in England at RAF hospital Wroughton. 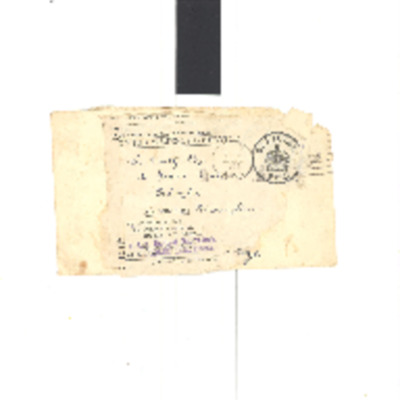 Writes with regret to inform him that his son was missing as a result of air operations on night 24/25 July 1944 when his Lancaster in which he was wireless operator set out to attack Stuttgart. Inquiries were being made through red cross. Asks if he… 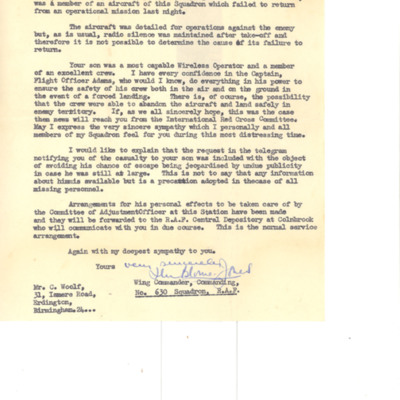 Writes to confirm that his son Arthur was a member of an aircraft of the squadron that failed to return from an operation. Goes on to comment on capability of crew and they may have been able to abandon or forced land the aircraft.

First page has head and shoulders portrait of Arthur Woolf wearing uniform tunic with half brevet, medal ribbons and peaked cap. Next page has badges for Bomber Command, 5 Group and 630 Squadron.

Covers joining the RAF at age 19 and training at… 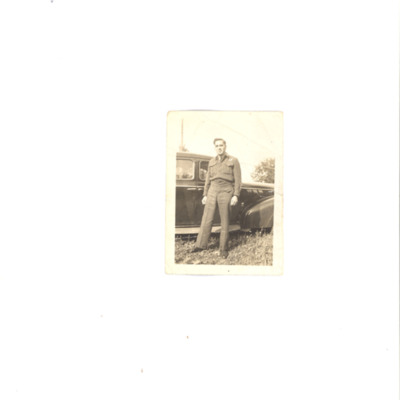 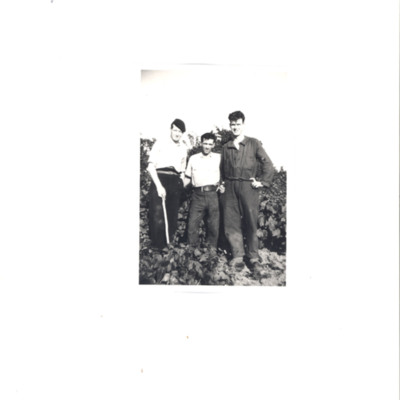 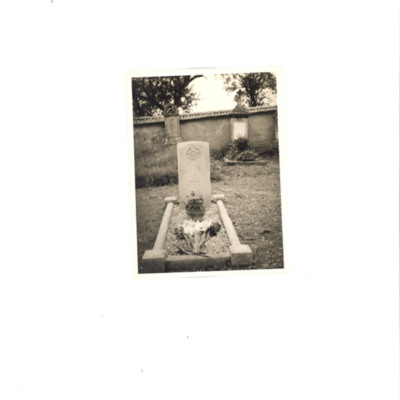 Grave with headstone. In the background a wall and other graves. Submitted with caption 'CWGC Headstone Ross LOUGH Local cemetery @ Tramont Lassus'. 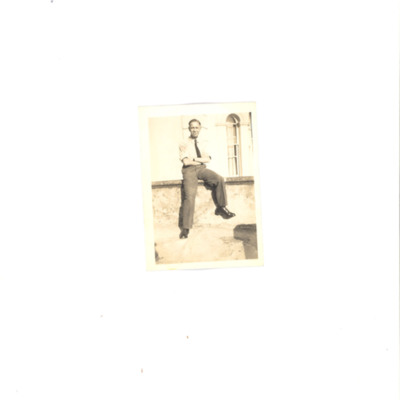 Full length image of a man wearing shirt and tie sitting on a wall with window in the background. Submitted with caption 'Arthur TOOGOOD Navigator 1944'.

Freed by Americans flown back home 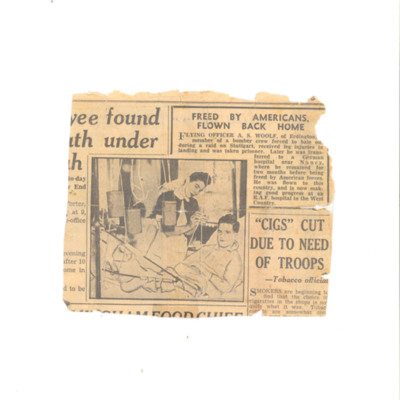 Account of Flying Officer A S Woolf baling out of bomber after an attack on Stuttgart, injured and transferred to German hospital near Nancy he was liberated by American forces and flown home. On the reverse 'Japan ceases to be great naval power'… On one side a table of rations, on the other side messages about German rationing. 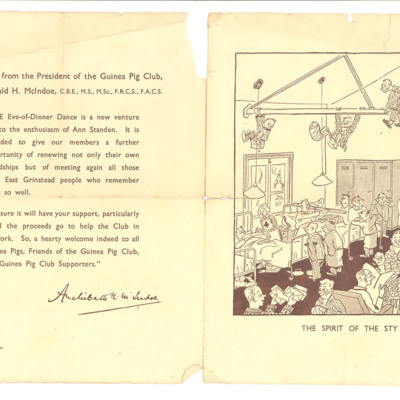 On the front a photograph of a group of men with facial burns standing around a seated man. Inside a message from the president of the Guinea Pig Club, Sir Archibald H McIndoe and a cartoon of men cavorting and gathered in a hospital ward. Captioned…

Letter from Arthur Woolf to his parents 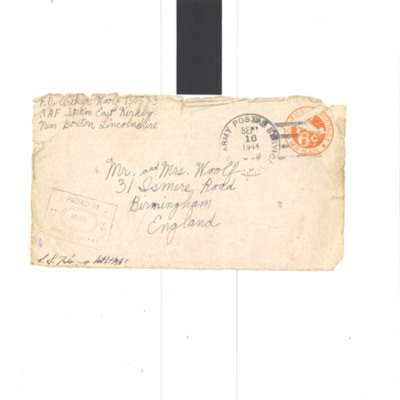 Informs them he is in a United States Army medical facility and getting better. 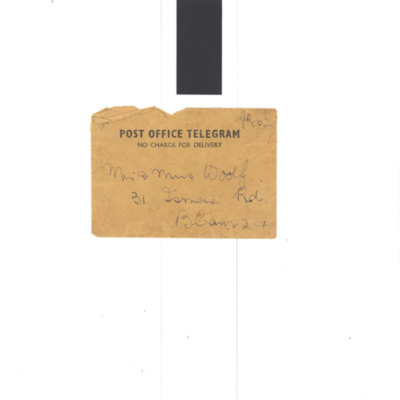 Informs him that his son was missing from air operations on night 24/25 July 1944.

Letter to Arthur Woolf's father from the Red Cross 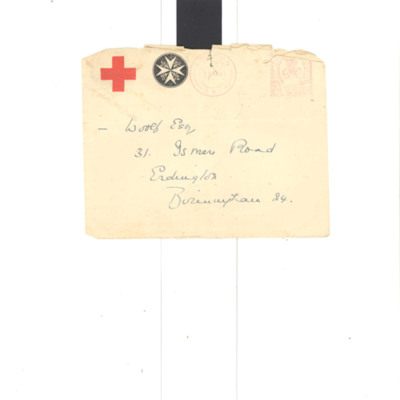 Informs him that no information had been received about his son but all possible enquiries were being made. 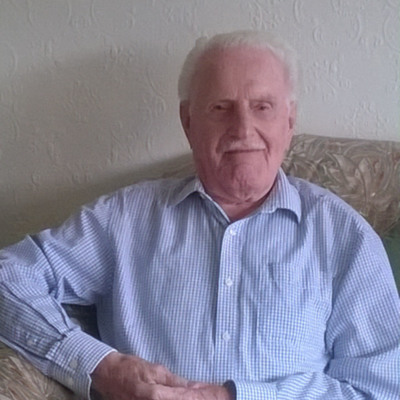 Arthur Woolf was working in an office before he volunteered for the RAF. He was keen on flying and would cycle to Castle Bromwich airfield to watch the aircraft. He was accepted for aircrew training and became a wireless operator. After joining a…
View all 23 items