One hundred and sixty-four items plus another one hundred and fifteen in two sub-ciollections. The collection concerns Flying Officer Kenneth Gill DFC (1922 - 1945, 1438901, 155097 Royal Air Force) and contains his log book, documents, photographs and family and other correspondence.
He flew operations as a navigator with 9 Squadron before starting a second tour with 617 Squadron. He was killed 21 March 1945 having completed 45 operations.

Additional information on Kenneth Gill is available via the IBCC Losses Database.

The collection has been donated to the IBCC Digital Archive by Derek Gill and catalogued by Nigel Huckins. 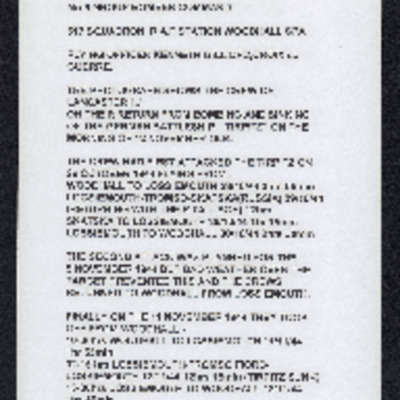 Description of three (one aborted due to weather) operations against Tirpitz, photograph of crew on return from sinking Tirpitz, poor photocopy of target photograph of attach on Tirpitz. Account of operation on E & R boat pens at Ijmuiden along with… 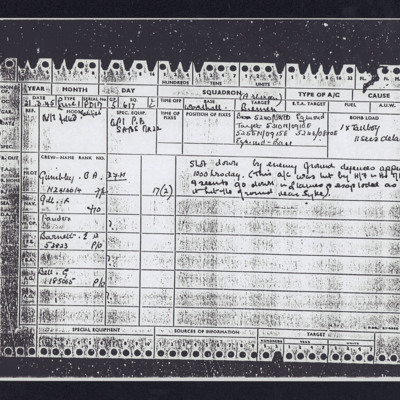 List crew and weapon (Tallboy) and target location. Notes 'shot down by enemy ground defences approx. 1000 today (This a/c was hit by H/7 in the T/A and seen to go down in flames and exploded as it hit the ground near Syke)'.

Joined 18 June 1941. Trained as navigator in Canada. After operational and conversions training in England during which he flew two operations. He was posted to 9 Squadron at RAF Bardney where he flew 25 operations which are listed. After a tour as a… 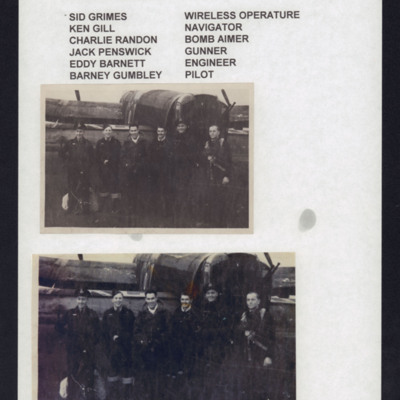 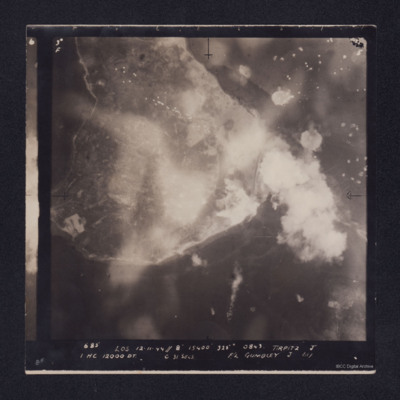 Target photograph showing shoreline, with smoke obscuring the island of Hakøya within Tromsø fjord. Battleship Tirpitz can be seen just right of centre through smoke. Three water-spouts from earlier explosions above and to the right. Anti-aircraft… 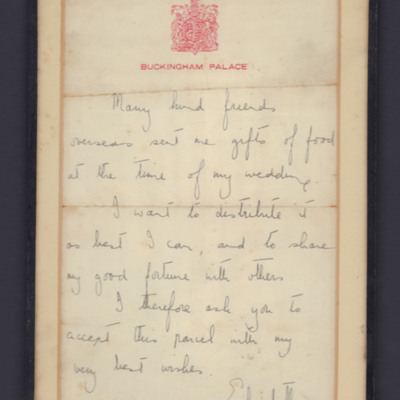 Noted that kind friends had sent gifts of food at the time of her wedding. Asks recipient to accept distributed gift parcel. 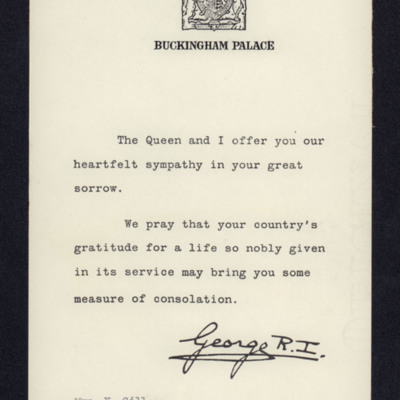 Letter of sympathy from the King to Mrs K Gill

Roll of honour in memoriam 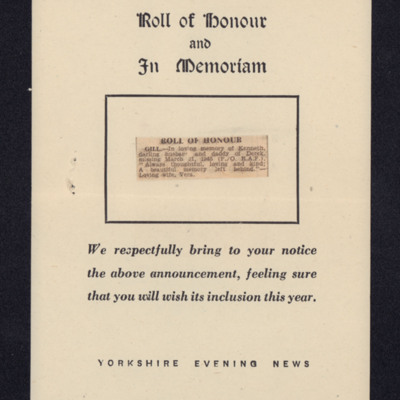 In memoriam notice for Kenneth Gill mounted on a certificate from the Yorkshire Evening News, 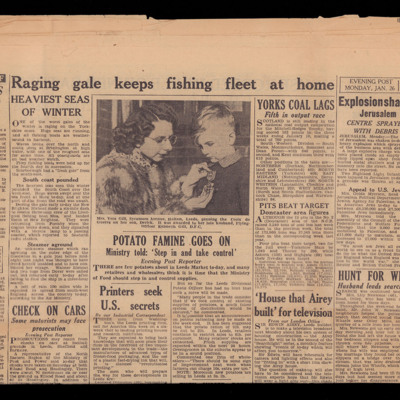 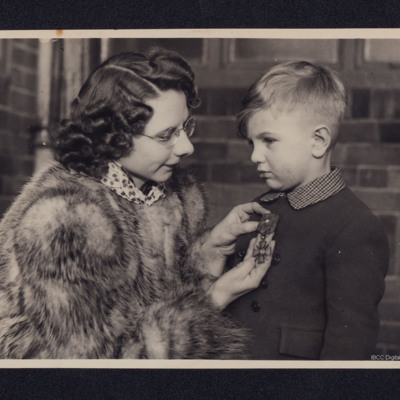 A woman wearing fur coat and glasses pins a medal onto jacket of a young boy. 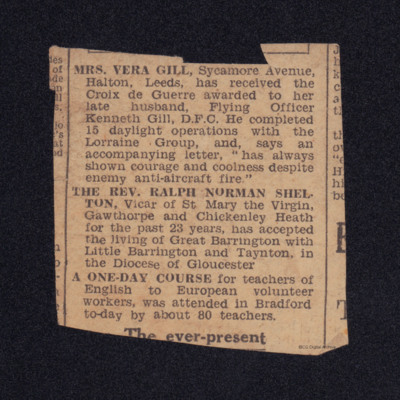 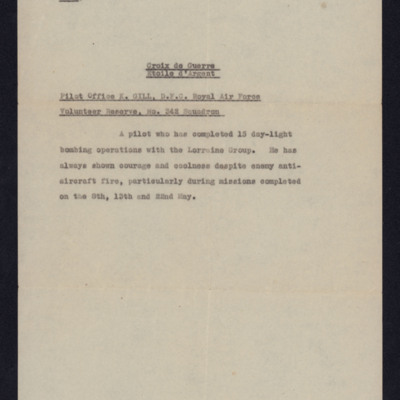 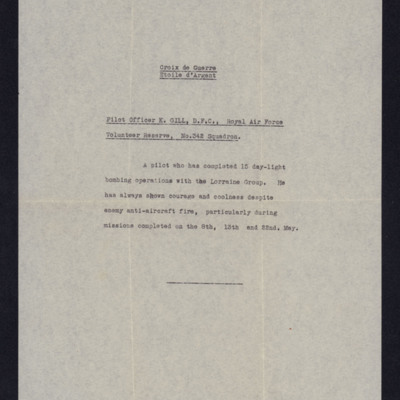 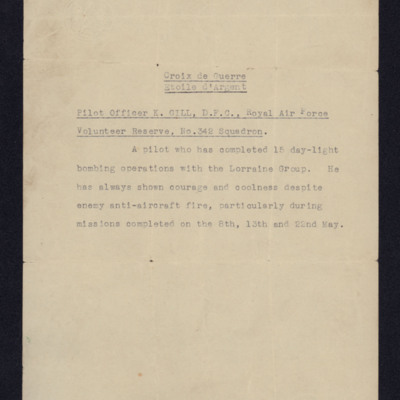 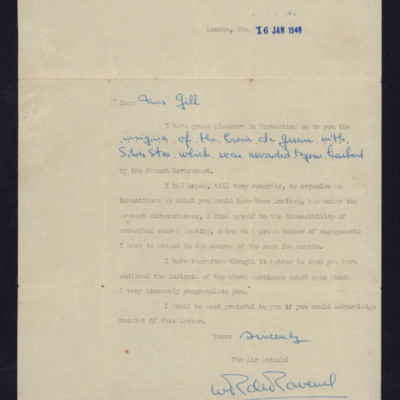 Is forwarding the insignia for the Croix de Guerre awarded to her husband. 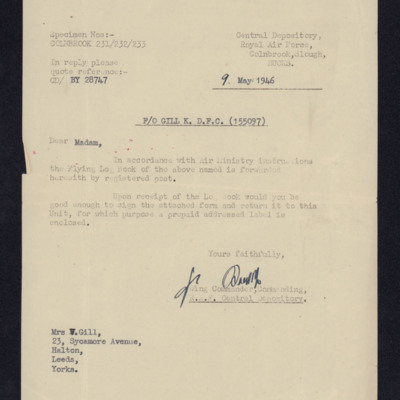 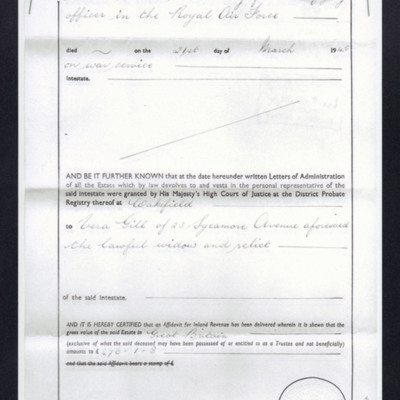 Gives value of estate and probate granted to Vera Gill. 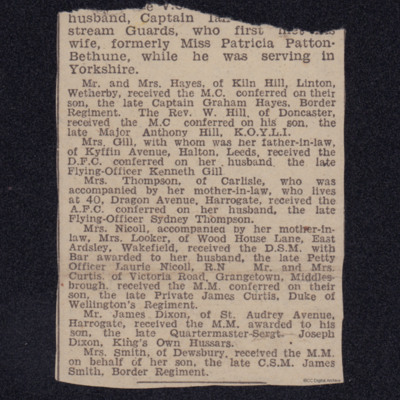 Concerns up-turned hull of Tirpitz sunk in Tromso Fjord was a tourist attraction. Reports that Mrs K Gill had now been informed that her husband previously reported missing was now presumed to have been killed. Gives some local history of Ken Gill. Includes b/w full face portrait. 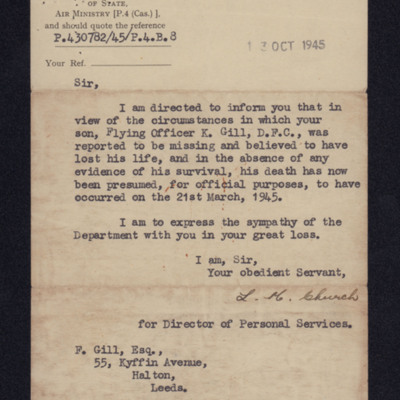 Informs him that , in view of circumstance in which his son was reported missing and believed killed, in the absence of any evidence of survival, his death was now presumed to have occurred on 21 March 1945. 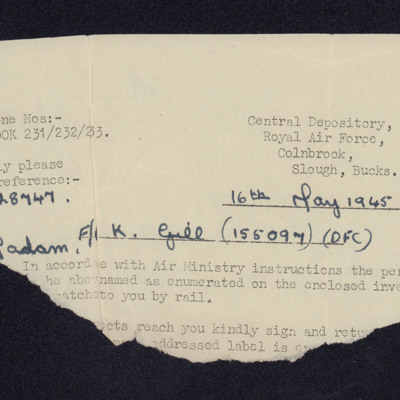 Provides confirmation that her husband was missing as a result of air operations on 21 March 1945. Explains circumstances of loss of aircraft and states it was unlikely that any crew survived. Comments that her husband had completed 45 operations.…
View all 279 items