Thirty-nine items. Album pages with photographs of family, colleagues, friends and places as well as some copies of documents and newspaper cuttings. 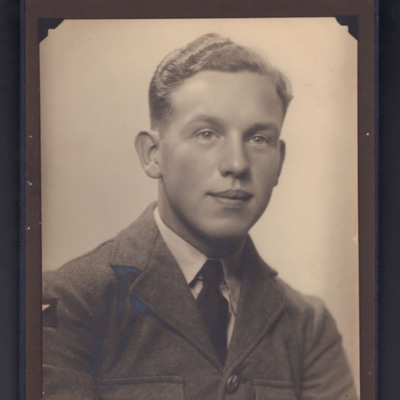 Head and shoulders portrait of an airman wearing tunic. 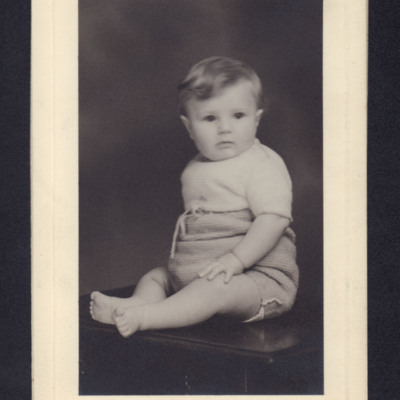 Portrait of a baby boy sitting. Captioned 'Derek at 9 months'. 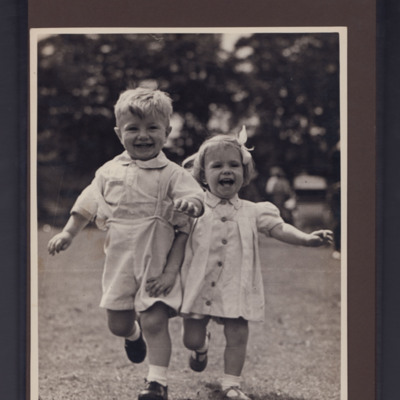 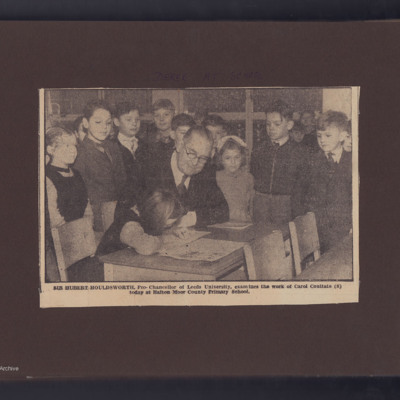 A man wearing suit and glasses sits alongside a girl writing at a desk while other children look on. Captioned 'Sir Hubert Houldsworth, Pro-Chancellor of Leeds University examines the work of Carol Coultate (8), at Halton Moor Primary School'. 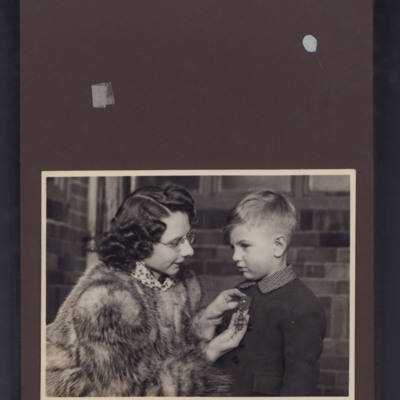 A woman wearing a fur coat pinning a medal onto a young boy, In the background brick walls and windows to house. 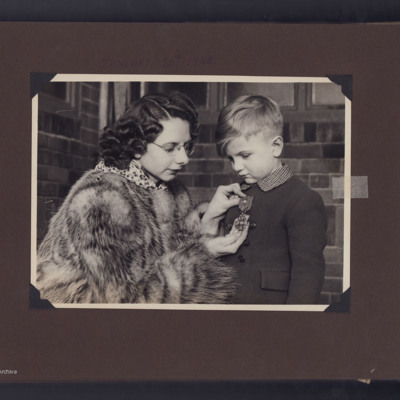 A woman wearing a fur coat pinning a medal onto a young boy, In the background brick walls and windows to house.

Man, woman and child with DFC 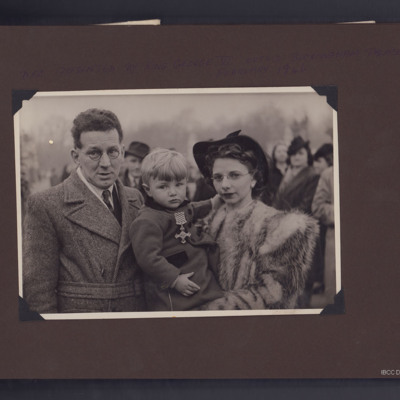 A man wearing overcoat and glasses standing next to a woman wearing fur coat and hat holding a boy, with DFC on his jacket. Other people in the background. 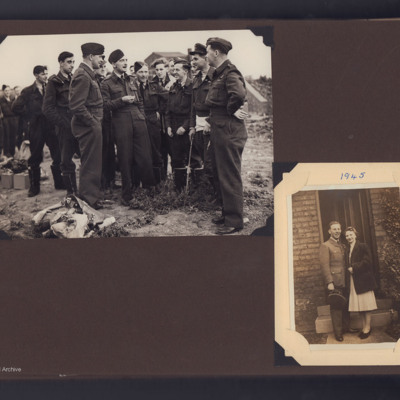 Top left - a large group of aircrew standing chatting. On the ground a parachute and other equipment.
Bottom right - an RAF officer wearing tunic and holding peaked cap, standing next to a woman, both standing at the bottom of steps to a doorway.… 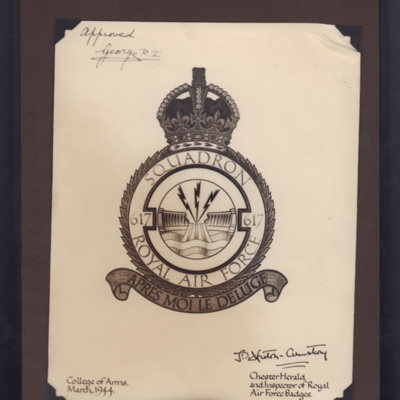 Copy of 617 Squadron crest with The King's and Chester Herald's signatures.

Group of aircrew gathered round equipment 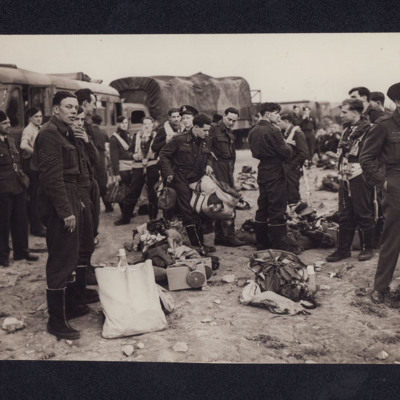 A large group of aircrew standing around various items of equipment on the ground, including two pigeon boxes, parachutes and a navigator's bag. A bus and a truck in the background. 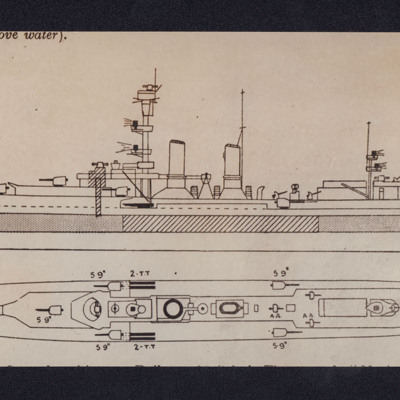 Line diagram of a warship. Part of photograph in top right and title 'Emden'. 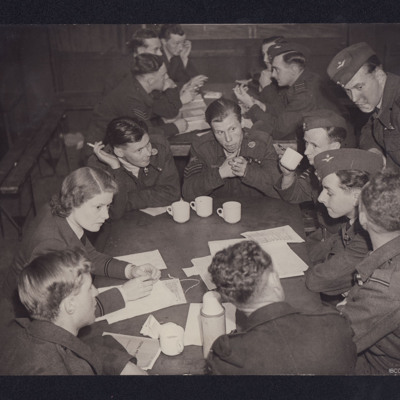 Seven airman sitting round a table being debriefed by a Women's Auxiliary Air Force officer. A wing commander leans over from the right. There are papers, mugs and thermos flasks on the table. In the background another table with five airmen. Seven airmen, two wearing flying suits, the others battledress, two with Mae Wests standing in line in front of a bomber. One has a mascot tucked into his jacket. Eight aircrew all wearing battledress, some with brevet visible and holding cups, gathered round two urns. Another airman in background left. 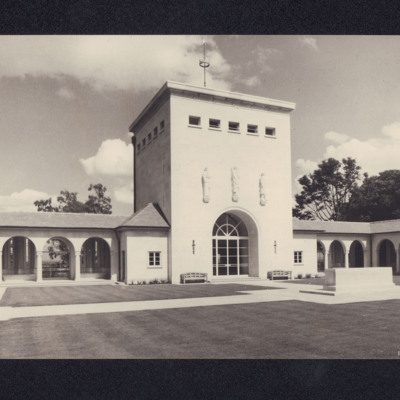 View of a memorial building and galleries and accompanying text. 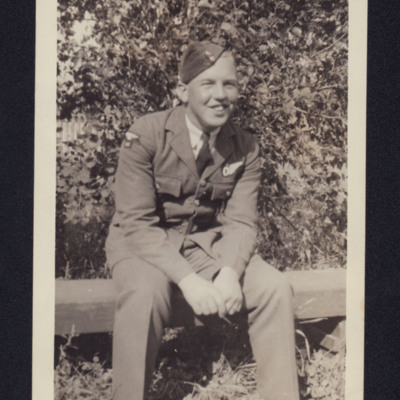 Full length image of an airman wearing tunic with observer brevet and side cap sitting on a bench with foliage in the background.

Left - A large group of airmen wearing tunics with side caps standing in two rows in front of an Anson. One officer in centre standing has a lighter uniform and peaked cap. Annotated with signatures and home towns of many of the participants.
Right… 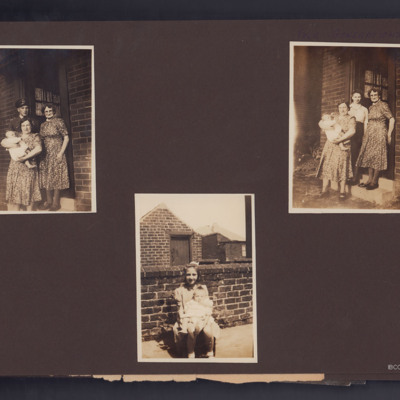 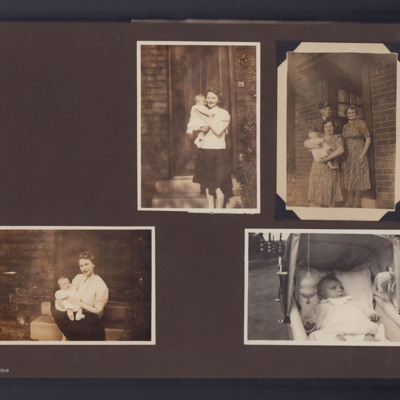 Top middle - a woman wearing skirt and blouse holding a baby standing at the bottom of steps to the door of a house.
Top right - two women wearing dresses, one holding a baby, standing in front of an RAF officer wearing tunic and peaked cap, all… 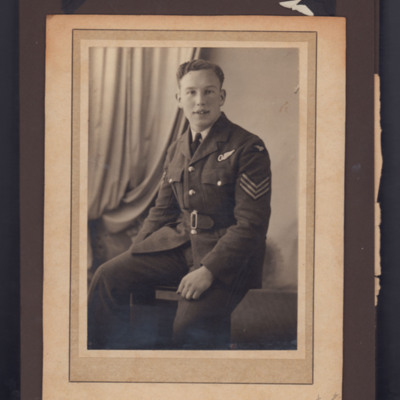 Three-quarter length image of an airman wearing tunic with observer brevet sitting on a bench with curtain in the background. Includes photocopy of photograph. 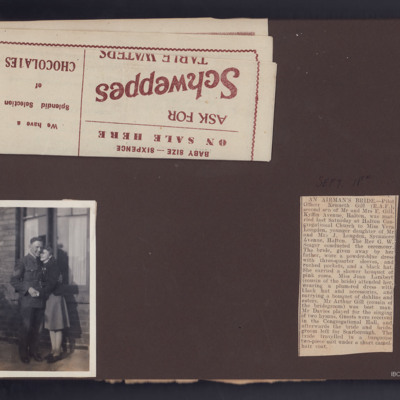 Top left - two woman with a child between then standing in a garden with wall and trees behind. Captioned 'Dot. Vera + Teddy'.
Bottom left - head and shoulders portrait of Vera.
Centre - half-length image of Kenneth wearing tunic with sergeants…
View all 39 items