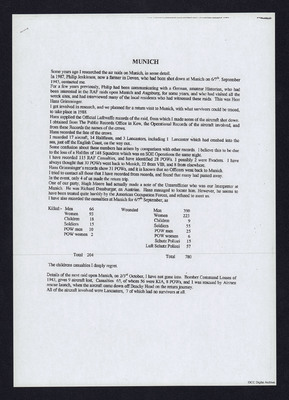 Details of research into air attacks on Munich including contact with Philip Jenkinson whose aircraft was shot down on the operation and German amateur historian. Noted number of aircraft lost, casualties RAF and German, prisoners of war. Both for 6/7 September and 2/3 October 1943.

Some years ago I researched the air raids on Munich, in some detail.

For a few years previously, Philip had been communicating with a German, amateur Historian, who had been interested in the RAF raids upon Munich and Augsburg, for some years, and who had visited all the wreck sites, and had interviewed many of the local residents who had witnessed these raids. This was Herr Hans Grimminger.

I got involved in research, and we planned for a return visit to Munich, with what survivors could be traced, to take place in 1988.

Hans recorded the fate of the crews.

I recorded 17 aircraft, 14 Halifaxes, and 3 Lancasters, including 1 Lancaster which had crashed into the sea, just off the English Coast, on the way out.

Some confusion about these numbers has arisen by comparison with other records. I believe this to be due to the loss of a Halifax of 148 Squadron which was on SOE Operations the same night.

I have recorded 115 RAF Casualties, and have identified 28 POWs. 1 possibly 2 were Evaders. I have always thought that 30 POWs went back to Munich, 22 from VIB, and 8 from elsewhere.

Hans Grimminger's records show 31 POWs, and it is known that no Officers went back to Munich.

I tried to contact all those that I have recorded from records, and found that many had passed away.

In the event, only 4 of us made the return trip.

One of our party, Hugh Moore had actually made a note of the Unteroffizeir who was our Interpreter at Munich. He was Richard Dassburger, an Austrian. Hans managed to locate him. However, he seems to have been treated quite harshly by the American Occupation Forces, and refused to meet us.

Details of the next raid upon Munich, on 2/3rd October, I have not gone into. Bomber Command Losses of 1943, gives 9 aircraft lost, Casualties 65, of whom 56 were KIA, 8 POWs, and 1 was rescued by Air/sea rescue launch, when the aircraft came down off Beach Head on the return journey.

All of the aircraft involved were Lancasters, 7 of which had no survivors at all.