Letter from Flying Officer Harold Gorton to his wife 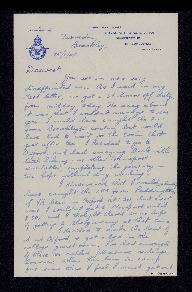 Letter from Flying Officer Harold Gorton to his wife

He writes of his 36 hour leave and social activities and training duties at RAF Turweston. He includes a coded message to his wife.

TEL. SILVERSTONE 252
OFFICERS’ MESS,
ROYAL AIR FORCE STATION,
[deleted] SILVERSTONE, [/deleted] [inserted] Turweston, [/inserted
[deleted] NR. TOWCESTER, [/deleted] [inserted] Brackley, [/inserted]
NORTHANTS.
[Royal Air Force crest]
25/2/44
Dearest,
You see in me a very disappointed man. As I said in my last letter, we got a 36 hours off duty, from midday today. The snag about it was that I couldn’t manage to see you. I could have caught the 2.12 from Brackley to London, but would have had to wait for the train that goes after tea. I decided to go to Oxford, and had amazing luck with hitch hiking (no other transport available), completing the journey in two hops without any waiting.
I discovered that I could have caught the 1.55 from Paddington [inserted] at Reading [/inserted] if I’d been in Oxford at 1.20, but as it was I couldn’t get to Newport until 8.30, and I thought there’s be no hope of getting to Abergavenny at that time.
I decided to make the best of it at Oxford, & got a bed in the college guest room. I’ve had enough of these so called pleasure outings, however. When I’ve been in camp for some time I feel I must get out
[page break]
2
and have a change, but it all turns to dust & ashes if you’re not there.
I went to the Playhouse tonight – Noel Coward’s “Design for Living,” and sat through the play feeling as miserable as sin, and wondering how Noel Coward could write such tosh. If you’d been there, we could at least have pulled the play to pieces in company. Here is a synopsis:
[underlined] Act I [/underlined] Otto, an artist, returns to his flat to discover that Leo, his best friend, has just spent the night with Otto’s girl, who’d been living with him.
[underlined] Act II [/underlined] 18 months later.
Leo & the girl have been living together, and while Leo is away for a week-end, Otto comes & sleeps with the girl. However, this time the girl runs away from both of them.
[underlined Act III [/underlined] 2 years later.
The girl has now married a middle-aged admirer. Leo & Otto turn up, & she throws over her husband, & declares she can’t live without Leo & Otto!
It’s a long time since I had
[page break]
3
the misfortune to listen to such tripe. I thought Noel Coward was better than that.
I’ve been too cheesed off to see anybody today, but I suppose I’d better go & see my tutor tomorrow.
This morning, to change a somewhat doleful subject, we had a series of introductory talks at Turweston. I have to report for flying at 8.30 on Sunday morning, but I doubt if they’ll be ready for us then, as they are a bit behind with their programme. Still, with any luck, I may be able to do some flying sometime. I haven’t flown since Jan. 21st, the longest gap I’ve had for three years.
If I’ve seemed miserable in this letter, it’s only because I want to tell you how much I miss you.
I had a look at Brackley as I passed through this afternoon,
[page break]
4.
It’s quite small, no cinema, but two or three hotels. I don’t know whether you fancy going there or to Northampton. Brackley is [deleted] 20 m [/deleted] 4 miles from Turweston, & Northampton is about 20 miles away (12 miles from Silverstone).
Richardson, the other “headless” pilot on my course, was given a crew at Turweston this morning, so he’ll now do the normal course.
All my love,
Harold.
Darling,
A[underlined]p[/underlined]parently a[underlined]l[/underlined]l w[underlined]e[/underlined] h[underlined]a[/underlined]ve a[underlined]s[/underlined] y[underlined]e[/underlined]t [deleted] belongs in [/deleted] i[underlined]s[/underlined] d[underlined]e[/underlined]finitely u[underlined]n[/underlined]dervalued. A[underlined]d[/underlined]dington, m[underlined]y[/underlined] y[underlined]o[/underlined]ung a[underlined]u[/underlined]thor, brings p[underlined]l[/underlined]enty t[underlined]o[/underlined] e[underlined]v[/underlined]ery re[underlined]v[/underlined]valuation.
PLEASE’SEND’YOUR’LOVE
Is this O.K.?