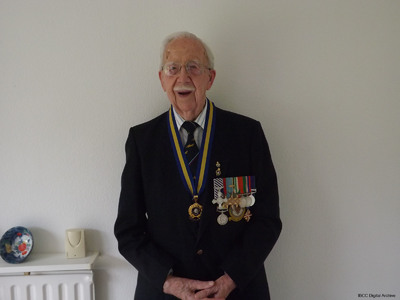 David Butler, DFC, was born in Cherry Hinton in April 1920 and joined the Royal Air Force on the 11th January 1940, serving in France at Reims as the Germans advanced. After walking some distance, he was evacuated back to England on a Polish boat and arrived in Southampton.
He tells of how he was hospitalised with a very high temperature, and how his replacement and his crew were lost over Nuremburg.
He was posted to 12 Squadron at Wickenby, flying in Lancasters as a Rear Gunner, and then he was posted to 171 Squadron at North Creake.
David tells of his scraps with the Luftwaffe and meeting some Luftwaffe Pilots at the end of the war and he tells of meeting those pilots who were firing at him.
Made a career in the Royal Airforce and served in Egypt, Iraq and Jordan as well as completing administration courses and serving at other Royal Air Force Stations including the Royal Air Force Medical Station at Headley Court as an Adjutant.
After the war, got a job at Girton College and became President of the Royal British Legion in Cambridge.
David completed a total of 55 Operations, 30 on his first tour of duty and then completing 25 operations on his second tour.

JH: instructions.
DB: Yes, oh we never got shot down so that was [laughs].
EB: Mind you-
JH: You must’ve been good! [laughs]
DB: Must’ve helped!
EB: There was a lot of rear gunners lost their lives, wasn’t there David?
DB; Oh yes.
EB: Because they used to attack the rear gunner before anything else really.
DB: I suppose so.
EB: There was quite a lot, a lot of them that got killed wasn’t there.
DB: Yes [quietly], a long time ago.
EB: So you have to count your blessings my love, don’t you?
DB: Yes, and I still think you’re beautiful! [everyone laughs].
EB: This is the flannel I have to get from being in the Air Force! [laughs].
JH: Well, I would like to thank you, David, for allowing me to record this interview today and thank you both very much.
EB: It’s been a pleasure.
DB: But I’m rather sad that I (unclear).