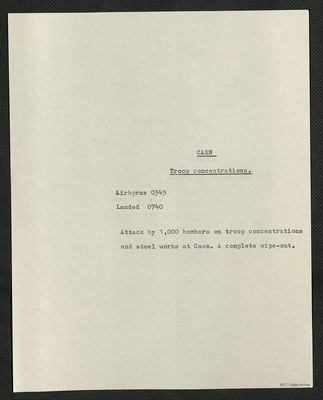 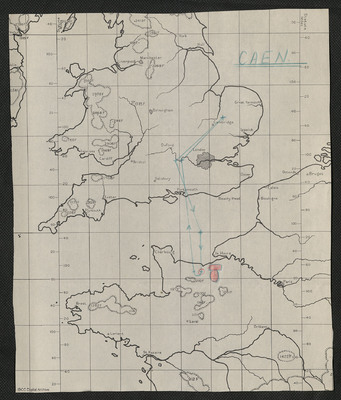 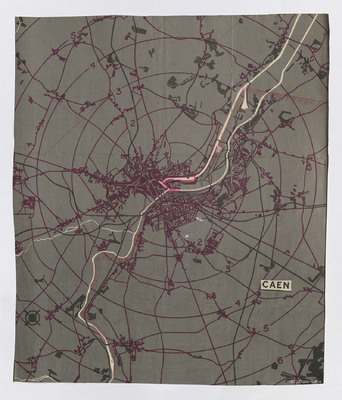 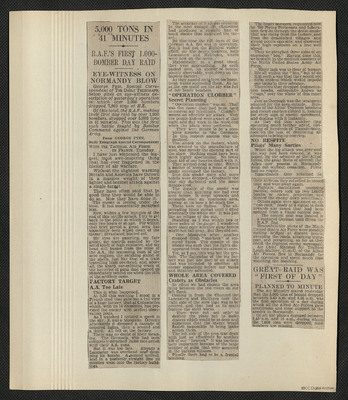 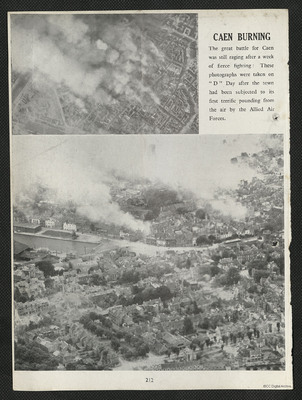 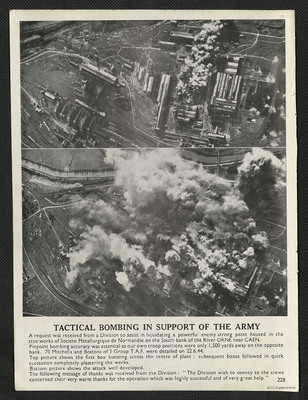 Six items covering operations around Caen. The first is Edward's description of the operation, against troop concentrations. The second is his navigation plot. The third is a print of the expected H2S return of the target. Fourth is a collection of newspaper cuttings describing the first 1,000 bomber operation carried out during daylight. Fifth is a cutting, two photographs shows the damage to Caen after a series of raids on D Day. This shows the utter devastation to the city caused by these attacks.
The sixth is of a pair of photographs captioned 'Tactical bombing in support of the Army' that reports the tactical bombing that was undertaken a few days after the heavy bomber operation to on Caen. The first shows the initial bombs exploding in the middle of the target. The second shows the attack well under way with the target almost obscured by bombs exploding and fires.

Attack by 1,000 bombers on troop concentrations and steel works at Caen. A complete wipe-out.

[Italics] George Fyfe, Special Correspondent of THE DAILY TELEPGRAPH, below gives an eye-witness description of yesterday’s operation in which over 2,000 bombers dropped 7, 000 tone of H.E.

Of this total the R.A.F., making their first day raid by over 2,000 bombers, dropped over 5,000 tons in 41 minutes. This was the first such battle fought by Bomber Command against the German Army.[/Italics]

I have just witnessed the biggest, most awe-inspiring this that has ever happened in the history of air warfare.
Without the slightest warning Britain and America have thrown a massive weight of their fighter and bomber attack against a single target.

They have often said that in good times they would be able to do so. Now they have done it.
The enemy is reeling under the blow. It has momentarily paralysed him.

Now within a few minutes of the end of this terrific attack, I try to get back to the point at which it began, only two hours or so ago. For within that brief period a great area has apparently been wiped clean of the enemy: devastated, blotted out.

My eyes are smarting my face grimy, my nostrils assailed by the acrid smell of high explosive, and my head still buzzes from the noise of the A.A., the unceasing hum of the aero engines, the swishing sound of the shells, just like that of a train travelling high overhead, and above all, the sharp, ear-splitting crack of the batteries of guns that opened up immediately behind me when the turn of the artillery came.

This is what happened this morning I stood in a French road that gave me a full view of a huge factory, that at Colombelles which, with 14 chimneys, has provided the enemy with perfect observation posts.

I watched I noticed a speck in the sky. It was a Mosquito. Directly afterwards it dropped a cascade of coloured lights, then a second and a third. All fell on the factory.

There was no doubt of their meaning. The Germans, who had been completely surprised, came into action with their A.A. guns.

But it was too late. Already a Lancaster was overhead and dropping its bombs. A second arrived, and in a perfectly straight line sites missiles went into the factory buildings.

The accuracy of it all was amazing. In the next instant the explosions has produced a straight line of black smoke that indicated the target.

By this time the full force of the German A.A. fire was in operation. But it had not the slightest visible effect on the heavy bombers, both Lancasters and Halifaxes, which were now on the scene.

Majestically in a great cloud they were approaching. As each passed over, its shower of bombs, plainly observable, went down on the hapless factory.

As they passed on to turn for home, fresh waves succeeded them. As far as the eye could see, the sky was full of our heavy bombers.

“Operation Clobber” was on. That was the name that had been used to conceal our intentions. “Clobber” means an effective air attack. Very few people indeed were aware of that night and day wok in the week-end when the plans were perfected.

They were meant to be a complete surprise to the Germans. In this respect success was undoubted.
The attack on the factory, which was devoted to the manufacture of steel, was merely the opening part of the show. Nothing could have been more highly spectacular. No fewer than 450 of our heavies dealt with it.

They arrived dead on time. Within a matter of seconds a mass of black smoke enveloped the factory.

Into this smoke more and more bombs were dropped. Gradually the blue sky darkened and the moon disappeared.

The density of the smoke was greater than anything one had ever seen before. It crept upwards and outwards over an enormous area, leaving at its base a jet-black line.

There were no flames. The all-pervading black spread until it filled practically the whole sky. It was just like an eclipse of the sun.

Standing as I was within two or three miles of the target I wondered more than once whether stray bombs might not fall near. But they did not.

One Mosquito after another dropped fresh “markers” of coloured flares. The density of the smoke was such that the lights disappeared from view almost at once.

Yet, as I say, this was but the prelude. The flattening of the big factory was just one part of an attack that was intended to smother all enemy opposition before our tanks and infantry advanced.

In effect we had chosen the area lying between the two rivers to our left flanks.
Coming in from the Channel the Lancasters and Halifaxes took the right side of the area that was to be covered, and that had as its main feature the steel works.

They were out not only to destroy the place but to make craters which would be so deep and numerous that the enemy would find it impossible to bring tanks across the.

The left side of the area was dealt with just as effectively by another 450 of our “heavies.” It was particularly important because of the large number of guns that were mounted in various villages.

Finally they had to be a frontal bombing.

The heavy bombers, reinforced now by 750 flying Fortresses and Liberators, flew on through the dense smoke that was rising from the factory, and from the demolished villages and strong points opposite, and showered their high explosive on a line well ahead.

Thus we ploughed three sides of an enormous “box.” Having done this, we brought in the medium bombers of the Ninth United States Army Air Force.

Their task was to clear of human life all within the “box,” but to do it in such a way that they would not form craters which would impede our tanks in their advance,

Therefore they dropped fragmentation bombs, colloquially known as “frags,” over the whole if this inner area.

Just as thorough was the treatment adopted for the area outside. Hundreds of the Allies’ Typhoon bombers and rocket carriers circled it, looking for every sign of enemy movement, and dealing with it instantly.

As they did this, another ring operating much further afield, consisting of hundreds of Thunderbolts, took on the task of destroying all attempts to bring up reserves.

NO REPITE
Pilots’ Many Sorties

When the big attack was over and the way had been cleared, it was hoped, for the advance of the Allied forces, the great fleets of aircraft the Allies now possess in Normandy went out without cessation. Pilots had no respite.

Immediately they returned to their airfield they refuelled in record time and were away again.

Fighters maintained unending patrols; others took up two 1,000lb bombs or rocket projectiles and hunted the enemy down relentlessly.

Others again were stationed on the “cab rank,” ready at a signal to dash towards any target that had been spotted from a visual control post.

The control post was located in a captured German tank flying the R.A.F. flag.

Meanwhile the pilots of the Ninth United Stated Air Force were steadily cutting bridges at distant point, sweeping the roads, attacking transport, and preventing, so far as they could, the slightest enemy movement.

Air Chief Marshall Sir Trafford Leigh-Mallory, C-in-C. of the Allied Air Force, flew to Normandy for the operation and spent much of the time watching the bombing.

GREAT RIAD WAS “FORST OF DAY”
PLANNED TO THE MINUTE

The Air Ministry stated yesterday that the 5,000 tons of bombs dropped between 5.45a.m. and 6.26 a.m. was the first operation of a day during which all the Allied Air Forced gave continuous and close support to the armies in Normandy.

The great battle for Caen was still raging after a week of fierce fighting: These photographs were taken on “D” Day after the town has been subjected to its first terrific pounding from the air by the Allied Air Forces

TACTICAL BOMBING IN SUPPORT OF THE ARMY

A request was received from a Division to assist in liquidating a powerful enemy strong point housed in the steelworks of Societe Metallurgique de Normandie on the South bank of the Rover ORNE near CAEN. Pinpoint bombing accuracy was essential as our own troop positions were only 1,500 yards away on the opposite bank. 70 Mitchell and Bostons of 2 Group T.A.F. were detailed on 22.6.44.

Top picture shows the first box bursting across the centre of plant; subsequent boxes followed in quick succession completely plastering the works.
Bottom picture shows the attack well developed.
The following message of thanks was received from the Division: “The Division wish to convey to the crews concerned their very warm thanks for the operation which was highly successful and of a very great help. “