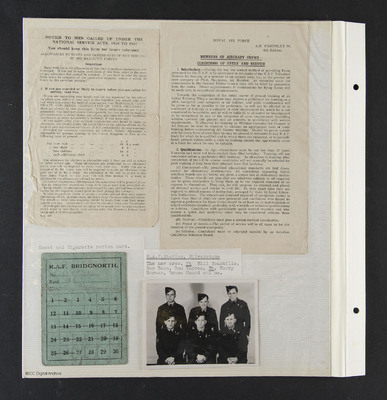 Four items from a scrapbook.
#1 is call up papers
#2 is Conditions of Entry into the RAF
#3 is a ration card for sweets and cigarettes
#4 is a photograph of Ernest and his crew at RAF Silverstone. 'Ft Bill Bouskille, Don Boon, Ron Warren. Bk. Harry Horner, Bruce Maund and me.'

You should keep this form for future reference

Important
Make your claim for allowances at the time of medical examination and interview. If you fail to make your claim at this time, delay in the issue of any allowance due cannot be avoided. If you have to take the claim form home to complete all the particulars required, return it within 48 hours in the envelope provided.

1. If you are married or likely to marry before you are called for service, read this.

If you are supporting your family and are not separated by the refusal on either your wife's or your part to live together, you should take with you when you attend for medical examination your MARRIAGE CERTIFICATE AND BIRTH CERTIFICATES OF YOUR CHILDREN if these are already in your possession. If these certificates are not in your possession, you need not obtain them specially but you should be ready to give particulars of dates, names and places, and take with you baptismal certificates or other documentary evidence, if you have any.

If you marry after your medical examination and desire to claim an allowance, you should notify the Local Office at the address shown on the back of your registration certificate (N.S.2) immediately on your marriage.

Provided the necessary conditions are fulfilled, Family Allowance is admissible for persons residing in the United Kingdom or Eire at the following rates at present:-

The allowance for children is admissible only if they are still at school or below school age. These allowances are additional to an allotment which you will be required to make from your pay. While you are in receipt of 2s. 6d. a day you will be required to make an allotment from your pay of 3s. 6d. a week. An additional 3s. 6d. will be added to this from Army Funds, so that your wife will then receive 7s. a week in addition to the allowances referred to above.

(A special Dependants' Allowance at the same rates will be granted if you have an unmarried dependant living with you as your wife, provided she is being wholly or substantially maintained by you and has been so maintained for the requisite period prior to your joining the Colours.)
If your dependants reside in certain countries abroad they may receive allowances which, in some cases, are lower than the rates indicated above. For details of these rates enquiries should be made from your Unit immediately you join. Information will then be obtained from your Paymaster.

If your pay and allowances are likely to be insufficient to meet expenses which must be met during your service with His Majesty's Forces, read paragraph 3 of this pamphlet.

1. Introductory. – During the war the normal method of providing flying personnel for the R.A.F. is by enlistment in the ranks of the R.A.F. Volunteer Reserve for training as a member of an aircraft crew, i.e., in the general air crew category of Pilot, Navigator, Air Bomber. As vacancies occur for commissions in the General Duties branch they will be filled by promotion from the ranks. Direct appointments to commissions for flying duties will be made only in exceptional circumstances.

Towards the completion of the initial course of ground training at an Initial Training Wing a candidate may express a preference for training as a pilot, navigator (any category) or air bomber, and while consideration will be given as far as possible to his preference, he will not be allotted to or continued in training in a category of crew employment for which his is not considered to be suitable, and he will be liable to be allocated for training and to be remustered in any of the categories of crew employment (including wireless operator (air gunner) and air gunner), in accordance with service requirements. If allocated for training as Wireless Operator/Air Gunner or Air Gunner he may be required to undergo an appropriate form of trade training before commencing Air Gunner training. Should he prove unsuitable for every form of crew duty he may be allowed to remuster to any R.A.F. trade for which he is qualified and in which there are vacancies, or to aircraft-hand, general duties, with a view to training should the opportunity occur in a trade for which he may be suitable.

2. Qualifications, – (i) Age. – Candidates must be not less than 17 years 3 months and must not have reached their 33rd birthday. Training will not commence before a candidate's 18th birthday. In allocation to training after completion of the I.T.W. course, candidates will not normally be selected for pilot training if they have attained their 31st birthday.

(ii) Educational. – No prescribed educational standards are laid down, except for elementary mathematics. All candidates appearing before selection boards (see (v) below) are given a simple test in elementary mathematics. Those who do not pass (but are otherwise suitable in all respects) can be given instruction to bring them up to the required standard at no expense to themselves. They can, for this purpose, be attested and placed on deferred service and remain in civil life. In their spare time they are required to attend courses of instruction, arranged for them by Local Education Authorities. The educational standard required of navigators (radio) is higher than that of other air crew personnel and candidates who intend to express a preference for these duties should be at least up to matriculation or school certificate standard, preferably with scientific or technical qualifications or hobbies. Candidates with particularly quick mental re-action and who possess a quick and analytical mind may be considered without these qualifications.

(iv) Period of Service. – The period of service will in all cases be for the duration of the present emergency.

(v) Selection. – Candidates must be adjudged suitable by an Aviation Candidates Selection Board.