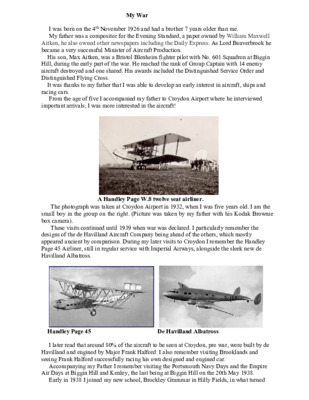 Starts with early life and interest in aviation, including photographs of pre WW2 aircraft seen at Croydon airport. Recollects going to last open day at RAF Biggin Hill. Continues account of events of lead up to and start of the war. Writes a little about the RAF and his personal and family circumstances. Provides some thoughts on the Battle of Britain.

I was born on the 4th November 1926 and had a brother 7 years older than me.
My father was a compositor for the Evening Standard, a paper owned by William Maxwell Aitken, he also owned other newspapers including the Daily Express. As Lord Beaverbrook he became a very successful Minister of Aircraft Production.
His son, Max Aitken, was a Bristol Blenheim fighter pilot with No. 601 Squadron at Biggin Hill, during the early part of the war. He reached the rank of Group Captain with 14 enemy aircraft destroyed and one shared. His awards included the Distinguished Service Order and Distinguished Flying Cross.
It was thanks to my father that I was able to develop an early interest in aircraft, ships and racing cars.
From the age of five I accompanied my father to Croydon Airport where he interviewed important arrivals; I was more interested in the aircraft!


A Handley Page W.8 twelve seat airliner.
The photograph was taken at Croydon Airport in 1932, when I was five years old. I am the
small boy in the group on the right. (Picture was taken by my father with his Kodak Brownie box camera).
These visits continued until 1939 when war was declared. I particularly remember the designs of the de Havilland Aircraft Company being ahead of the others, which mostly appeared ancient by comparison. During my later visits to Croydon I remember the Handley Page 45 Airliner, still in regular service with Imperial Airways, alongside the sleek new de Havilland Albatross.

I later read that around 80% of the aircraft to be seen at Croydon, pre war, were built by de Havilland and engined by Major Frank Halford. I also remember visiting Brooklands and seeing Frank Halford successfully racing his own designed and engined car.
Accompanying my Father I remember visiting the Portsmouth Navy Days and the Empire Air Days at Biggin Hill and Kenley, the last being at Biggin Hill on the 20th May 1938.
Early in 1938 I joined my new school, Brockley Grammar in Hilly Fields, in what turned
Page 2

out to be a very short time. I remember there was talk of another war with Germany culminating with the Munich Crisis in the summer of ’38, resulting in the school being evacuated to Robertsbridge, 10 miles north of Hastings. I chose not to go and was left without a permanent school until later in the year, when I joined the South East London Technical Institute on a three year engineering course.
Our Prime Minister, Neville Chamberlain, proclaimed he had averted another war with Germany, when he arrived at Heston Airport, on the 30th September 1938, waving a piece of paper containing Hitler’s signature, and saying that an agreement had finally been reached over problems with Hitler annexing territory on his borders.

However this was not to be and Germany invaded Czechoslovakia on March 15th 1939. Once again Britain and France did nothing! Next Hitler began to threaten Poland and at last Chamberlain responded by saying that an attack on Poland would not be tolerated and that an attack on them would be followed by a declaration of war.
On May 22nd Italy signed a pact declaring that they would support Germany in the event of war. On the 23rd August, Russia (Stalin) signed a non- aggression pact with Germany. Thus Hitler thought he had tied up all the loose ends and was now ready to invade Poland.
On September 1st Hitler invaded Poland and we responded by saying that if Germany had not withdrawn their troops by the 3rd September, we would be at war. Again Hitler did not believe that we would do anything and so went ahead with the invasion. As a result, at 1l o’clock on Sunday the 3rd September, Neville Chamberlain announced that we were once again at war with Germany. Shortly afterwards France also declared war on Germany.
On that day I remember my family gathered around the radio listening to our Prime Minister with interest. Upon hearing his announcement there followed a stunned silence; my parents couldn’t believe that we were once again at war, just 21 years after being involved in the horrors of the last war. For me this seemed to be the culmination of events following the evacuation of my school a year earlier.
My brother Bill was twenty and serving an apprenticeship in the printing industry. Together with friends he enrolled in the Royal Air Force Volunteer Reserve and became a member before the year was out. I think the feeling was that they thought the war would be over very quickly and wanted a piece of the action before it was too late. My brother was the only survivor of the four that joined at that time.
I was not so sure, during the last Open Day visit to our local airfield at RAF Biggin Hill, I was aware that most of the aircraft on display
were obsolete and no match for the new German Air Force. The Hurricane was in squadron use
and a Spitfire was on show, together with a Wellington bomber, but most of the displays were performed by obsolete biplanes.
Page 3

At that time I was an avid reader of aviation magazines and couldn’t imagine a successful result of our ancient biplanes against the latest Messerschmitt monoplane fighters.
The first of our modern fighters, the Hawker Hurricane only began to enter service in December 1937; although by September 1939 nearly 500 Hurricanes had been produced, equipping 18 squadrons, including the two resident squadrons at Biggin Hill.
If we had gone to war earlier we would have been fighting Germany’s latest monoplane aircraft with obsolete biplanes and without Dowding’s invaluable early warning system.
While our defensive forces were being modernised other divisions of our Air Force were neglected. Our attacking bombers had to make do with obsolete aircraft and suffered the consequences.
When the Battle of Britain is celebrated the invaluable contribution made by our airman, flying inadequate aircraft, is largely forgotten. In fact during the Battle of Britain we lost more aircrew flying the attacking bombers than from our defensive fighters, 544 from Fighter Command, 280 from the Fleet Air Arm and 780 flying obsolete bombers.
I would like to think that the Battle of Britain was won because of the Spirit of our Nation at that time, with all involved having a part to play, including our Merchant Navy, contributing to its successful outcome.
I knew little about our Army but was impressed at what I had seen at the last Portsmouth Royal Navy Open Day. I was well aware of what could be in store for us after seeing the result of Germany’s newly formed air force bombing civilians in the Spanish civil war, a war that started on the 17th July 1936 and lasted until the 1st April 1939.
Then, within a few hours following the declaration of war, the air raid warning sounded and I expected the worst! Fortunately it was a false alarm and with some trepidation had lunch; this was how I remember the start of the war. Upon reflection the 1939 war began to affect my life with the interruption of my schooling during the summer of 1938 and continued until some time after 1954 when rationing finally finished.
Although the actual fighting finally stopped with the surrender of the Japanese on the 15th August 1945, the effects of the war was to be seen and felt long into the 1950’s. Even now I cannot forget the experience and, although fortunate in not having been a member of the fighting forces, at least able to relate to their personal experiences.
I have no doubt that the courage of those that took part in the Battle of Britain saved our country from becoming yet another member of Hitler’s Third Reich. I feel privileged when able to record the remarkable experiences of those who experienced the physical and mental horrors of war and can only apologise to those who consider such memories as unworthy subjects for modern day conversation. It only takes the sound of a Merlin engine to evoke my memories of the war, while to others it is just the sound of another engine.
While it is possible to recreate the physical symbols of war in a museum, it is very difficult, if not impossible, to invoke the spirit of the lives that once inhabitant those objects. They were real people who once lived in the environment of that time, with the daily uncertainties
of what tomorrow might bring, assuming we would still be alive to enjoy it, the food, the music, the radio, all the things that bring back memories of that period. It is these memories that add real meaning to the museum objects on display. Without memories relics just relate to another period in history.
It is perhaps unfortunate that when I hear the modern generation chattering on about their holidays and other current topics I find difficulty in maintaining any real interest, allowing my concentration to drift back to a period which is still very fresh in my memory. I then have to accept that I have become just another old bore that keeps prattling on about the war.