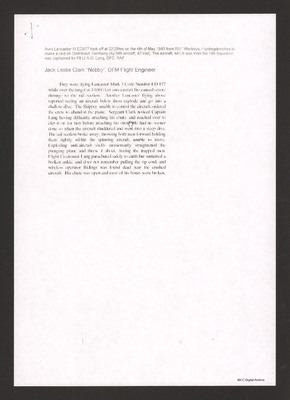 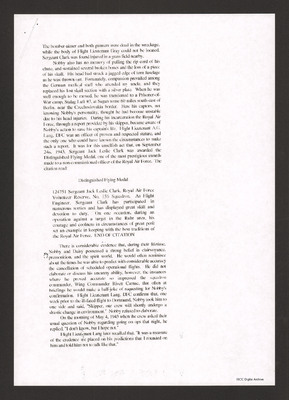 Relates "Nobby" Clark's experiences after his aircraft was hit by anti aircraft fire and exploded. Initially trapped as the aircraft broke up an span with him eventually being thrown out along with the pilot and parachuted safely to earth despite injuries. Continues with description of fate of other crew members and his time as a prisoner of war and the award of Distinguished Flying Medal for saving his captain's life. Includes citation for DFM and some discussion on clairvoyance and premonition.

Avro Lancaster III ED877 took off at 22.29hrs on the 4th May 1943 from RAF Warboys, Huntingdonshire tyo make a raid on Dortmund, Germany (by 596 aircraft, 42 lost). The aircraft, which was from No. 156 Squadron, was captained by Flt Lt A.G. Lang, DFC RAF.
Jack Leslie Clark “Nobby”, Flight Engineer
They were flying Lancaster Mark 3 Code Number ED877 while over the target at 19,000 feet anti aircraft fire caused severe damage to the tail section. Another Lancaster flying above reported seeing an aircraft below then explode and go into a shallow dive. The skipper, unable to control the aircraft, ordered the crew to abandon the aircraft. Sergeant Clark noticed Captain Lang having difficulty attaching his chute, and reach over to clip it on for him before attaching his own. He had no sooner done so when the aircraft shuddered and went into a steep dive. The tail section broke away, throwing both men forward holding them tightly within the spinning aircraft, unable to move. Exploding anti-aircraft shells momentarily straightened the plunging plane and threw it about, freeing the trapped men. Flight Lieutenant Lang parachuted safely to earth but sustained a broken ankle, and does not remember pulling the rip cord, and wireless operator Ridings was found dead near the crashed aircraft. His chute was open and most of his bones were broken.

The bomber-aimer and both gunners were dead in the wreckage, while the body of Flight Lieutenant Gray could not be located. Sergeant Clark was found injured in a grass field nearby
Nobby also has no memory of pulling the rip cord of his chute, and sustained several broken bones and the loss of a piece of his skull. His head had struck a jagged edge of torn fuselage as he was thrown out. Fortunately, compassion prevailed among the German medical staff who attended my uncle, and they replaced his lost skull section with a silver plate. When he was well enough to be moved, he was transferred to a Prisoner-of-War camp, Stalag Luft #3 at Sagan some 60 miles south-east of Berlin, near the Czechoslovakia border. Here his captors, not knowing Nobby’s personality, thought he had become unstable due to his head injuries. During his incarceration the Royal Air Force, through a report provided by his skipper, became aware of Nobby’s action to save his captain’s life. Flight Lieutenant A.G. Lang, DFC was an officer of proven and respected stature, and the only one who could have known the circumstances to make such a report. It was for this unselfish act that, on September 24th 1943, Sergeant Jack Leslie Clark was awarded the Distinguished Flying Medal, one of the most prestigious awards made to a non-commissioned officer of the Royal Air Force. The citation read:
Distinguished Flying Medal
125751 Sergeant Jack Leslie Clark, Royal Air Force Volunteer Reserve, No. 156 Squadron. As Flight Engineer, Sergeant Clark has participated in numerous sorties and has displayed great skill and devotion to duty. On one occasion, during an operation against a target in the Ruhr area, his courage and coolness in circumstances of great peril set an example in keeping with the best traditions of the Royal Air Force. END OF CITATION.
There is considerable evidence that, during their lifetime, Nobby and Daisy possessed a strong belief in clairvoyance, premonition, and the spirit world. He would often reminisce about the times he was able to predict with considerable accuracy the cancellation of scheduled operational flights. He did not elaborate or discuss his uncanny ability, however, the instances where he proved accurate so impressed the squadron commander, Wing Commander Rivell Carnac, that often at briefings he would make a half joke of requesting for Nobby’s confirmation. Flight Lieutenant Lang DFC confirms that, one week prior to the ill-fated flight to Dortmund, Nobby took him to one side and said, “Skipper, our crew will shortly undergo a drastic change in environment”. Nobby refused to elaborate.
On the morning of May 4, 1943 when the crew asked their usual question of Nobby regarding going on ops that night, he replied, “I don’t know, but I hope not”.
Flight Lieutenant Lang later recalled that, “It was a measure of the credence we placed on his predictions that I rounded on him and told him not to talk like that”.