He flew with the R.A.F. to Ulm. Ex-pilot amazed by our new bombing technique 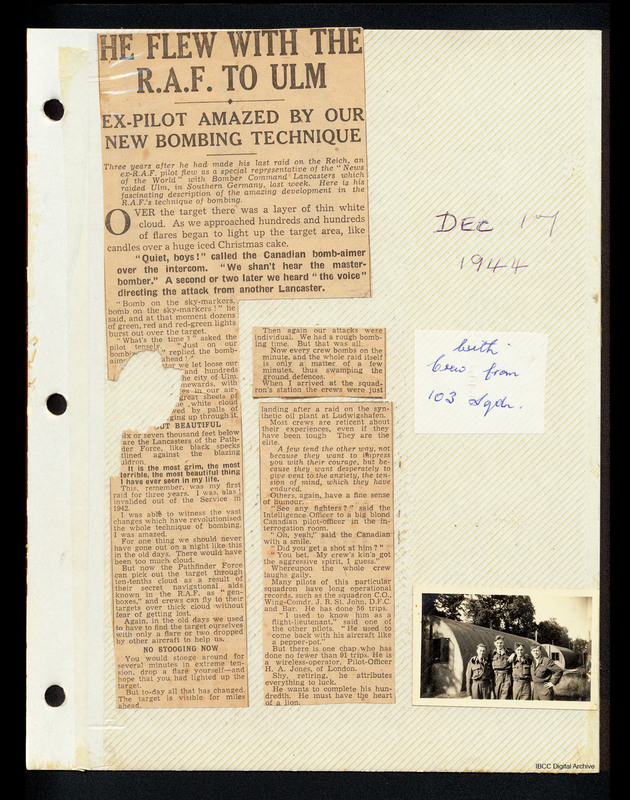 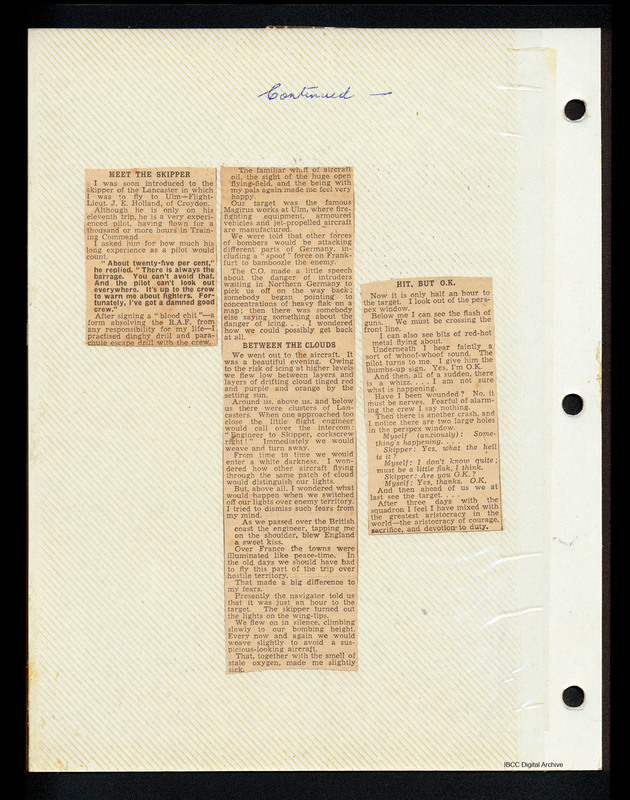 He flew with the R.A.F. to Ulm. Ex-pilot amazed by our new bombing technique

An ex-RAF pilot describes a bombing operation to Ulm in Southern Germany, He hadn't flown for three years and he is amazed at the technical improvements in hitting the targets using the Pathfinder force. He mentions the squadron CO, Wing-Comdr J R St John, DFC and Bar, and his 56 operations. Also a wireless operator Pilot Officer HA Jones with 91 operations. The captain of the Lancaster that the journalist flew in was Flight-Lieut. J E Holland. There is a photograph of four airmen captioned ' L to R "Nobby" Clark, Lou Morgan, "Russ" Johnstone, Jack Round'. The two items are captioned ' Dec 17 1944 with crew from 103 Sqdn'.

Newspaper cutting and a b/w photograph on two album pages

HE FLEW WITH THE R.A.F. TO ULM
EX-PILOT AMAZED BY OUR NEW BOMBING TECHNIQUE
Three years after he had made his last raid on the Reich, an ex-R.A.F. pilot flew as a special representative of the “ News of the World “ with Bomber Command Lancasters which raided Ulm, in southern Germany, last week. Here is his fascinating description of the amazing development in the R.A.F.’s technique of bombing.

Over the target there was a layer of thin white cloud. As we approached hundreds and hundreds of flares began to light up the target area, like candles over a huge iced Christmas cake.
“Quiet, boys! “called the Canadian bomb-aimer over the intercom. “We shan’t hear the master-bomber.” A second or two later we heard “the voice” directing the attack from another Lancaster.
“Bomb on the sky-markers, bomb on the sky-markers!” he said, and at that moment dozens of green, red and red-green lights burst out over the target.
“What’s the time ?” asked the pilot tensely. “Just on our bombi [missing] “ replied the bomb-aim [missing] ahead !”
[missing] we let loose our [missing] and hundreds [missing] he city of Ulm. [missing] mewards, with [missing] es in our air- [missing] great sheets of [missing] e, white cloud [missing] wed by palls of [missing] ging up through it.
[missing] BEAUTIFUL
Six or seven thousand feet below [missing] are the Lancasters of the Pathfinder Force, like black specks [missing] tlined against the blazing [missing] uldron.
It is the most grim, the most terrible, the most beautiful thing I have ever seen in my life.
This, remember, was my first raid for three years. I was, alas! invalided out of the service in 1942.
I was able to witness the vast changes which have revolutionised the whole technique of bombing. I was amazed.
For one thing we should never have gone out on a night like this in the old days. There would have been too much cloud.
But now the Pathfinder Force can pick out the target through ten-tenths cloud as a result of their secret navigational aids known in the R.A.F. as “gen-boxes,” and crews can fly to their targets over thick cloud without fear of getting lost.
Again, in the old days we used to have to find the target ourselves with only a flare or two dropped by other aircraft to help us.

NO STOOGING NOW
You would stooge around for several minutes in extreme tension, drop a flare yourself – and hope that you had lighted up the target.
But to-day all that has changed. The target is visible for miles ahead.
Then again our attacks were individual. We had a rough bombing time. But that was all.
Now every crew bombs on the minute, and the whole raid itself is only a matter of a few minutes, thus swamping the ground defences.
When I arrived at the squadron’s station the crews were just landing after a raid on the synthetic oil plant at Ludwigshafen.
Most crews are reticent about their experiences, even if they have been tough They [sic] are the elite.
A few tend the other way, not because they want to impress you with their courage, but because they want desperately to give vent to the anxiety, the tension of mind, which they have endured.
Others, again, have a fine sense of humour.
“See any fighters ?” said the Intelligence Officer to a big blond Canadian pilot-officer in the interrogation room.
“Oh, yeah,” said the Canadian with a smile.
“Did you get a shot at him?”
“You bet. My crew’s kin’a got the aggressive spirit, I guess.”
Whereupon the whole crew laughs gaily.
Many pilots of this particular squadron have long operational records, such as the squadron C.O., Wing-Comdr. J.R. St. John, D.F.C. and bar. He has done 56 trips.
“I used to know him as a flight-lieutenant,” said one of the other pilots. “He used to come back with his aircraft like a pepper-pot.”
But there is one chap who has done no fewer than 91 trips. He is a wireless-operator, Pilot-Officer H.A. Jones, of London.
Shy, retiring, he attributes everything to luck.
He wants to complete his hundredth. He must have the heart of a lion.

MEET THE SKIPPER
I was soon introduced to the skipper of the Lancaster in which I was to fly to Ulm – Flight-Lieut. J.E. Holland, of Croydon.
Although he is only on his eleventh trip, he is a very experienced pilot, having flown for a thousand or more hours in Training Command.
I asked him for how much his long experience as a pilot would count.
“About twenty-five per cent,” he replied. “There is always the barrage. You can’t avoid that. And the pilot can’t look out everywhere. It’s up to the crew to warn me about fighters. Fortunately, I’ve got a damned good crew.”
After signing a “blood chit” – a form absolving the R.A.F. from any responsibility for my life – I practised dinghy drill and parachute escape drill with the crew.
The familiar whiff of aircraft oil, the sight of the huge open flying-field, and the being with my pals again made me feel very happy.
Our target was the famous Magirus works at Ulm, where fire-fighting equipment, armoured vehicles and jet-propelled aircraft are manufactured.
We were told that other forces of bombers would be attacking different parts of Germany, including a “spoof” force on Frankfurt to bamboozle the enemy.
The C.O. made a little speech about the danger of intruders waiting in Northern Germany to pick us off on the way back; somebody began pointing to concentrations of heavy flak on a map; then there was somebody else saying something about the danger of icing…. I wondered how we could possibly get back at all.
BETWEEN THE CLOUDS
We went out to the aircraft. It was a beautiful evening. Owing to the risk of icing at higher levels we flew low between layers and layers of drifting cloud tinged red and purple and orange by the setting sun.
Around us, Above us, and below us there were clusters of Lancasters. When one approached too close the little flight engineer would call over the intercom: “Engineer to Skipper, corkscrew right!” Immediately we would weave and turn away.
From time to time we would enter a white darkness. I wondered how other aircraft flying through the same patch of cloud would distinguish our lights.
But, above all, I wondered what would happen when we switched off our lights over enemy territory. I tried to dismiss such fears from my mind.
As we passed over the British Coast the engineer, tapping me on the shoulder, blew England a sweet kiss.
Over France the towns were illuminated like peace-time. In the old days we should have had to fly this part of the trip over hostile territory.
That made a big difference to my fears.
Presently the navigator told us that it was just an hour to the target. The skipper turned out the lights on the wing-tips.
We flew on in silence, climbing slowly to our bombing height. Every now and again we would weave slightly to avoid a suspicious-looking aircraft.
That, together with the smell of stale oxygen, made me slightly sick.
HIT, BUT O.K.
Now it is only half an hour to the target. I look out of the perspex window.
Below me I can see the flash of guns. We must be crossing the front line.
I can also see bits of red-hot metal flying about.
Underneath I hear faintly a sort of whoof-whoof sound. The pilot turns to me. I give him the thumbs-up sign. Yes, I’m O.K.
And then, all of a sudden, there is a whizz….I am not sure what is happening.
Have I been wounded? No, it must be nerves. Fearful of alarming the crew I say nothing.
Then there is another crash, and I notice there are two large holes in the perspex window.
Myself (anxiously): Something’s happening….
Skipper: Yes, what the hell is it?
Myself: I don’t know quite; must be a little flak, I think.
Skipper: Are you O.K.?
Myself: Yes, thanks. O.K.
And then ahead of us we at last see the target….
After three days with the squadron I feel I have mixed with the greatest aristocracy in the world – the aristocracy of courage, sacrifice, and devotion to duty.

“He flew with the R.A.F. to Ulm. Ex-pilot amazed by our new bombing technique,” IBCC Digital Archive, accessed December 7, 2022, https://ibccdigitalarchive.lincoln.ac.uk/omeka/collections/document/2452.