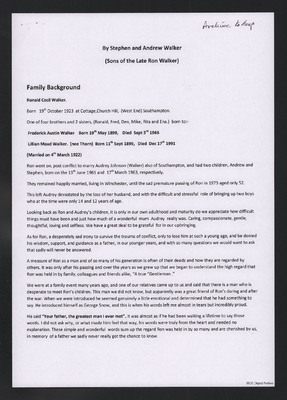 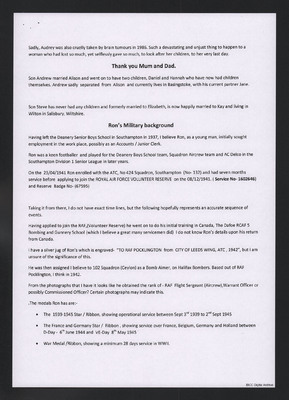 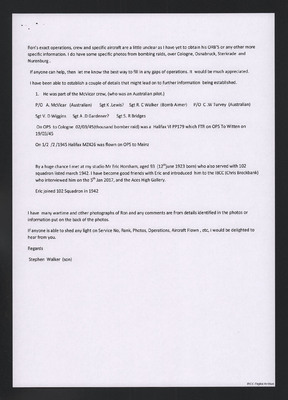 An account of Ronald Walker's life compiled by his sons.

By Stephen and Andrew Walker

(Sons of the Late Ron Walker)

One of four brothers and 2 sisters, (Ronald, Fred, Den, Mike, Rita and Ena.) born to:

Ron went on, post conflict to marry Audrey Johnson (Walker) also of Southampton, and had two children, Andrew and Stephen, born on the 13th June 1961 and 17th March 1963, respectively.

They remained happily married, living in Winchester, until the sad premature passing of Ron in 1975 aged only 52.

This left Audrey devastated by the loss of her husband, and with the difficult and stressful role of bringing up two boys who at the time were only 14 and 12 years of age.

Looking back as Ron and Audrey's children, it is only in our own adulthood and maturity do we appreciate how difficult things must have been and just how much of a wonderful mum Audrey really was. Caring, compassionate, gentle, thoughtful, loving and selfless. We have a great deal to be grateful for in our upbringing.

As for Ron, a desperately sad irony to survive the trauma of conflict, only to lose him at such a young age, and be denied his wisdom, support, and guidance as a father, in our younger years, and with so many questions we would want to ask that sadly will never be answered.

A measure of Ron as a man and of so many of his generation is often of their deeds and how they are regarded by others. It was only after his passing and over the years as we grew up that we began to understand the high regard that Ron was held in by family, colleagues and friends alike, "A true "Gentleman."

We were at a family event many years ago, and one of our relatives came up to us and said that there is a man who is desperate to meet Ron's children. This man we did not know, but apparently was a great friend of Ron's during and after the war. When we were introduced he seemed genuinely a little emotional and determined that he had something to say. He introduced himself as George Snow, and this is when his words left me almost in tears but incredibly proud.

He said "Your father, the greatest man I ever met”. It was almost as if he had been waiting a lifetime to say those words. I did not ask why, or what made him feel that way, his words were truly from the heart and needed no explanation. These simple and wonderful words sum up the regard Ron was held in by so many and are cherished by us, in memory of a father we sadly never really got the chance to know.

Sadly, Audrey was also cruelly taken by brain tumours in 1986. Such a devastating and unjust thing to happen to a woman who had lost so much, yet selflessly gave so much, to look after her children, to her very last day.

Thank you Mum and Dad.

Son Andrew married Alison and went on to have two children, Daniel and Hannah who have now had children themselves. Andrew sadly separated from Alison and currently lives in Basingstoke, with his current partner Jane.

Son Steve has never had any children and formerly married to Elizabeth, is now happily married to Kay and living in Wilton in Salisbury, Wiltshire.

Having left the Deanery Senior Boys School in Southampton in 1937, I believe Ron, as a young man, initially sought employment in the work place, possibly as an Accounts/Junior Clerk.

Ron was a keen footballer and played for the Deanery Boys School team, Squadron Aircrew team and AC Delco in the Southampton Division 1 Senior League in later years.

Taking it from there, I do not have exact time lines, but the following hopefully represents an accurate sequence of events.

Having applied to join the RAF, (Volunteer Reserve) he went on to do his initial training in Canada, The Dafoe RCAF 5 Bombing and Gunnery School (which I believe a great many servicemen did) I do not know Ron's details upon his return from Canada.

I have a silver jug of Ron's which is engraved- "TO RAF POCKLINGTON from CITY OF LEEDS WING, ATC, 1942", but i [sic] am unsure of the significance of this.

He was then assigned I believe to 102 Squadron (Ceylon) as a Bomb Aimer, on Halifax Bombers. Based out of RAF Pocklington, I think in 1942.

From the photographs that I have it looks like he obtained the rank of - RAF Flight Sergeant (Aircrew), Warrant Officer or possibly Commissioned Officer? Certain photographs may indicate this.

The medals Ron has are:

• The France and Germany Star/Ribbon, showing service over France, Belgium, Germany and Holland between D-Day – 6th June 1944 and VE-Day 8th May 1945

Ron's exact operations, crew and specific aircraft are a little unclear as I have yet to obtain his ORB'S or any other more specific information. I do have some specific photos from bombing raids, over Cologne, Osnabruck, Sterkrade and Nurenburg [sic] .

If anyone can help, then let me know the best way to fill in any gaps of operations. It would be much appreciated.

I have been able to establish a couple of details that might lead on to further information being established.

1. He was part of the McVicar crew, (who was an Australian pilot.)

By a huge chance I met at my studio Mr Eric Horsham, aged 93 (12th June 1923 born) who also served with 102 squadron listed march [sic] 1942. I have become good friends with Eric and introduced him to the IBCC (Chris Brockbank) who interviewed him on the 5th Jan 2017, and the Aces High Gallery.

I have many wartime and other photographs of Ron and any comments are from details identified in the photos or information put on the back of the photos.

If anyone is able to shed any light on Service No, Rank, Photos, Operations, Aircraft Flown, etc, i [sic] would be delighted to hear from you.