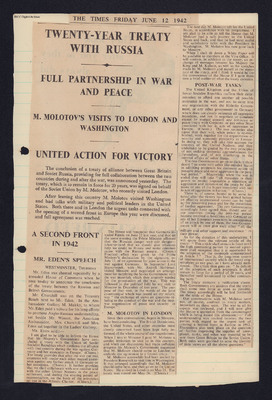 FULL PARTNERSHIP IN WAR AND PEACE

The conclusion of a treaty of alliance between Great Britain and Soviet Russia, providing for full collaboration between the two countries during and after the war, was announced yesterday. The treaty, which is to remain in force for 20 years, was signed on behave of the Soviet Union by M. Molotov, who recently visited London.

After leaving this country M. Molotov visited Washington and had talks with military and political leaders in the United States. Both there and in London the urgent tasks connected with the opening of a second front in Europe this year were discussed, and full agreement was reached.

Mr. Eden was cheered repeatedly by a crowded House of Commons when he rose to-day to announce the conclusion of the treaty between the Russian and British Governments.

Mr. Churchill was on the Treasury Bench next to Mr. Eden. In the Ambassadors’ Gallery M. Maisky, to whom Mr. Eden paid a tribute for his long efforts to promote Anglo-Russian understanding, sat beside Mr. Winant, the American Ambassador. Mrs. Churchill and Mrs. Eden sat together in the Ladies’ Gallery.

I am glad to be able to inform the House that his Majesty’s Government have concluded a treaty with the Union of Soviet Socialist Republics which confirms our alliance with that country during the war against Germany and her associates in Europe. (Cheers.) The treaty provides that after the war our two countries will render each other mutual assistance against any further attack by Germany or her associates. (Cheers.) It further provides that we shall collaborate with one another and with the other United Nations in the peace settlement, and during the ensuing period of reconstruction, on the basis of the principles set out in the Atlantic Charter. (Cheers.)

The House will remember that Germany invaded Russia on June 22 last year, and that on the same evening the Prime Minister affirmed that the Russian danger was our danger – (cheers) – and that we should give whatever help we could to Russia and make common cause with the Russian people. (Cheers.) Practical effect was given to the Prime Minister’s declaration by the signature, on July 12, of an agreement for joint action in the war against Germany. In September Lord Beaverbrook, with Mr. Averell Harriman, visited Moscow and negotiated an arrangement for supplying the Soviet Government with the war materials which they urgently needed for the prosecution of the war. This was followed in the political field by my visit to Moscow in December of last year. The purpose of that visit, in the words of the joint [italics] communiqué [/italics] which was issued on my return, was “the exchange of views on questions relating to the conduct of the war and the post-war organisation of peace and security in Europe.”

Since then conversations, begun in Moscow, have been continuing. The British Dominions, the United States, and other countries most closely concerned have been kept fully informed of the whole course of our negotiations. When I was in Moscow I gave M. Molotov a cordial invitation to visit us in this country, and when our discussions had made sufficient progress his Majesty’s Government suggested that M. Molotov should come to London to embody our agreement in a formal treaty.

M. Molotov meanwhile had been invited by President Roosevelt to visit him in Washington. It was arranged accordingly that M. Molotov should come here, and then go on to the United States. He arrived in London on May 21. The treaty was signed on May 26, (Cheers.)

When I shall sit down a White Paper will be available to members at the Vote Office. It will contain, in addition to the treaty, an exchange of messages between his Majesty the King and M. Kalinin, as well as the speeches made by M. Molotov and myself at the signature of the treaty, and I think it would be for the convenience of the House if I gave them now a brief outline of what the treaty contains.

The United Kingdom and the Union of Soviet Socialist Republics reaffirm their determination to afford one another all possible assistance in the war, and not to enter into any negotiations with the Hitlerite Government, or any other government in Germany which does not clearly renounce all aggressive intentions, and not to negotiate or conclude except by mutual consent any armistice or peace treaty with Germany, or any other State associated with her in acts of aggression in Europe. (Cheers.) The two countries also agree that they will, when peace is re-established, work together for the organization of security and economic prosperity in Europe. In doing so, they will take into account the interests of the United Nations, and they undertake to be guided by the two principles of not seeking territorial aggrandisement for themselves, and of not interfering in the internal affairs of other States.

The two Governments go on to declare their desire “to unite with other like-minded States in adopting proposals for common action to preserve peace and resist aggression in the post-war period.” Meanwhile, when the war is ended they will take “all measures in their power to render impossible a repetition of aggression and violation of the peace by Germany or any of the States associated with her in acts of aggression in Europe.” (Cheers.)

There is, of course, bound to be some interval after the victory has been gained before an effective international system can be built up for preserving peace and for the prevention of further aggression. The two Governments accordingly have agreed that, should one of our countries during the post-war period become involved in hostilities with Germany or any of her European associates in consequence of an attack by one of them, the two Governments will at once give each other “all the military and other support and assistance” in their power.

As for the duration of this undertaking, I will quote from the relevant article of the treaty: “This article shall remain in force until the high contracting parties by mutual agreement shall recognize that it is superseded by the adoption of the proposals contemplated in Article 3.” That is, the long-term system of international security which the treaty contemplates as our goal, as I have already mentioned. The article then goes on: “In default of the adoption of such proposals it shall remain in force for a period of 20 years, and thereafter until terminated by either contracting party.”

The treaty contains a ratification clause. Both Governments are anxious that the treaty shall come into force as soon as possible. The treaty accordingly will be laid forthwith on the table of the House.

Our conversations with M. Molotov were not, of course, confined to treaty matters, important as those were. The war in all its aspects was reviewed, and I will now give the House a quotation from the [italics] communiqué [/italics] which is being issued this afternoon:- “Full understanding was reached between the two parties with regard to the urgent task of creating a second front in Europe in 1942. Discussions also took place on the question of further improving the supplies of aeroplanes, tanks, and other war material to be sent from Great Britain to the Soviet Union. Both sides were gratified to note the identity of their views on all the above questions.”